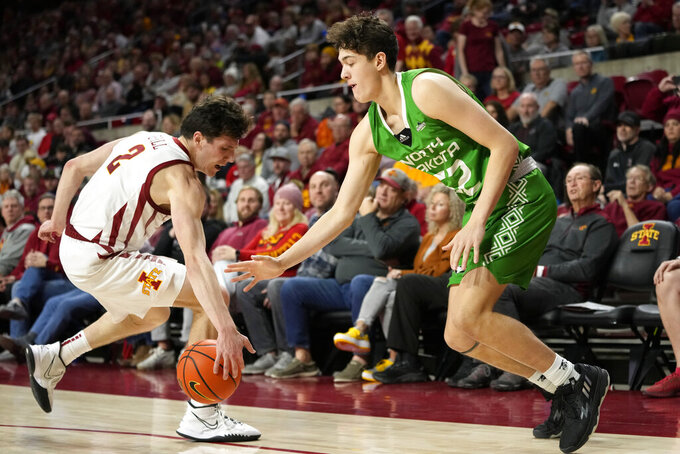 “We just have to be better mentally focused going into games like this,” Grill said. “You've got to know what the job is.”

Tamin Lipsey added 11 points and four assists for Iowa State, which used a 15-3 run early in the second half to pull away.

A dunk by Grill gave the Cyclones a 36-27 advantage and Aljaz Kunc followed with a 3-pointer.

The Fighting Hawks remained within striking distance until Lipsey made a 3-pointer to put the Cyclones ahead 53-39 with seven minutes left.

“I felt like Tamin was really good for us tonight,” Iowa State coach T.J. Otzelberger said. “Just commanding the game, control the pace, move the ball. If we had finished a little better, (Lipsey) probably would have had a few more assists.”

North Dakota was hampered by 20 turnovers. The Cyclones finished with 26 points off turnovers and 18 second-chance points.

“Difference in the whole game was points off turnovers, points off second chances,” North Dakota coach Paul Sather said. “I thought it was what really allowed (Iowa State) to go into halftime with a lead.”

Iowa State made one of its first nine shots and hit 32.4% of its attempts in the first half.

The first 20 minutes featured eight lead changes. The Cyclones held a 26-24 edge at the break.

Iowa State made its debut in the AP Top 25 after beating then-No. 1 North Carolina last week. Wednesday’s win was the Cyclones’ 15th straight at home against nonconference foes.

North Dakota heads west for its next two games, playing at Portland on Saturday and Idaho on Tuesday.