No. 3 Purdue blocks Maryland in final seconds for 62-61 win 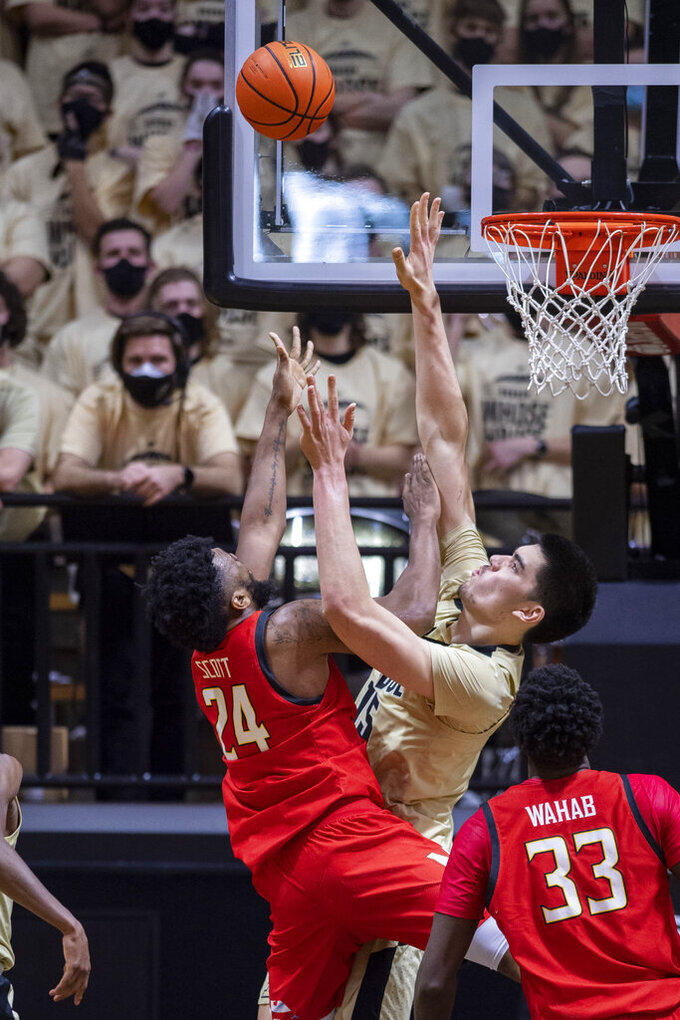 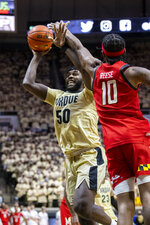 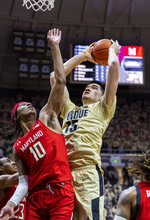 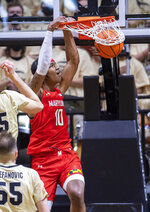 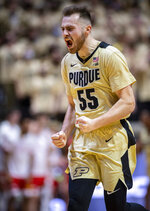 Williams rejected a layup try by Donta Scott in the final seconds and No. 3 Purdue, boosted by Jaden Ivey's go-ahead three-point play, held off Maryland 62-61 on Sunday.

“Scott is one of the best in the league and I figured it wasn't him it would be (Fatts) Russell,” Williams said of the final shot. “I had that in the back of my mind. It just comes with personnel and preparing for the game. I just did my best to wall it up and get a stop."

Scott drove hard to the basket from the right baseline, but Williams blocked the shot with five seconds left. The Boilermakers (22-4, 11-4 Big Ten) corralled the loose ball, completing a rally from a 12-point deficit midway through the second half.

“I thought we deserved to win, in the clip I saw from one of our guys on the staff, I thought Donta got fouled,” Maryland interim coach Danny Manning said.

It was 59-all when Ivey shook loose down the lane for his three-point play with 13.1 seconds left.

Russell then was fouled and hit both free throws for the Terrapins with 8.1 seconds remaining.

Purdue committed a turnover on the inbound pass, giving the Terrapins a shot. Purdue coach Matt Painter said because the clock had started in error on the previous inbound attempt, Purdue was not allowed to run the baseline.

Painter said he wasn't aware the clock had changed to 7.8 seconds and tried to run the same play. He said he asked the referee if they were just redoing it.

“To me if we are redoing this, we can still run the baseline and throw the ball along the baseline," Painter said "So that was my error. In the process of everything, I'm not locked into the time."

Ivey shot 1 for 8 before his three-point play.

“I was trying to make a play for the team, so we could win this game,” he said. “I struggled obviously, but I want to win most importantly."

Trailing 26-23 at halftime, the Terrapins regained the lead by scoring the first 12 points on the second half.

“The first half we were lethargic but we were able to limit them to 23 points,” Stefanovic said. “We had good open looks but we weren't them down. During that (14-0) stretch, we did a good job of just getting stops and making good open shots. We found people in stride where they made easy jump shots. Obviously, we played poorly, but any win is a big win for us.”

The Terrapins played without leading scorer Eric Ayala, who was out with a wrist injury. Ayala, a starting guard, is averaging 15.1 points. Xavier Green started in his place.

“We did some things well enough to give us a chance to win," Manning said. “I loved the effort and moxie. We didn’t get the outcome we wanted, but that effort and moxie gave us the chance to compete with one of the better teams in the country.”

Maryland: The Terrapins gave the Boilermakers all they could handle, but came up short in losing for the fourth time in five games.

Purdue: The Boilermakers found a way to win, but it was a rugged showing against a struggling Maryland team without its leading scorer in Ayala. “We have to do a better job of getting ourselves ready to play, no matter what the circumstances,” Painter said.

The No. 3 Boilermakers will likely slide in the rankings with an up-and-down week. After registering an impressive 84-68 victory over No. 13 Illinois at home on Tuesday night, the Boilermakers fell flat in an 82-58 loss at Michigan on Thursday night.

Purdue: At Northwestern on Wednesday night.