No. 5 Kansas opening season without Hall of Fame coach Self 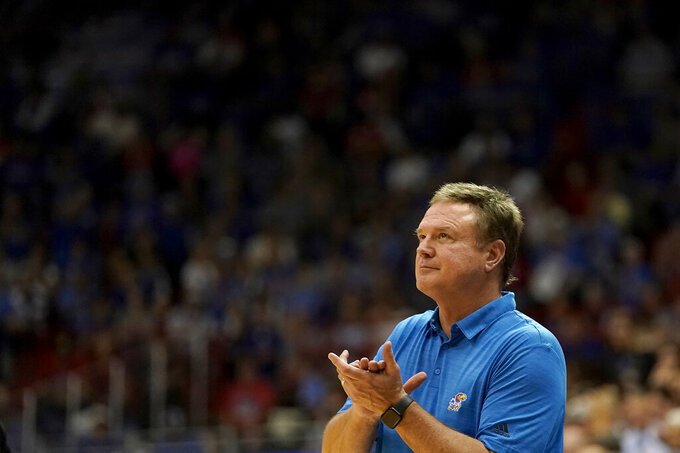 LAWRENCE, Kan. (AP) — There will be something missing from what should have been a festive occasion Monday night at Kansas, when the No. 5 Jayhawks celebrate their latest national championship before opening the new season against Omaha.

Namely, their head coach Bill Self.

Rather than following his team to the court for pregame introductions, Self will probably be sitting at home, forced to watch on TV while beginning a four-game suspension. Kansas officials imposed the punishment on its coach and assistant Kurtis Townsend as part of the fallout of a lengthy FBI investigation into college basketball corruption.

Norm Roberts, who spent six seasons as the head coach at St. John's, will serve as the acting coach.

“Norm and I have been together off-and-on since ‘95," Self said, "and he’ll probably be a voice that the players probably enjoy and respect hearing far more than they have been hearing.

“I think it's something (where) hopefully we can become more mature," he added, "and if that's the case, it's still not good by any stretch. But I have to own it, though, and our players have to make the most of it, and I believe they will.”

Self was allowed to coach the Jayhawks in their lone exhibition, when they overcame a sluggish start against Division II Pittsburg State in a 94-63 win. And the terms of the school-administered suspension allow him to coach the Jayhawks any day but game day, which means the Hall of Fame coach will still largely determine the game plan.

He just won't be on the sidelines against Omaha, North Dakota State and Southern Utah or a showdown against seventh-ranked Duke in the Champions Classic next week in Indianapolis.

Self and Townsend will be back on the bench to face North Carolina State at the Battle 4 Atlantis on Nov. 23.

“Norm will go into the game knowing who the first big off the bench is, who the first guard off the bench is. He knows what plays we'll script,” Self said, “but he'll be in charge. He will be in charge. I'll be at practice, but everything that happens after 12 a.m., that's going to be Norm's call. And as a coach, you really hope nothing happens after 12 a.m.”

Jeremy Case, who helped the Jayhawks win the 2008 national title, will be alongside Roberts on the bench. The Jayhawks also can use Joe Dooley, a longtime assistant and now director of student-athlete development, and Brady Morningstar, a former player who usually serves as the video coordinator, as fill-in coaches on game day.

Still, it's hard to substitute for a two-time national champion coach who's won more than 81% of his games at Kansas.

“Norm will do a great job. The guy has been a head coach in the Big East,” Self said. “We've been together a long time, and there's a correlation in us being successful and who your coaches are, and we've had the best staff. I don't know anybody can compare the staff we've had over time, and Norm has been a huge part of that.”

The suspensions, along with a series of recruiting penalties, were punishment for an infractions case that stems from a federal investigation in 2017 that led to the conviction of a shoe company executive, a middleman who worked with them and several assistant coaches. It involved Kansas along with Arizona, LSU, Louisville and North Carolina State.

When it came to the Jayhawks, the issue was whether representatives of apparel company Adidas were acting as boosters — the school contends they were not — when they arranged payments to prospective recruits. Kansas never disputed that the payments were made, only that it had any knowledge the inducements were happening.

The school asked that the case be decided by the Independent Accountability Resolution Process, which was created to handle particularly complex cases and acts outside the purview of the NCAA. But the soon-to-be disbanded panel has been painfully slow in its work, and it remains unclear when — or even if — there will ever be a conclusion.

Rather than wait out the process, Kansas imposed penalties last week in a gesture it hopes will mitigate any additional punishment. Self will sit out the next four games — an important developmental period for his young team — and put his trust in Roberts, who hasn't been a head coach since he was fired by St. John's in 2010.

“We have a culture that's been built here,” Roberts said. “I've been with Bill a long time. We kind of end each others' sentences. And we talk about how faces change but expectations don't. Our players know our expectations are what they are at Kansas, and what we do on the court doesn't change.”