Peterson's 3 with seconds left lifts No. 16 USC over Oregon 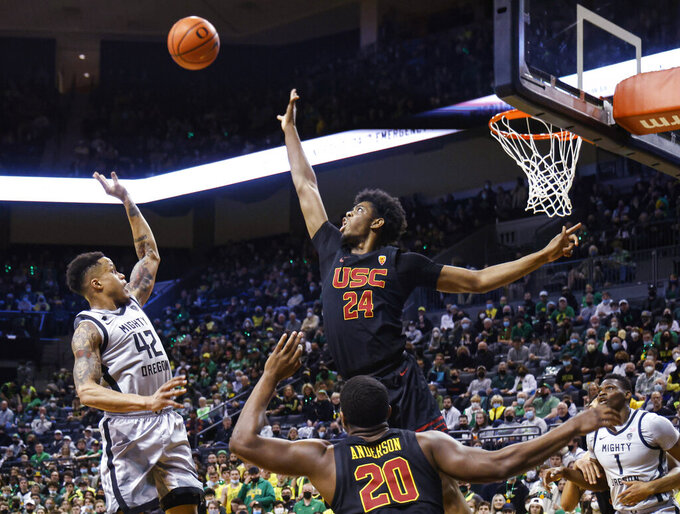 “Very proud of players, we played outstanding game,” USC coach Andy Enfield said. “It was a hostile environment, a lot of energy in the building. It was a great crowd. Their students were swearing at our players and throwing things in the tunnel afterwards but we came through with a big road win.”

Guerrier put the Ducks ahead 69-67 on a 3-pointer with 23 seconds remaining before Peterson answered with a 3-pointer. Oregon’s Will Richardson missed a shot at the buzzer.

“That was definitely cool,” Peterson said. “We set a high ball screen and they went under it. I saw a bit of space and decided to pull up, thankfully it went in. Then we got a stop. We worked our butts off tonight. Everyone contributed and we won in a crazy environment.”

With 3:04 left to play, Young beat the shot clock with a deep 3-pointer to put Oregon ahead 64-61 before Mobley made two free throws of the Trojans. Harmon then drove for an Oregon basket before Max Agbonkpolo answered with a bucket to get USC within 66-65 with 1:26 to play.

Mobley drove for a basket that put the Trojans up 67-66 with 41 seconds left, but Guerrier followed with a 3-pointer for the Ducks

USC went up 51-45 on a dunk by Chavez Goodwin before Harmon followed with a 3-pointer for the Ducks. Kobe Johnson followed with a bucket for the Trojans before Oregon scored six straight points to take the lead on two free throws by Dante.

The Trojans went back into the lead on a 3-pointer by Mobley with 7:52 left in the game.

Oregon rallied from an 12-point deficit in the first half to take a 32-31 lead at the break.

The Ducks tied the game 17-17 on a bucket from Dante before USC followed with 11 points in a row. Drew Peterson scored seven points during the stretch before Goodwin made a couple free throws to put the Trojans ahead 28-17.

Reese Dixon-Waters made a 3-pointer to put USC ahead 31-19 with 4:57 left in the half before Oregon scored the final 13 points before halftime. Eric Williams Jr. dunked twice during that span before Harmon made a free throw to get the Ducks within 31-29.

Young added a free throw and Guerrier added two more free throws to put the Ducks into the lead at the break.

USC: The Trojans are 25-4 to set a record for best start in school history. … USC has won 72 games over the past three seasons, matching the school record set from 2016-18. … Junior guard Boogie Ellis, who ranks third on the team in scoring at 12.9 points per game, returned to the starting lineup after missing Thursday’s game at Oregon State due to an ankle injury.

Oregon: Oregon is 59-69 all-time against USC, but Altman is 15-7 against the Trojans during his time with the Ducks. … Oregon sits alone in fourth place in the Pac-12 heading into the final week of the regular season as it looks to wrap up a first-round bye in the conference tournament.

USC: The Trojans host No. 2 Arizona on Tuesday night.