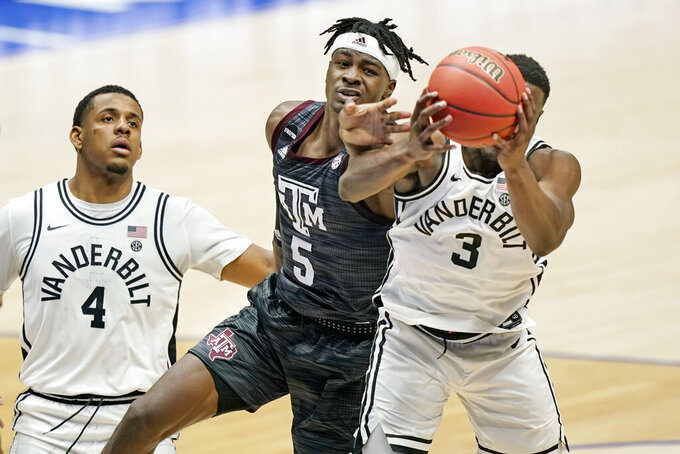 Texas A&M's Emanuel Miller (5) reaches for a rebound with Vanderbilt's Maxwell Evans (3) in the second half of an NCAA college basketball game in the Southeastern Conference Tournament Wednesday, March 10, 2021, in Nashville, Tenn. (AP Photo/Mark Humphrey)

No. 12 seed Vanderbilt (8-15) snapped a four-game skid against the Aggies although the teams didn't play in the regular season after both scheduled matchups were canceled due to COVID-19 concerns. Second-year coach Jerry Stackhouse got his first conference tourney win and the Commordores' first since beating Texas A&M 66-41 in 2017.

Pippen, a first-team all-SEC selection, shot just 3-of-17 from the field but tied his career high for free throws made and added six assists, four rebounds and three steals.

Pippen, a 6-foot-3 sophomore, hit a 3-pointer, made a pair of free throws and then took a steal near midcourt for a dunk in a 77-second span to spark a 15-3 run that made it 17-7 and his three-point play with 16:17 to play gave the Commodores a 45-32 lead. Texas A&M scored the next 13 points to tie it about four minutes later. But Myles Stute answered with a 3 and Vanderbilt led the rest of the way.

The Commodores, who hit 12 3-pointers and outscored the Aggies 21-7 from the foul line, play fifth-seeded Florida in Thursday's second round.