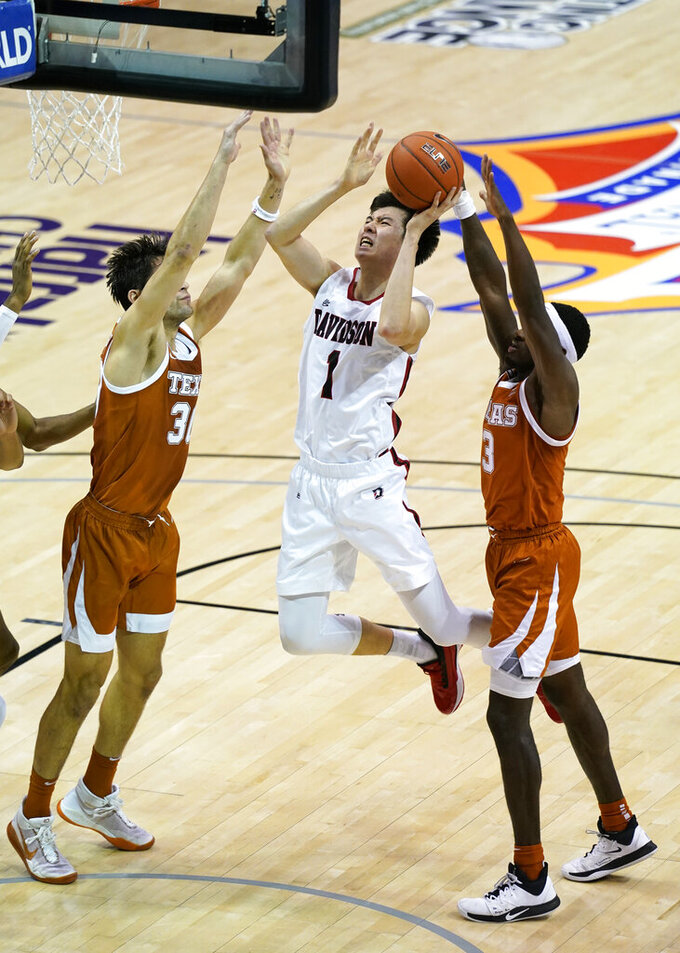 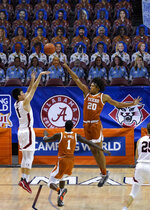 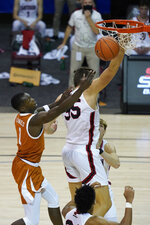 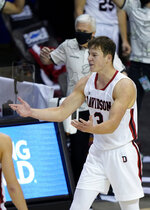 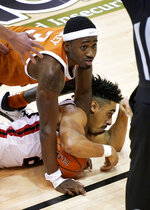 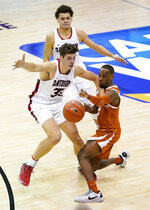 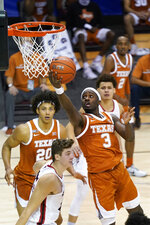 ASHEVILLE, N.C. (AP) — Courtney Ramey and No. 17 Texas offered a glimpse Monday of the Longhorns' potential depth to start the relocated Maui Invitational. Coach Shaka Smart wants to see the defense look a little sharper, too.

Ramey hit the go-ahead driving score with 20 seconds left and the Longhorns survived a pair of final-possession Davidson shots for the win to beat the Wildcats 78-76 in Monday's tournament opener.

Texas (2-0) shot 48% and led nearly the entire second half, yet missed too many free throws and struggled to get stops as Davidson (1-1) shot nearly 57% for the game.

“We've got a long way to go defensively with our guys and 1-on-1 defense,” Smart said. “I think as a team they know that. But certainly learned about our guys’ resolve. They showed good resolve."

Ramey’s score broke a 76-all tie, then the Longhorns came up with a pair of stops. Davidson’s Sam Mennenga missed a contested 3-pointer from the wing, but the Wildcats got another shot when the ball went out of bounds with 3.8 seconds left.

The Wildcats inbounded again to Mennenga, who missed a final 3 for the win with Texas’ Andrew Jones closely defending him. Mennenga turned toward a nearby official at the horn, while Davidson coach Bob McKillop also walked onto the court with arms extended to address officials briefly.

“You obviously have never seen me protest because that was very kind,” McKillop said. “My comment to him after the game was far from a protest. I just asked him very gentlemanly: ‘Do you think he got hit on that last play?’"

Ramey scored 14 points to lead the Longhorns, who had six players in double figures. Mennenga, a 6-foot-9 redshirt freshman from New Zealand, had 17 points and five rebounds to lead Davidson.

Texas: The Longhorns had an easy opener in Wednesday’s 91-55 win against Texas-Rio Grande Valley. They got a boost Monday with the season debut of Jones, who missed most of the 2017-18 and 2018-19 seasons after a leukemia diagnosis. Jones didn’t play in the opener for precautionary reasons due to a cough, though Smart said he had a negative COVID-19 test. Jones looked good against Davidson and finished with 13 points, but Texas made just 16 of 24 free throws in this one.

Davidson: The Wildcats returned four starters from last season and were picked to finish seventh in the Atlantic 10. They shot 62% after halftime of their season-opening win against High Point and carried that momentum into this one by making 10 of their first 13 shots. But they went without a basket for nearly six minutes in the first half, then had another four-minute basket drought amid a series of second-half turnovers, stretches that loomed large by the end of a tight fight to the horn.

Ramey was just 3 of 10 from the floor before his winning shot, getting a step on Carter Collins beyond the arc. As Ramey drove toward the rim, Davidson big man Luka Brajkovic got caught trying to defend both Ramey and Jericho Sims at the other side of the paint.

“I saw an open lane,” Ramey said, adding: “Jericho did a good job in the game of just making himself available, so they had to take him away, which freed me up.”

Texas thrice built seven-point leads in the second half, the last time coming on Sims’ whistle-drawing dunk to make it 72-65 with 5:06 left. But Davidson hung in and fought back to tie it on Brajkovic’s hook shot with 62 seconds left, setting up the final sequence.

The tournament is being played in the North Carolina mountains instead of its traditional Hawaii setting due to the coronavirus pandemic, giving the Wildcats a home-state game with seats filled by fan cutouts and pumped-in crowd noise.

There was also the sight of the customized team-themed surfboards, a tournament tradition, in one end of the arena.

Texas: The Longhorns advanced to the semifinals, where they face Indiana on Tuesday.

Davidson: The Wildcats fell into the consolation bracket to face Providence on Tuesday.