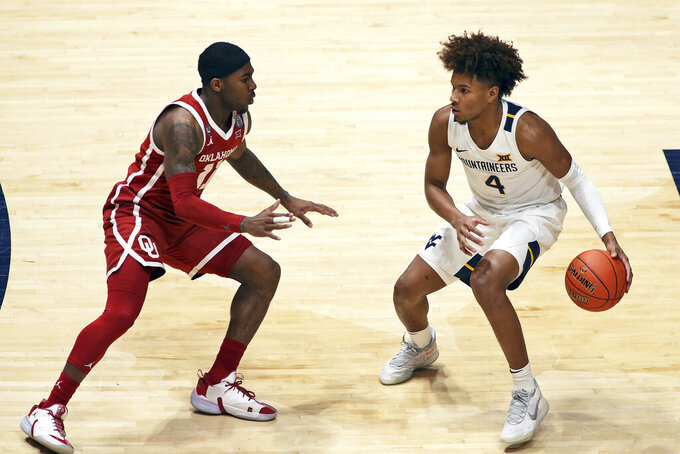 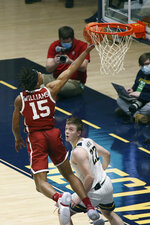 MORGANTOWN, W.Va. (AP) — Austin Reaves helped No. 12 Oklahoma pull off an impressive win on the road.

Reaves scored four of his 28 points in the final minute of the second overtime and the Sooners held off No. 14 West Virginia 91-90 on Saturday.

“Just a heck of a ballgame," coach Lon Kruger said. "There wasn’t much margin either way throughout. Guys on both teams were fighting like crazy, making big-time plays, big-time stops.”

The Sooners couldn't hold on to a 66-57 lead with six minutes left in regulation and had to depend on Reaves to pull this one out.

Reaves went 10 of 20 from the floor in his second game back since missing two games while in COVID-19 protocols. He also had nine rebounds and seven assists.

“Austin’s a big-time competitor," Kruger said. "He wants the ball in late-game situations. He doesn’t shy away from anything.”

Derek Culver had his 10th double-double of the season with a career-high 29 points and 14 rebounds for the Mountaineers (14-6, 7-4). He had averaged 6.5 points in six previous games against the Sooners.

Culver scored seven points in the second overtime to put West Virginia ahead 88-85 with 2:12 left. De’Vion Harmon’s layup and two free throws by Reaves gave the Sooners the lead before Miles McBride’s layup with 41 seconds left put the Mountaineers up 90-89.

Reaves capped the scoring with a floater in the lane over McBride with 27 seconds left. The shot “felt good, but there was still time on the clock and we had to get a stop and a rebound,” he said.

There certainly was plenty of drama left.

Culver’s layup attempt with 7 seconds left was blocked by Oklahoma’s Kur Kuath and the ball went out of bounds back to the Sooners. West Virginia got it right back on a tie-up during the ensuing inbounds pass.

After the ball went out of bounds again and West Virginia kept possession, McBride lofted a pass underneath the basket to Culver. But Culver missed a pair of rushed shots in a crowd as time ran out.

West Virginia coach Bob Huggins said his players were tired after returning late from a win at No. 7 Texas Tech on Tuesday and never fully regained their focus and concentration.

“We have to play with an edge, and we didn’t,” Huggins said.

Oklahoma: The Sooners have won seven of their last eight games, including five against ranked opponents.

West Virginia: Since big man Oscar Tshiebwe left the team on Jan. 1, West Virginia has gone 6-4 but still holds hopes of maintaining a high seed in the NCAA Tournament.

Oklahoma could climb back into the top 10 of the AP Top 25. West Virginia shouldn't see much of a drop.

Oklahoma hosts No. 13 Texas on Tuesday.

West Virginia plays at Texas on Feb. 20. The Mountaineers have won four consecutive conference road games. Games next Monday and Thursday against No. 2 Baylor were postponed because of COVID-19 issues with the Bears.