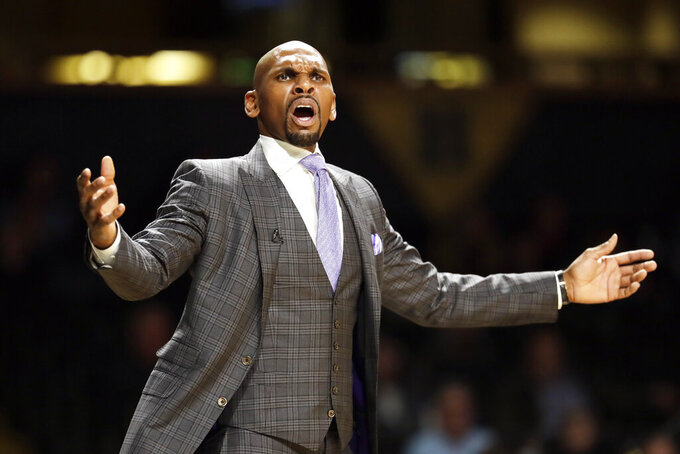 NASHVILLE, Tenn. (AP) — Jerry Stackhouse was in a joking mood moments after winning his coaching debut.

"Eight hundred seventy-eight more and then I'll tie Coach Smith," kidded Stackhouse about his college coach at North Carolina, Dean Smith, one of college basketball's winningest coaches with 879 career wins. "You know what I'm saying, so I'm well on my way."

Vanderbilt ended a 20-game losing streak in Stackhouse's coaching debut, and Aaron Nesmith led the way with 25 points, including a career-high seven 3-pointers in an 83-65 win over Southeast Missouri State on Wednesday night.

Stackhouse inherited a 9-23 team that is coming off the worst season in school history, including a 0-18 record in the Southeastern Conference under former coach Bryce Drew.

The first black coach at Vanderbilt, Stackhouse was a Memphis Grizzlies assistant last season and played in the NBA for 18 years.

"Just constant repetition," said Nesmith about his 3-point success. "Just working in practice, working on my own, just making sure it's the same form every time."

Nesmith hit 7 of 11 from 3-point range as the Commodores ended their long drought.

"I've been waiting for this for about, like, 11 months," Nesmith said. "It's been awhile. Brand new team, practically all freshmen.""

Saben Lee added 21 points off the bench and Clevon Brown added 15 for the Commodores.

The game was tied at 44 early in the second half before the Commodores started to pull away.

"I thought our guys started to focus in on things they can't control," said Southeast Missouri's Ricky Ray, a former Mississippi State coach. "You know, not getting a call from a referee. Not having experience. 'Hey, I got a great shot, it didn't go in.'"

The Stackhouse era got off to a rousing start with the Commodores seizing an 11-0 lead, including three straight 3-pointers to open the game.

Southeast Missouri answered with a 16-2 run, sending the teams into halftime tied at 32.

Chris Harris led the Redhawks with 15 points as the junior guard hit 6 of 9 from the floor. Quatarrius Wilson had 12 points and 13 rebounds.

"We've just to come out with more urgency," Wilson said. "Punch them in the mouth, basically."

The first 1,000 fans were given "Stack's House" T-shirts to celebrate Stackhouse's arrival.

Former Chicago Bulls star Scottie Pippen was in the crowd watching as his son, Scotty Jr., made his Vanderbilt debut, starting at point guard as a freshman. Pippen had a game-high six assists and seven points.

Southeast Missouri State: The Redhawks suffered their 22nd consecutive loss to an SEC team. Their only win came during the 1924-25 season against Arkansas.

Vanderbilt: The Commodores got a much-needed win, getting off to a fresh start under their new coach.

Lee is one of one of Vanderbilt's top returning scorers, so it was surprising to see him come off the bench. Stackhouse said he's trying to stagger Lee and Nesmith, the team's top scorers, with Pippen running the floor.