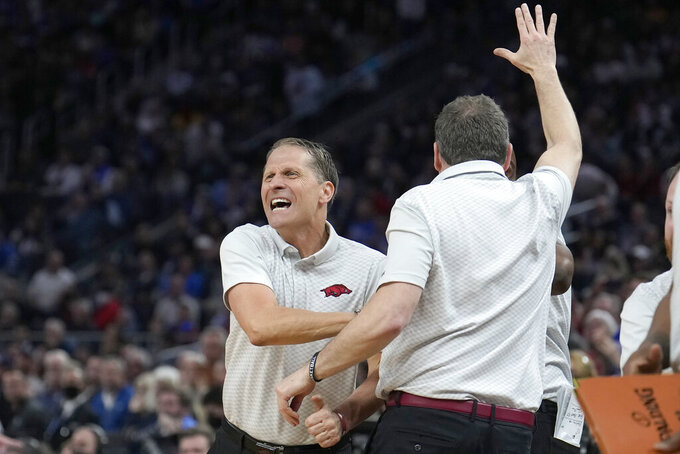 Arkansas head coach Eric Musselman, left, celebrates during the second half of a college basketball game against Gonzaga in the Sweet 16 round of the NCAA tournament in San Francisco, Thursday, March 24, 2022. (AP Photo/Tony Avelar)

A look at what’s happening in the NCAA Tournament on Saturday:

Mike Krzyzewski would pass John Wooden for most Final Four appearances if No. 2 seed Duke can beat fourth-seeded Arkansas in the West Region final in San Francisco. UCLA's Wizard of Westwood went to the national semifinals 12 times between 1962-1975.

For Coach K to get there for a 13th time, and first since the 2015 national championship season, Duke might need to be as sharp offensively as it was against Texas Tech on Thursday. Jeremy Roach, Paolo Banchero and the Blue Devils shot 71% from the field in the second half and made their last eight shots against one of the best defensive teams in the country in a 78-73 victory.

JD Notae and Arkansas have been playing great defense in the tournament, too, allowing 62.3 points per game and becoming one of just four teams to hold Gonzaga under 70 points in a 74-68 win.

The Arkansas-Duke game will be the first meeting of the teams since the Razorbacks beat the Blue Devils 76-72 in the 1994 national championship game.

Those Hogs were led by Corliss “Big Nasty” Williamson and Scott Thurman. Grant Hill and Cherokee Parks were the big names for Duke.

Nolan Richardson's “40 Minutes of Hell” style of up-tempo offense and lockdown defense wore down opponents. But the title game was tight all the way to the end and not decided until Thurman's tiebreaking 3-pointer with under a minute to play.

The tour of San Francisco’s sights continued for coach Eric Musselman and his Arkansas team Friday. The longtime Bay Area guy who coached the Golden State Warriors and Sacramento Kings took the Hogs to the San Francisco Giants’ picturesque ballpark by the bay for a quick look before getting back to preparations for Duke.

A sign on the scoreboard welcomed the Razorbacks and congratulated them on their run.

“Ballpark was awesome,” Musselman said via text message moments before heading to practice a short distance away at Chase Center. Earlier in the week, the Razorbacks were treated to a cable car ride after a visit to Niagara Falls last weekend while in Western New York.

Musselman handed out hats from the local professional teams for his players to wear on the flight from Fayetteville to San Francisco — Giants, Oakland Athletics and Warriors.

Villanova star Collin Gillespie says he's OK to play in the South Region final against Houston in San Antonio after banging his left knee in a collision late in Thursday's 63-55 win over Michigan.

“I trust in my surgeon and everything that he did for me. So it’s stable,” he said Friday. “It’s just one of those things where, if you get hit, it feels a little uncomfortable, but I’m fine now. I feel good.”

The state of Texas has been good to Villanova in the NCAA Tournament. The Wildcats claimed their last two national titles in the Lone Star State — 2016 in Houston and 2018 in San Antonio.

The win over Michigan on Thursday set up No. 2 seed Villanova's matchup with fifth-seeded Houston.

Not all the Wildcats' memories of Texas are good, though. The Wildcats lost 57-36 to Baylor in Waco in December.

Houston will have another huge fan following for the game against Villanova. The city of Houston is about a three-hour drive from San Antonio, and the Cougars' faithful has shown up, even Hakeem Olajuwon and other members of the Phi Slama Jama teams of the early 1980s.

“We’re expecting a road game,” 'Nova coach Jay Wright said. “What’s funny, we never thought about it until I started watching that (Houston-Arizona) game last night when our game was over. Then it hit me. Like wow, we’re in for it, man.”

‘THE DREAM’ HAS SPOKEN

Hakeem Olajuwon, known as “The Dream” during his Phi Slama Jama days, told reporters after the 72-60 victory over top-seeded Arizona that he admires the Cougars for knowing how to win and how to be tough.

“It’s always nice getting high praise from one of the best players to play the game,” the Cougars' Kyler Edwards said. “So just having that praise from him and the way he likes how we play the game is just good for us.”