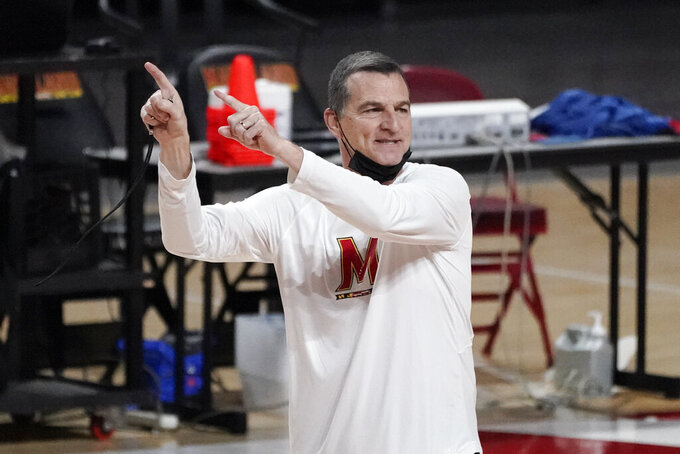 COLLEGE PARK, Md. (AP) — Maryland coach Mark Turgeon has a roster that in many ways reflects the new normal in college basketball.

His leader in minutes last season left early for the NBA. Another starter departed as a transfer. But the Terrapins added several transfers of their own, and with Eric Ayala and Donta Scott returning, it will be up to Turgeon to make sure this group of players forms a good mix.

“The (transfer) portal was good for us last year. The year before it wasn't quite as good for us. It's part of our game,” Turgeon said. "We want to blend it. We still want to sign some high school players, but we want to make sure we can add players to make us good.”

Maryland went 17-14 last season, and the Terps were every bit as inconsistent as that record suggests. They won at Illinois but lost at Northwestern and Penn State. They reached the NCAA Tournament and beat Connecticut before bowing out in a blowout loss to second-seeded Alabama.

The Terps have won at least 23 games in five of the last seven seasons, missing the NCAA Tournament only once in that span — not counting the year the event was called off because of the coronavirus pandemic. But Maryland has reached the Sweet 16 just once under Turgeon and hasn't gone further.

“I'm a blessed guy," said Turgeon, who is entering his 11th season as the team's coach. “At some point, I'm going to be blessed enough to make a run in the NCAA Tournament. We've been really consistent.”

The Terrapins have to replace guard Aaron Wiggins, who started 30 games last season before leaving for the NBA draft. Guard Darryl Morsell transferred to Marquette.

Maryland welcomes several transfers to the fold this year, including forward Qudus Wahab from Georgetown and guard Fatts Russell from Rhode Island.

The Terrapins are ranked No. 21 in the preseason AP Top 25, the fifth-highest team in the Big Ten.

The 6-foot-5 Ayala is back after leading the team with 15.1 points per game last season. Scott, a 6-foot-7 forward, also returns after averaging 11 points and a team-high 5.9 rebounds.

Scott's childhood home in Philadelphia was recently destroyed by Hurricane Ida. Around $60,000 was raised to help his family recover.

“Terp Nation stepped up through a GoFundMe, did great things for their family,” Turgeon said. “Really proud of our fan base and what they were able to do.”

Scott said the response amazed him.

“I didn't expect it to be that big of a number,” he said. “Just seeing that people were willing to give, it meant more than money.”

The Terrapins dropped three games against Big Ten champion Michigan last season, and their matchups turned contentious at times. An altercation involving both coaches during a Big Ten Tournament game led to the ejection of Michigan's Juwan Howard and a technical foul on Turgeon. The fact that Wolverines star Hunter Dickinson is from the Washington, D.C. area only adds to the intrigue.

Michigan does not play at College Park this season, but the Terps visit the Wolverines on Jan. 18.

The rest of Maryland's schedule includes a Dec. 1 home game against Virginia Tech, a matchup with Florida in New York on Dec. 12 and a trip to the Bahamas in late November. No. 7 Purdue, the other Big Ten team in the preseason top 10 along with No. 6 Michigan, doesn't come to College Park either.

The Terps open the season against Quinnipiac on Nov. 9.