Vescovi, Zeigler lead No. 17 Tennessee over No. 3 Auburn 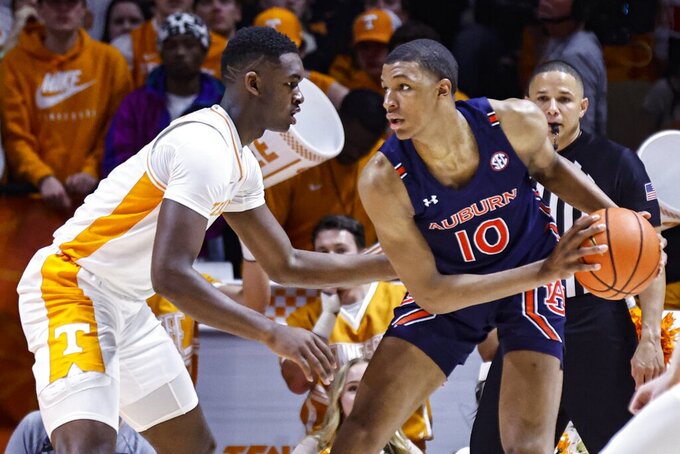 Auburn forward Jabari Smith (10) works for a shot as he is defended by Auburn guard K.D. Johnson (0) during the first half of an NCAA college basketball game Saturday, Feb. 26, 2022, in Knoxville, Tenn. (AP Photo/Wade Payne) 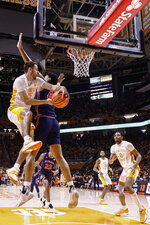 KNOXVILLE, Tenn. (AP) — It had been 27 games since Brandon Huntley-Hatfield made a 3-pointer. Since then, he had missed eight attempts.

The 6-foot-10 freshman for No. 17 Tennessee was an unlikely hero Saturday when he connected early in the second half as the Volunteers trailed by 11 points. His shot ignited a 17-2 run that was instrumental in a 67-62 victory over No. 3 Auburn.

“I was getting ready to shoot,” Huntley-Hatfield said. “I shot with confidence and it went in. I'm not going to lie, I didn't know we were down by 11.”

Santiago Vescovi scored 14 points and Zakai Zeigler had 11 of his 13 points in the second half as Tennessee (21-7, 12-4 Southeastern Conference) improved its record at home this season to 15-0. Kennedy Chandler scored 13 points and Josiah-Jordan James had 10 points and 9 rebounds.

Tennessee coach Rick Barnes said he had a simple question for his players: “How are we going to be when it's not going our way?”

That's when Huntley-Hatfield, Zeigler and others answered.

“In the second half, we figured out how to attack (Auburn),” Vescovi said. “We saw where their weak spots were at and started moving the ball.”

Barnes said he told his team that “if we get it going on defense” the more than 21,000 fans in Thompson-Boling Arena will “come to life.” Vescovi said ”the crowd helped a lot.”

The Tigers went over eight minutes in the second half without making a basket.

Tennessee dominated 54-31 on the boards. Huntley-Hatfield had five offensive rebounds and eight total. John Fulkerson, who has been battling a hip pointer, had six offensive boards and nine total.

“(Huntley-Hatfield) has come so far in so many areas,” said Barnes. “I love the focus he has getting ready for a game.”

“They didn't have an answer for us rebounding-wise,” said Huntley-Hatfield, who finished with 5 points. “The put-back dunk I had was the play I liked the best.”

Auburn: Zep Jasper may be an X-factor for the Tigers heading into the postseason. He missed a couple games recently with an illness, then didn’t hit a bucket against Alabama, Texas A&M, Vanderbilt and Florida. He scored 15 in Auburn’s win over Mississippi earlier this week. ... Pearl called playing in Knoxville the equivalent of a Final Four game, and he knows what it’s like: He was the Vols coach from 2005-11.

Tennessee: Barnes is still working to get youngsters Jonas Aidoo and Brandon Huntley-Hatfield in the regular rotation at power forward. Since Olivier Nkamhoua (ankle surgery) was lost for the season, those two have tried to fill in but are just starting to earn confidence. ... Auburn is the ninth top-25 team Tennessee has played this season.

Auburn: At Mississippi State on Wednesday.

Tennessee: Makes its final road trip of the regular season to face Georgia.