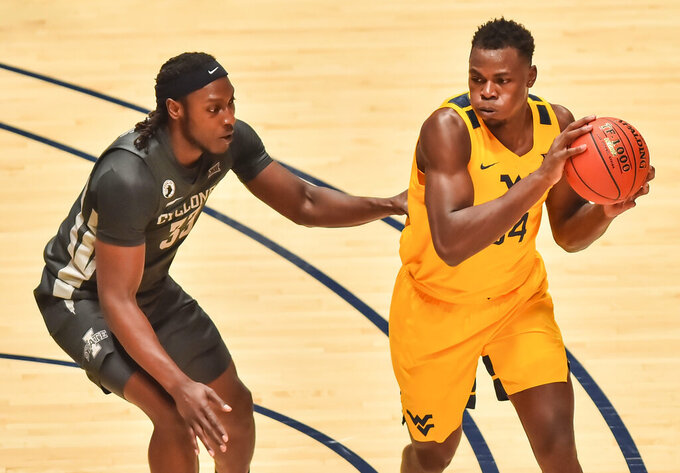 MORGANTOWN, W.Va. (AP) — West Virginia forward Oscar Tshiebwe has left the team for personal reasons and with no plans to return this season. His absence is a blow to the ninth-ranked Mountaineers heading into the heart of the Big 12 schedule.

“Did it catch me by surprise? No,” coach Bob Huggins said during a conference call Friday. "What do we do going forward? We win more games."

Huggins didn't specify why Tshiebwe left or why the coach felt the move wasn’t unexpected. When asked if there was a chance the 6-foot-9 Congolese sophomore would return, Huggins said, “No, absolutely not. No return.”

“Most of the time when I do think, I think too much,” Tshiebwe said. “I had a really good conversation with coach Huggins. He said, you don’t need to think. Make a play. Now I know what I got to do to dominate. You just need to play hard. That’s the game I always need to play.”

Huggins eventually cut off questions concerning Tshiebwe and set his attention on his other players and the Big 12 schedule, starting with Saturday when West Virginia (8-2, 1-1 Big 12) plays at Oklahoma (5-2, 1-1).

"Personally, I'm excited for what those guys can do," Huggins said.