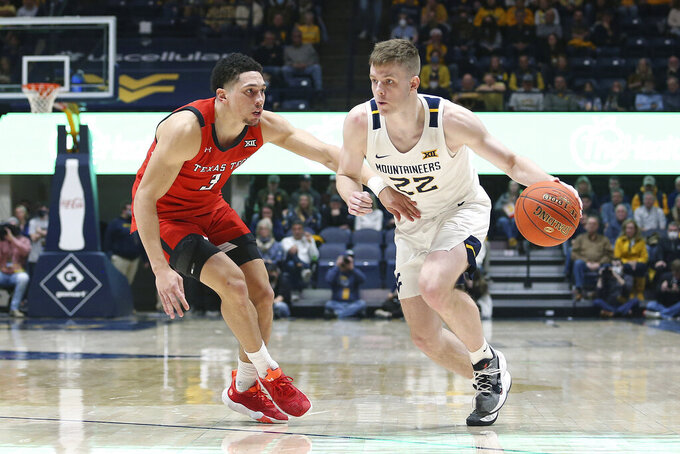 MORGANTOWN, W.Va. (AP) — Terrence Shannon yelled after falling to the floor following a first-half dunk and had to be helped off the court, dragging his right leg.

He returned in time to help No. 14 Texas Tech get a rare road win.

“It was ugly, but I'm certainly excited and proud of our guys," Texas Tech coach Mark Adams said. “These are the type of games that we can build on, build character and toughness from.”

Under the first-year coach, the Red Raiders (18-5, 7-3 Big 12) have matched their win total from each of the past two seasons.

And while Texas Tech won for the second time in six road games, the Red Raiders have won three straight and five of their last six, with the lone loss at Kansas in double overtime.

“We knew that we only had one win on the road, and we wanted to change that tonight,” Williams said. “We just came with our hard hats and went to work.”

“You can't win when you're 4-for-32,” West Virginia coach Bob Huggins said.

After Shannon's awkward fall, Adams said he didn't expect his second-leading scorer, who had a season-high 23 points in an earlier meeting with West Virginia, to return.

“He was in pain, but he was also, I think, scared at the same time,” Adams said.

When Shannon did come back, the Red Raiders took control.

“He went to work and played hard,” Adams said.

Shannon gave Texas Tech its first lead of the second half with a layup and free throw, and later made a jumper and a layup to extend the lead to 48-41 with 8:01 remaining.

“He's a warrior. That fall was something serious,” Williams said of Shannon. “He just came in and gave us a spark. That's the warrior's mentality that we try to embody here.”

Gabe Osabuohien made five free throws over the span of a minute to pull West Virginia within 53-50 with 3:40 left. Despite their shooting woes, the Mountaineers still had a chance to tie it late but couldn’t convert.

Williams sank a pair of free throws with 1:46 left and Daniel Batcho dunked on a fast break with 1:27 remaining to help seal the win.

Jalen Bridges scored 16 points and Sean McNeil added 15 for West Virginia (13-9, 2-7), which has lost seven straight, tied for the worst under Huggins.

West Virginia’s Taz Sherman, the Big 12’s second-leading scorer who is averaging 18.9 points per game, missed the game with a concussion after getting hit in the jaw late in a loss at Baylor on Monday.

Bridges made up for Sherman’s absence early with a double-digit performance for just the second time in the past six games, but went scoreless after halftime.

Texas Tech: The Red Raiders trailed at halftime for only the fourth time this season. It was the second time they came back from a halftime deficit to win.

West Virginia: The Mountaineers have plenty of work to do in order to be considered for an at-large berth in the NCAA Tournament. But the challenge gets tougher with every game Sherman isn’t in the lineup. He missed a January loss at Texas due to COVID-19 protocols and needed several games to get back to full strength.

Texas Tech could inch toward its best ranking of the season in the AP Top 25 poll after reaching No. 13 on Jan. 24.

Texas Tech: At Oklahoma on Wednesday.