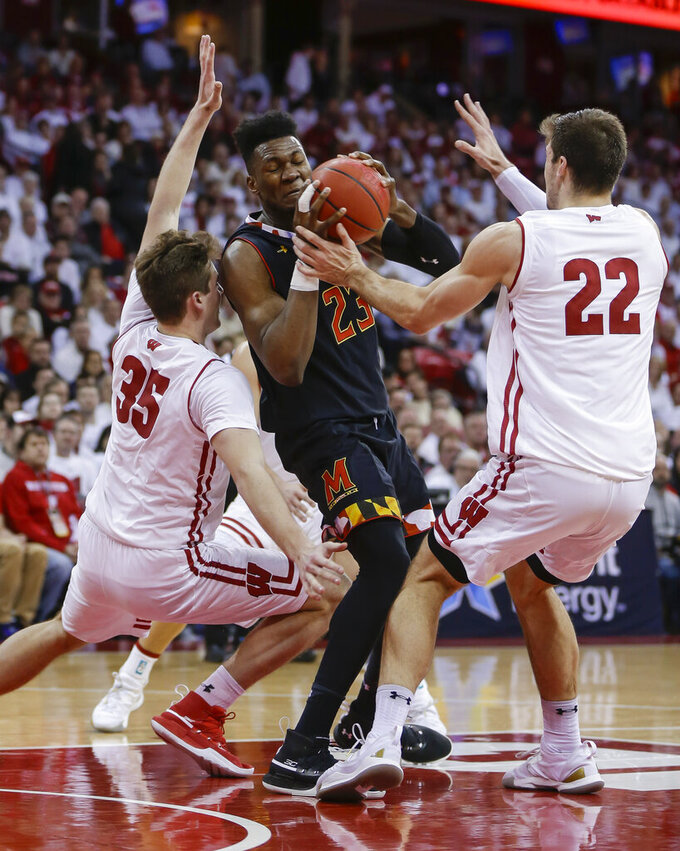 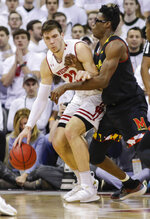 MADISON, Wis. (AP) — Wisconsin is used to getting production out of Ethan Happ and Brad Davison.

Lately, role players such as Aleem Ford have been coming up big, too.

Ford came off the bench to score 10 points after he was held scoreless in Wisconsin's three previous games. He went 0 for 7 on 3-pointers over that stretch but was 2 of 4 from beyond the arc Friday night.

Given his recent struggles, Ford looked over at Wisconsin coach Greg Gard after missing an early shot.

Outside shooting proved to be the deciding factor as Wisconsin (16-6, 8-3 Big Ten) pulled away in the second half after failing to capitalize while Maryland's best post players were in foul trouble.

Maryland (17-6, 8-4) was forced to go deep into its bench in the second half with Bruno Fernando and Jalen Smith whistled for their third fouls. Fernando came out after he was called for a charge less than three minutes into the period. Eight seconds later, Smith was whistled for a foul on a layup by Happ.

But Wisconsin couldn't take control with both Fernando and Smith on the bench for almost six minutes, and Smith's layup on his first possession back gave the Terrapins a 48-42 lead with less than 12 minutes to go.

Wisconsin, which leads the Big Ten in 3-point percentage, then knocked down six of its next eight from behind the arc to take control and pull away.

Ford said he never lost confidence during his dry spell, thanks in part to his teammates.

"They were always in my ear saying the next one will fall," he said.

Turgeon said he was forced to go to a zone with Fernando and Smith in foul trouble.

"I thought our defense was terrific at times," Turgeon said. "But when both of your big guys are in trouble and you've got an All-American in Happ, they're hard to guard."

Eric Ayala led Maryland with 18 points. Fernando finished with 13 points and 10 rebounds, while Smith scored five, less than half his 12-point average.

The Terps came in having taken 114 more free throws than their opponents on the season, while the Badgers had attempted 23 fewer than their opponents. But Wisconsin went 14 of 23 from the line, compared to Maryland's 3 of 8, and Turgeon clearly wasn't happy about it.

"Are you serious out there? Twenty-three to eight? My guys battled out there," Turgeon said.

Maryland was called for 18 fouls compared to 14 whistled on the Badgers.

Maryland: The Terps have lost three of four after a seven-game winning streak.

Wisconsin: Less than two weeks ago, Wisconsin trailed Maryland by as many as 21 in the second half before mounting a furious rally and falling 64-60. The Badgers have won five straight since then.

Maryland: Travels to Nebraska on Wednesday.

Wisconsin: At Minnesota on Wednesday.