ESPN's Vitale rings bell in celebration of being cancer free 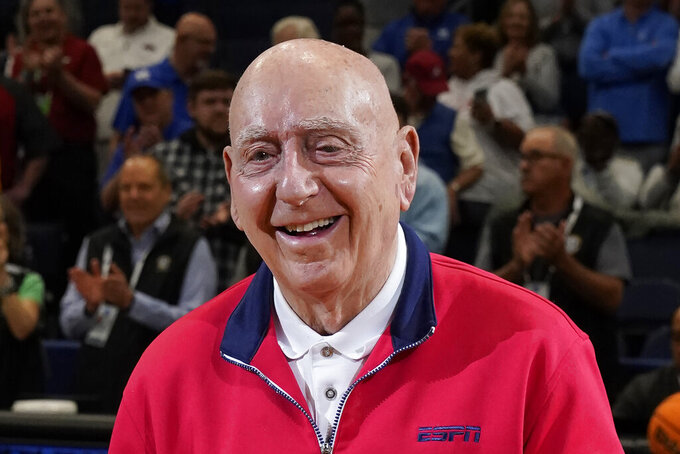 FILE - ESPN sportscaster Dick Vitale poses before an NCAA college basketball game between between Texas A&M and Arkansas at the Southeastern Conference tournament Saturday, March 12, 2022, in Tampa, Fla. Longtime college basketball broadcaster Dick Vitale is celebrating after finishing chemotherapy at Sarasota Memorial Hospital in Florida. He tweeted Thursday, April 14, 2022, that he was cancer-free, and posted a video of himself ringing the bell in excitement. (AP Photo/Chris O'Meara, File)

This time, Vitale wasn't calling a big dunk or a clutch play by another college basketball star. It was his own victory, his own Big Dance in April.

The famed college basketball figure, a former coach and longtime broadcaster for ESPN, is celebrating after finishing chemotherapy at Sarasota Memorial Hospital in Florida. He tweeted Thursday that he was cancer-free, and posted a video of himself ringing the bell in excitement.

Vitale, 82, said in the fall he had been diagnosed with lymphoma, months after multiple surgeries to remove melanoma. He has chronicled his treatments and recovery on social media, posting photos of doctor visits and hospital stays while issuing motivational tips recorded before he was put on voice rest.

Vitale has been with ESPN since 1979, the year the network launched. He called ESPN’s first college basketball broadcast.

For nearly as long as Vitale has been a part of college basketball, he has been fighting against cancer. He helped friend Jim Valvano to the stage at the ESPYs, where Valvano delivered his iconic “Don’t give up” speech.

A prominent fundraiser for children’s cancer research, Vitale is planning his 17th annual Dick Vitale Gala in early May in Sarasota. The event has raised more than $50 million for the V Foundation for Cancer Research.