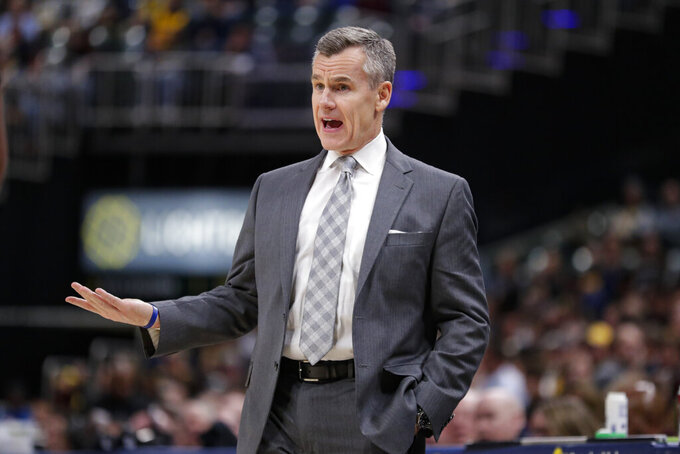 Oklahoma City Thunder coach Billy Donovan questions a call during the second half of the team's NBA basketball game against the Indiana Pacers in Indianapolis, Tuesday, Nov. 12, 2019. The Pacers won 111-85. (AP Photo/Michael Conroy)

The Gators are naming their basketball court after Donovan, who led them to back-to-back national championships, four Final Four appearances and six Southeastern Conference titles during his 19 years in Gainesville.

“Billy Donovan Court” will be formally introduced Feb. 15 during Florida's game against Vanderbilt. Donovan will be in attendance since it takes place during the NBA’s All-Star break.

“I was totally shocked,” Donovan said. “It was really emotional. I didn’t anticipate this. I’m thankful, I’m honored and just incredibly humbled by it all.”

Donovan made basketball matter at Florida, leading the Gators to a 467-185 record before leaving to take over the NBA's Oklahoma City Thunder in 2015.

“What Billy accomplished here no one ever could have anticipated,” Foley said. “There’s probably a whole generation that thinks Florida basketball has always been on the map. Is that true? The answer to that question is ‘no.’ Pockets of success, yes. But then he came in here and built a program that is recognized as a national brand."