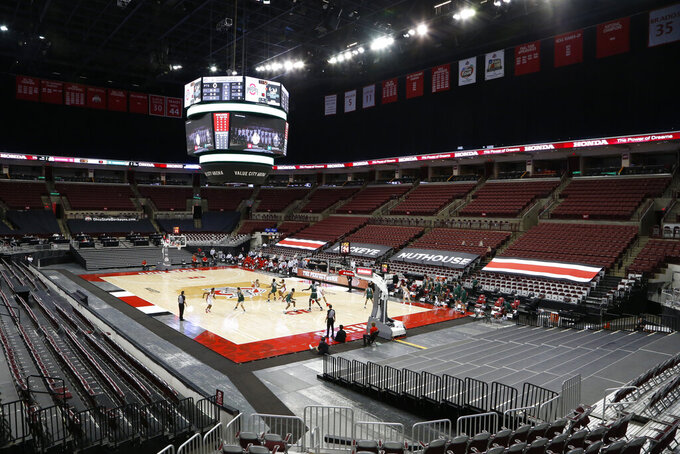 FILE- In this Sunday, Dec. 13, 2020, file photo, Cleveland State plays against Ohio State during the first half of an NCAA college basketball game with no fans in the stands at Value City Arena in Columbus, Ohio. This pandemic-altered season has turned into quite the isolation play. With campuses largely empty and arena doors closed to fans in many places, the games have more than ever been reduced to television programming. (AP Photo/Jay LaPrete, File) 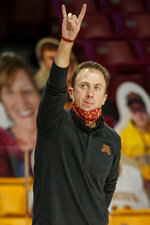 MINNEAPOLIS (AP) — Eric Curry texted his mom last week. He needed a headshot of her and his sister.

The photo request was not for a social media post or a scrapbook project, but rather an effort by the fifth-year senior forward to give his closest family members the chance, virtually, to be present for Minnesota's upcoming games.

When the Gophers host Iowa in an empty Williams Arena on Christmas night, the good tidings of great joy will have to come from those cardboard faces of parents, siblings and friends strategically placed in prime seats nearest the court.

“That made my heart smile,” said Curry's mother, Audrea Phipps. “I feel like every player needs to have cutouts of their families in those stands, and that’s for every team across the country. That would so help those kids, to be able to feel like we’re there with them."

College basketball teams are accustomed to being busy through the holidays, often absent for family gatherings on Thanksgiving in particular. This pandemic-altered season feels even more isolated with campuses largely cleared out and arena doors closed to fans in many places.

Christmas Day itself is usually reserved for college football and the NBA, but not this year: The Big Ten scheduled four games — Wisconsin at Michigan State, Maryland at Purdue, Michigan at Nebraska and Iowa at Minnesota — on Friday. They are the only college hoops games scheduled.

“We’re all not too excited about that. No knock against Nebraska, but Christmas Day, I don’t think anyone wants to travel away from their place,” said Michigan forward Isaiah Livers. “Although, still, you've got to think about it as being grateful and being blessed and having an opportunity to be on the court. Because the season could have not happened. I see what they were thinking. They were trying to schedule games."

Normally, family members would make an event of it and see their sons play in person, but state restrictions and conference protocols aimed at stopping the virus spread have prevented so many of these visits. Instead of traveling to Minnesota, Curry's mother, sister and grandmother will watch from their home in Little Rock, Arkansas.

“He knows I’m always watching, but it’s different when you’re there in person,” Phipps said. “They may be adult-like and have grown-men bodies and all that, but they’re still kids, honestly. Eric, today, if something goes wrong, he’s still going to call me because I need to fix it for him.”

Programs across the country have attempted to ramp up mental health support at a time when the potential for anxiety or loneliness has spiked for players along with everyone else. There is extra stress, too, each time they arrive for a COVID-19 test, realizing a positive result will force them out of action and away from their surrogate family.

“The emotional and mental fatigue and exhaustion and trauma, even though that may not be the appropriate word, it’s much more real than you imagine,” Texas A&M coach Buzz Williams said.

Duke coach Mike Krzyzewski was so concerned earlier this month that he canceled two nonconference games so team members could be home for Christmas.

“They want to go to a football game, and they want to hang out with the regular students. They have none of that,” Rutgers coach Steve Pikiell said. “So their normal has completely changed, except for when they get in the gym.”

Michigan State players, who ate their Thanksgiving meal while on a Zoom call with their families to keep spirits up on the holiday, had a recruiting room at the Breslin Center temporarily transformed into an arcade and lounge so they could hang out somewhere beside their apartments.

“Forty years ago, I don’t know if I could have done what they’re doing,” coach Tom Izzo said.

Minnesota coach Richard Pitino recently described the vibe akin to the team being on a 15-hour bus trip, only able to see each other.

“We at least get to go home to our families, but these guys are very, very isolated, and it is a huge challenge from a mental health standpoint,” Pitino said. “You can't take them bowling. You can’t take them to a movie theater. So you’ve got to be as empathetic as possible.”

“As you get older, you realize how to get release from stress in life, whether it’s go for a walk, work out and exercise, a glass of wine at night, read a book, whatever it is,” Pitino said. “I don’t know if young people quite know that, so we’re trying to educate them as much as we can.”

The bouncing balls and squeaking sneakers are as good of an antidote as there is. Wisconsin coach Greg Gard called playing games “a big mental health bonus” and facing a tough opponent helps bring focus.

The freshmen, like Gophers guard Jamal Mashburn Jr., have had the biggest adjustments.

“It’s definitely a struggle. I’m used to seeing my dad who’s my best friend, my hero. It’s hard being away from him," he said of the elder Mashburn, the former Kentucky and NBA standout. "He’s also my trainer. He’s my everything. So it’s hard, but I know he’s always going to be there. He calls me every day.”

Kids being kids, though, they're doing their best to live in the moment.

“I just know I’ve got to take care of business here. Home is always going to be there," Mashburn said. "That’s never going to go anywhere.”