For New Orleans, a 6th Final Four is bounce-back moment 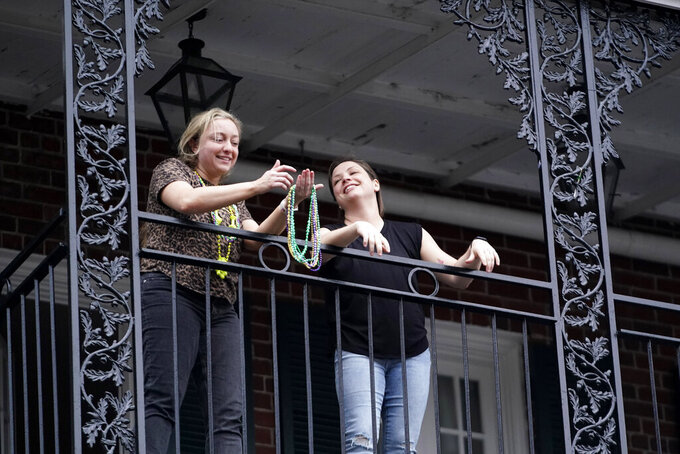 Women throw beads from a balcony to passers-by below on Bourbon Street in the French Quarter Wednesday, March 30, 2022., in New Orleans. Few things in the sports world resemble a return to pre-pandemic life more than an NCAA Final Four in sold-out Superdome -- and all that goes with it. Hotels and restaurants are heavily booked as a city famous for majors sports events, music festivals and cultural tourism gets the economic and reputational jolt it has needed after about two years of pandemic restrictions. (AP Photo/Gerald Herbert)

NEW ORLEANS (AP) — A seat at the 182-year-old French Quarter restaurant that invented Oysters Rockefeller and mastered Baked Alaska is virtually impossible to get this week as the first NCAA men's Final Four without pandemic restrictions in three years comes to this historic port city near the mouth of the Mississippi River.

It's a simultaneously joyous and frustrating time for Lisa Blount, whose family operates Antoine's — a restaurant which opened in 1840, only had French menus for most of its existence, and has a long tradition of hosting Mardi Gras “royalty.”

Because of challenges to finding and training staff since the pandemic, bookings have been limited to about half of the upwards of 600 per night there would normally be for an event this big — meaning half as many orders of Pompano Ponchartrain with crab meat or Filet Marchand de Vin.

“It's great to see people in town and this type of event that is so high-profile, but it’s frustrating because we still have issues with staffing,” Blount said. “I feel so bad. People are calling everywhere and can’t get a reservation for dinner.”

The country — and much of the world — is trying to put the fears and frustrations of COVID-19 in the rear mirror.

Few things in the sports world resemble a return to pre-pandemic life like a Final Four in a sold-out Superdome and all that goes with it.

This weekend, fans are flocking to New Orleans in no small part because of the teams involved. Duke, Kansas, North Carolina and Villanova all have storied basketball histories and huge fan followings. On top of that, Duke coach Mike Krzyzewski, among the most successful coaches of in the history of the sport, is retiring after this season, giving Saturday night's semifinals — and perhaps Monday night's final — added historical significance.

“There’s interest for people who aren’t necessarily Duke fans that want to come see this," said Jay Cicero, president of the Greater New Orleans Sports Foundation, which along with Tulane and the University of New Orleans makes up the Final Four host committee. “It’s a historic moment, it really is, and adds to the list of historic moments for New Orleans and the men’s Final Four.”

Past Final Fours in New Orleans have featured Michael Jordan's emergence with North Carolina in 1982; Keith Smart’s heroics for Bobby Knight-coached Indiana in 1987; Chris Webber’s infamous timeout call (when Michigan had none left) against North Carolina in 1993; Carmelo Anthony’s offensive dominance for Syracuse in 2003; and Anthony Davis’ unparalleled defensive display in 2012.

Now comes another highly anticipated edition of college basketball's marquee weekend in a city that is not only synonymous with Final Four memories of the last four decades, but whose economy is largely driven by a tourism industry devastated by the COVID-19 pandemic — starting with the cancellation of the 2020 NCAA Women's Final Four and the world-renowned Jazz and Heritage Festival after that.

Cicero said until recently, there remained considerable uncertainty surrounding local planning for this Final Four, particularly during the surge of the Omicron variant of the coronavirus between Thanksgiving and New Year's. Officials came up with a wristband system aimed at easing access for vaccinated fans to events. But that was happily scrapped and virtually all restrictions lifted after the Mardi Gras parade season passed in late February without a subsequent COVID surge in March.

That development was quite the departure from March of 2020, when "the disappointment, the shock, and unpredictability of the near future at that time had us all in a state of bewilderment,” Cicero said. “We hoped but couldn’t have anticipated that COVID numbers would have reduced dramatically enough to host the Final Four without any restrictions."

“This is a premier opportunity — one of the most important and well-known sporting events — for us to get back into the swing of things,” Leger said. “It’s hard to even measure how important that is."

Related events will include a Fan Fest at the city's convention center, and free concerts at a riverside park.

The events are walkable from New Orleans' more than 22,000 downtown hotel rooms — for those who could get one. Officials say bookings were so strong that many visitors have been referred to hotels and short-term rentals across the metro area.

New Orleans is hoping for similar turnouts for the first Jazz Fest in more than two years later this spring, followed by the return of major convention business.

If so, the next challenge will be filling jobs.

Hence the relative difficulty getting tables at the city's many renowned restaurants.

But Leger sees a silver lining in that visitors will be motivated to venture out to more neighborhood joints locals love, but which tend to get less tourist traffic.

Chef Susan Spicer — who launched popular French Quarter restaurant Bayona and helped fellow James Beard Award-winning Chef Donald Link open Herbsaint downtown — now spends most of her time at a low-key restaurant called Rosedale. It's hidden on a bumpy side street in the Lakeview neighborhood, named for its proximity to Lake Pontchartrain.

Spicer said a lot of area chefs are hustling “on the line” in the kitchen, more so than they would in pre-pandemic times, because of the relative lack of staffing, combined with upticks in business. But they're not complaining.

“We need the business so it’s still exciting,” Spicer said. “We want to feed people. We like hearing the restaurants be loud.”

And Spicer appreciates the synergy of sports and the hospitality industry from her many years participating in the Taste of the NFL events held during Super Bowl weekends.

“Those sports guys love to come and spend money; they’re pretty high rollers," Spicer said. "They’ll drop some much-needed cash in the city and that’s awesome. It doesn’t really matter where it goes.”