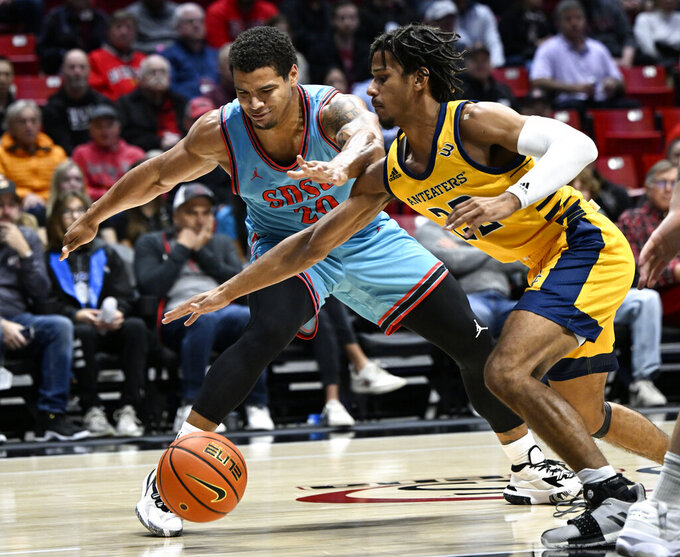 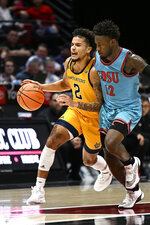 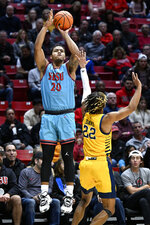 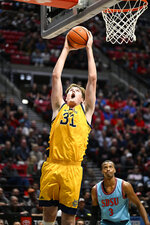 SAN DIEGO (AP) — Micah Parrish hit a 3-pointer from the left corner with 2.4 seconds left to give host No. 24 San Diego State a come-from-behind 72-69 win over UC Irvine on Tuesday night.

“I knew it was good,” Parrish said of his winning shot. “As soon as it left my hand, I looked away. I looked back and I saw it was in.”

Nathan Mensah scored 18 points to lead the Aztecs (5-2), who came into the game looking to rebound after consecutive defeats to Arizona and Arkansas at the Maui Invitational last week.

“Players are just tired from the flight. It is a long trip,” Mensah said of the journey back from Hawaii and having to face a tough Anteaters squad. “It was not just a hangover from Maui but also we played good competition in UC Irvine.”

DJ Davis scored 28 points to lead the Anteaters (6-2), who had a three-game winning streak snapped.

“UC Irvine's guards are dynamic,” San Diego State coach Brian Dutcher said. “You go out there to take away the three away, you can't give him (Davis) the three.”

Davis was 4-for-6 on threes despite the attempt by the Aztecs defense to limit his perimeter shots.

“He shot so far away I couldn't believe it,” Dutcher said of Davis. “So you are going to give him angles. You are guarding him 30 feet from the hoop and he is going to get by you.”

It was a tight game throughout, especially in the second half when the lead see-sawed between the teams. San Diego State maintained a small advantage throughout the first half and lead 32-30 at the break.

“The first game after Hawaii is always tough. I have been around long enough to know that. It's super tough when you schedule a team that is 6-1 and playing really good basketball," Dutcher said. “We made a lot of mistakes in the first half. Offensively too careless with the ball."

With five minutes to play in the first half, referee Larry Spaulding suffered an apparent leg injury and left the game, leaving just two officials to cover the floor for the remainder of the game. There was no update provided post-game on Spaulding's injury.

“We attacked hard and got to the foul line a lot. Maybe if we had a third official out there we would have shot 100 free throws,” Dutcher said. “I feel bad for Mr. Spaulding. That was a tough injury so I am wishing him well.”

Matt Bradley had 14 points for the Aztecs and had the crucial assist to Parrish for the game-winner.

“Matt is one of the best passers on the team. I know last year he led the team in assists and he doesn't get enough credit for that," Parrish said. “He is a brilliant passer when he doesn't have a shot.”

San Diego State shot 6-for-21 for three-point shooting but hit several huge threes in the final minutes, which clinched the win.

“The most gratifying thing is to see that we got down four late and we didn't fold up,” Dutcher said. “We got stops and we made big baskets. We struggled from three, but with the game on the line we made three in a row I think at the end.”

UC Irvine: Coming into the game, UC Irvine was ranked 15th nationally in bench points with a 35-point average. The Anteaters only had 16 against the Aztecs.

SAN DIEGO STATE: The win over UC Irvine was the 33rd consecutive victory by the Aztecs over a Big West opponent.

UC Irvine: The Anteaters finish a challenging week by hosting Fresno State on Saturday evening and then go on the road for four of their next five games.

San Diego State: The Aztecs host small school Occidental College on Friday night. The Aztecs play at home for five of their next six games. The Aztecs are 38-4 in their last 42 home games.