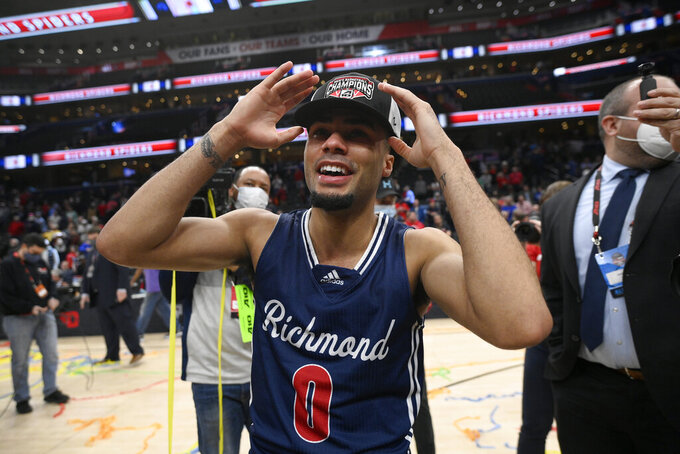 Richmond forward Grant Golden never envisioned such possibilities in March 2020 when the Spiders’ realistic hopes of making the NCAA Tournament abruptly ended because of the pandemic.

Golden was among the Spiders players riding the down escalator at a Brooklyn hotel on their way to practice upon learning the Atlantic 10 tournament had been canceled. And he was on the team bus to the airport soon after when news of the NCAA Tournament being canceled broke, rendering Richmond’s 24-7 season essentially moot.

Two years later, Golden and five other Richmond “Graduate Seniors” — two of them non-scholarship walk-ons — have finally made their way back.

“There are certainly a lot of times where we could have felt sorry for ourselves and sort of quit and said, `You know, maybe this just isn’t it,‘” Golden said. “But the fact that nobody did, and everybody stuck with it and decided to come back just made it all that much better.”

Seeded 12th in the Midwest Region, the Spiders (23-12) are coming off a four-wins-in-four-days-run to claim their second A-10 tournament title, and prepare to face Big Ten champion Iowa (26-9) in the first round on Thursday.

“For everybody, it’s incredible. But those guys who were in that hotel and experienced that pain of the tournament being canceled, it’s very special,” Richmond coach Chris Mooney said.

While numerous teams have players who took advantage of the NCAA granting an additional year of eligibility because of COVID-19, Richmond’s 20-member roster is among the tournament’s largest and most experienced. With Golden set to play his 160th career college game, the Spiders feature six players in either their fifth or sixth year, and three fourth-year seniors.

The depth of experience is credited as a reason behind the Spiders winning seven times when trailing by 10 or more points, including erasing 15-point second-half deficits in beating Rhode Island and Dayton in the A-10 tournament.

“So often if you see college games, you see teams start to get sluggish or start to throw up 3-point shots when something bad happens. I think we’re old enough not to do that,” Mooney said. “We’ve been in these situations before. These guys have been in so many games. ... We can draw upon a lot of that experience.”

Behind Richmond among NCAA Tournament teams, Delaware’s roster has what is believed to feature the second-most graduate seniors, with four.

“I have to give a lot of credit to this Richmond team. They brought all these guys back and decided they wanted to do something special this year,” said Iowa guard Jordan Bohannon, who has also returned for a sixth year. “I think every college athlete that had a chance to, I think they should have, especially after the year we had last year. It just didn’t ever feel like a real season with regards to playing every day and getting tested every day and going through the whole COVID pandemic.”

Bohannon’s return is a reason the Hawkeyes are making their third consecutive tournament appearance. Iowa is 12-2 since Bohannon made the switch to point guard.

“I wish I could come back for a sixth year,” joked Iowa coach Fran McCaffery.

“I think the important thing for (Bohannon) and I’m sure it’s the same thing for the Richmond guys is, `OK, if we’re coming back, we’re coming back for a reason,‘” he added. “And I think that’s what we saw, two teams that won the tournament championship and get to play in this tournament.”

For the Spiders, the motivation to return stemmed not only from what happened in 2020, but also from how COVID-19 contributed to their season unraveling last year. With numerous players, including Golden, spending lengthy stretches in protocol, Richmond’s NCAA hopes ended with a second-round A-10 tournament loss to Duquesne, and its season ended with a loss to Mississippi State in the second round of the NIT.

Fifth-year guard Jacob Gilyard remembers rolling his eyes in the fall of 2021, when Mooney informed his seniors they could return for an additional year.

“I think everybody was kind of like, `No, we’ve been here long enough,’” said Gilyard, who holds the NCAA record with 466 steals.

The mood gradually changed, however, as the season progressed with Gilyard saying each player eventually arrived at the same conclusion to return.

“I think at the end of the day, it was a personal decision for everybody, but I think for everybody, somebody played a role in everybody’s decision,” Gilyard said. “And once I decided to come back, I knew there wasn’t anywhere else I would rather be.”