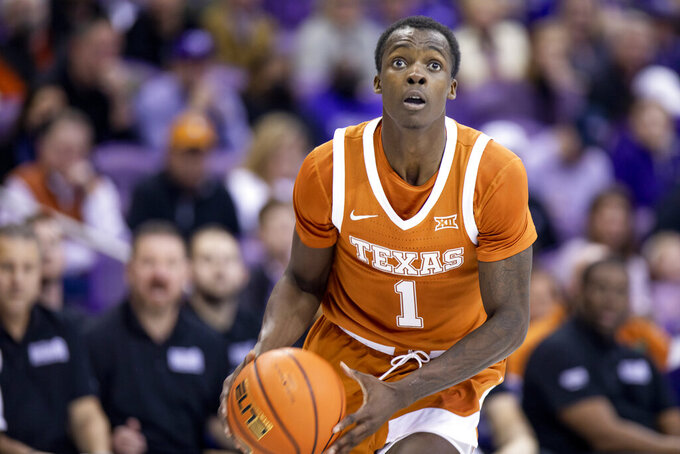 FILE - Texas guard Andrew Jones (1) looks to shoot in the second half of an NCAA college basketball game against TCU in Fort Worth, Texas, Jan. 25, 2022. Jones, whose college basketball career was interrupted for nearly two years by leukemia, has announced he will skip a final season with the Longhorns and turn pro. (AP Photo/Gareth Patterson, File)

AUSTIN, Texas (AP) — Texas shooting guard Andrew Jones, whose college basketball career was interrupted for nearly two years by leukemia, has announced he will skip a final season with the Longhorns and turn pro.

Jones ranks ninth in scoring in program history with 1,620 points. He announced his decision to enter the NBA draft in a statement posted Sunday night on social media.

“We have shared every emotion possible together and I will always cherish the experience I had with you all,” Jones said. “As I officially enter my name into the 2022 NBA draft, I am excited and most importantly ready for this next chapter of life.”

Jones considered turning pro after his freshman season but opted to return to Texas for the 2017-2018 season. But just a few games into his sophomore season, Jones was sidelined with leukemia that left him fighting for his life.

He posted several short videos of himself as he fought through treatment and recovery, including one showing him standing still and trying to shoot a basketball into a hoop barely taller than he was.

He finally returned to the court full-time in the 2019-2020 season, when he averaged 11.5 points and was named the Big 12's Male Sportsperson of the Year.