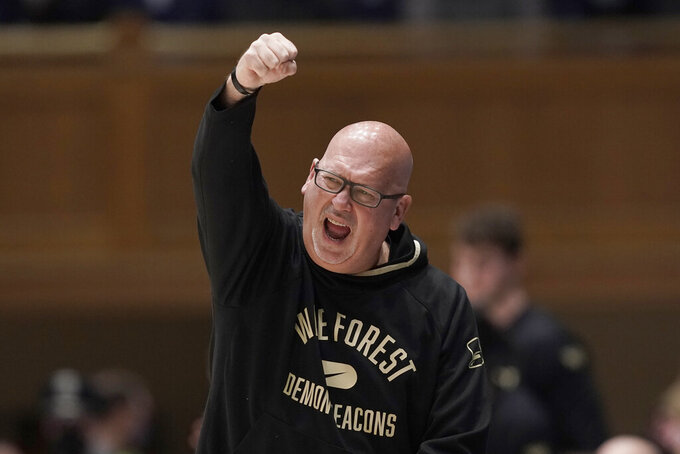 FILE - Wake Forest head coach Steve Forbes reacts during the first half of an NCAA college basketball game against Duke in Durham, N.C., Tuesday, Feb. 15, 2022. Wake Forest says second-year coach Steve Forbes has signed what it calls a “long-term” contract extension as he has led a rapid rise for the long-struggling Demon Deacons program. The school announced the deal Monday, March 7, 2022, the same day the Atlantic Coast Conference announced Forbes was its choice as league coach of the year. (AP Photo/Gerry Broome, File)

The school announced the deal Monday, the same day the Atlantic Coast Conference picked Forbes as coach of the year. The private university didn't release terms of the extension.

Forbes said the negotiations were stress-free.

“I didn't have to go to them,” Forbes said in a video teleconference with reporters. "They came to me. ... I never lost one ounce of sleep about it. I knew (athletics director John Currie) and my agent would get it done. And they did.

Forbes was the only hire made by a power-conference men's basketball program as the COVID-19 pandemic shut down the sports world in spring 2020, then labored through a pandemic-altered first season with six wins.

This year's Demon Deacons were picked to finish 13th in the 15-team ACC. Instead, Wake Forest (23-8) has its highest win total since the 2008-09 season and holds the No. 5 seed for this week's ACC Tournament in New York, where it opens play in Wednesday's second round against the Boston College-Pittsburgh winner.

The Demon Deacons could also reach the NCAA Tournament for only the second time since 2010.

Forbes hit it big on the transfer market to enable him to restructure this year's roster. Headlining the new additions is Oklahoma transfer Alondes Williams, who was the league's No. 2 scorer (19.3) and assists leader (5.3) en route to being named ACC player of the year. The Demon Deacons also added Indiana State forward Jake LaRavia, picked as a second-team all-ACC performer.

“Him being on us everyday in practice and seeing how much he cares about this game ... it was just great seeing him win that (award) and seeing what he's been putting into this program to turn it around," Williams said.

The extension marks the second time in recent months that Currie has sought to secure one of his headlining coaches who could be an attractive candidate for other jobs.

The school in November announced it had signed football coach Dave Clawson to an extension as he led the Demon Deacons to a top-10 national ranking in the ACC championship game.

“They put the ball in my court," Forbes said. "This is where I want to be, I never said anything different. ... I will say this: if your name is being mentioned for stuff like that, it's a good thing because it means you're winning. They ain't going to put your name in there if you're losing.”