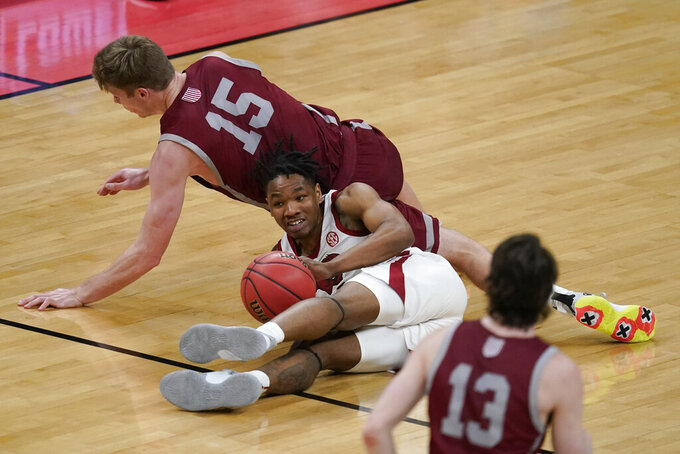 Arkansas' JD Notae (1) and Colgate's Tucker Richardson (15) battle for a loose ball during the first half of a first round game at Bankers Life Fieldhouse in the NCAA men's college basketball tournament, Friday, March 19, 2021, in Indianapolis. (AP Photo/Darron Cummings)

INDIANAPOLIS (AP) — The night before his team's NCAA Tournament opener, Arkansas coach Eric Musselman sat in a hotel room and talked with his son about using full-court pressure against Colgate.

The Razorbacks didn't use their “55” defense until after they'd fallen into a 14-point hole, but once they did, the Raiders had no answer.

Justin Smith had 29 points and 13 rebounds, and Arkansas shut down high-scoring Colgate to open the NCAA Tournament with an 85-68 win on Friday.

“We knew we were going to unleash it,” Musselman said. “I didn't know if it was going to be in the second half or in the first half, when it might be. We talked about playing Justin at the 5 — we didn't say much to the team about it — and thought it could really speed things up.”

The 14th-seeded Raiders (14-2) had upset pickers out of their seats early in the South Region opener with a slew of 3-pointers and a 16-2 run to go up 14. The third-seeded Razorbacks (23-6) restored some bracket order with a 19-0 run spanning halftime and scored 10 straight points late to pull away.

Arkansas' defense was the difference.

In danger of becoming the bracket's first big upset victim, the Razorbacks switched from man defense (5) to full-court man (55) to swarm Colgate.

The Razorbacks, at times, snatched the ball right out of the Raiders' hands to set up shots in transition, scoring 34 points off Colgate's 22 turnovers. Arkansas forced five turnovers during the decisive run, holding Colgate without a field goal for more than six minutes to turn a close game into a 13-point lead.

“The intensity of their on-ball defense is really something that we’re not used to,” Colgate coach Matt Langel said. “They were trying to not let us run offense.”

Musselman has led a quick turnaround in Fayetteville with the same freewheeling offensive style he had success with during four years at Nevada.

The Razorbacks were on the cusp of an NCAA Tournament berth before last season was shelved by the pandemic and this year have their highest seed since reaching the 1995 national title game.

They may not be Nolan Richardson’s “40 Minutes of Hell,” but they play fast and score a lot — 82.4 points per game, seventh nationally.

Arkansas seemed to have met its revved-up match against Colgate, the small liberal arts school from central New York.

Coach Matt Langel has transformed the Raiders into one of the Patriot League's best teams by adding a dash of octane. Colgate reached the NCAA Tournament in 2019 by picking up the scoring pace and are back again this year after scoring 86.3 points per game, second nationally.

After a slow start in Indianapolis, the Raiders gave Arkansas a quick lesson in offensive efficiency, going on their big run to go up 33-19 and set off the upset alert.

“We may have been tight, but we were also trying to figure out what they were doing,” Smith said. “They play a way we really haven't played all year and we were just figuring it out. We can't get behind like that, especially in this tournament”

Before brackets could be torn up, the Razorbacks started racin', using their defensive pressure to set up a closing 17-0 run, the final two a layup at the buzzer by Davonte Davis to put Arkansas up 36-33 at the half.

Colgate looked as if it was on its way to pull off the bracket's first major upset with the early run. Arkansas' athleticism, particularly on defense, turned out to be too much for the Raiders to overcome.

Arkansas is know for its offense, but the Razorbacks proved they can play a little D, too.

Arkansas moves on to face Texas Tech on Sunday.