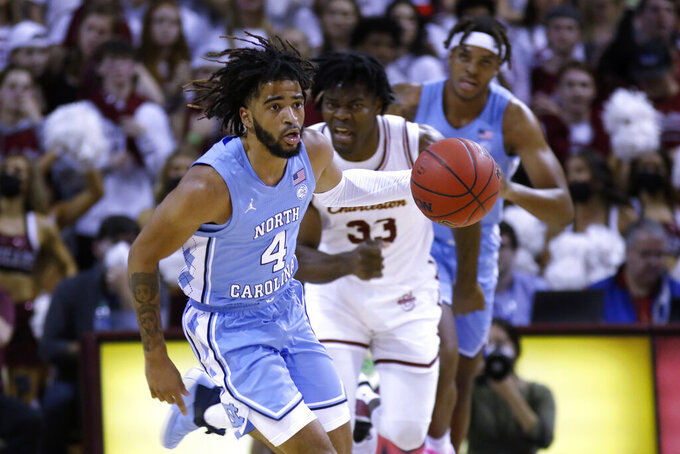 North Carolina's RJ Davis (4) brings the ball up as College of Charleston's Osinachi Smart (33) trails during the first half of an NCAA college basketball game Tuesday, Nov. 16, 2021, in Charleston, S.C. (AP Photo/Mic Smith) 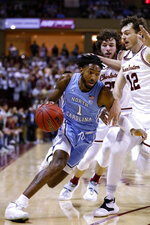 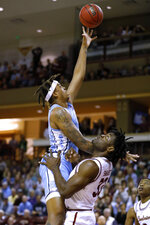 CHARLESTON, S.C. (AP) — First-year coach Hubert Davis thinks his North Carolina program took a huge step forward at Charleston. Not that he hadn't cursed his decision to play the resourceful Cougars along the way.

Armando Bacot scored a career-high 24 points, tied his career best with six blocks and added 12 rebounds as 18th-ranked Tar Heels rallied in the second half to beat Charleston 94-83 on Tuesday night.

Davis stomped his feet and grimaced much of the opening half as his team made mistake after mistake to trail Charleston 42-36 at halftime. In the last 20 minutes, the Tar Heels relied on their strength, speed and power underneath to improve to 3-0 for an eighth straight season.

“I love it now that we won,” Davis said.

It sure helped to have Bacot, his 6-foot-10 junior who had 16 points in the opening half. “He kept us in it,” Davis said.

Caleb Love picked things up after the break, scoring 18 of his 22 points in the second half as North Carolina took control.

Charleston closed within 72-71 on Reyne Smith's two foul shots with 6:12 left. But Kerwin Walton followed with a 3-pointer and Love made a jumper to extend the lead.

“This is a game that builds character,” Bacot said.

“You need a road map to get around him,” Kelsey said.

Smith led the Cougars with 19 points off five 3-pointers.

Charleston, in front a nearly full house of 5,100, made things difficult on the Tar Heels.

The Cougars hadn't hosted a Top 25 opponent since North Carolina visited in 2010 while ranked ninth. The Tar Heels and coach Roy Williams left with an 82-79 overtime loss.

Williams, who retired this year, was in the stands this time next to the Charleston coach who beat him that time — Bobby Cremins, who also coached at Georgia Tech.

What they saw must have given them flashbacks to 11 years ago as Charleston got off to a hot start and forced the Tar Heels to battle back.

The Tar Heels closed within 30-27 on Bacot's inside basket with 5:05 to play. But Charleston added the final two of its seven first-half 3s to stretch its lead to 42-36 at the break.

North Carolina tightened up its play the final 20 minutes. The Tar Heels, who came in averaging fewer than 10 turnovers per game, committed 11 in the first half but cut that to five in the second.

Reserve Brady Manek scored 17 points for UNC and Kerwin Walton had 14, also off the bench.

North Carolina: The Tar Heels were tested on the road. They'll need to avoid similarly slow starts as they face three ranked opponents in their next four games — No. 6 Purdue, either No. 17 Tennessee or No. 5 Villanova, and No. 4 Michigan.

Charleston: The Cougars didn't have the size to match up with Bacot or the speed to catch up with guards RJ Davis and Love in second half. It was Charleston's 11th straight loss to a ranked opponent since defeating No. 21 Baylor 63-59 in 2012.

Hubert Davis said he came in unsure how his team would handle a loud, rowdy road crowd, something that it hadn't seen in nearly two years after last season's pandemic restrictions on attendance.

“It was good to see them respond in a packed house,” he said.

Kelsey, who led Winthrop to the NCAA Tournament last season, has seen enough positives to think the Cougars can factor into the Colonial Athletic Conference race. Charleston last made the NCAAs as the CAA champion in 2018.

“The last four games have shown we have a chance to be a really good team,” Kelsey said.

North Carolina plays at No. 6 Purdue on Saturday.