Baylor is No. 1 seed in East as it opens title defense 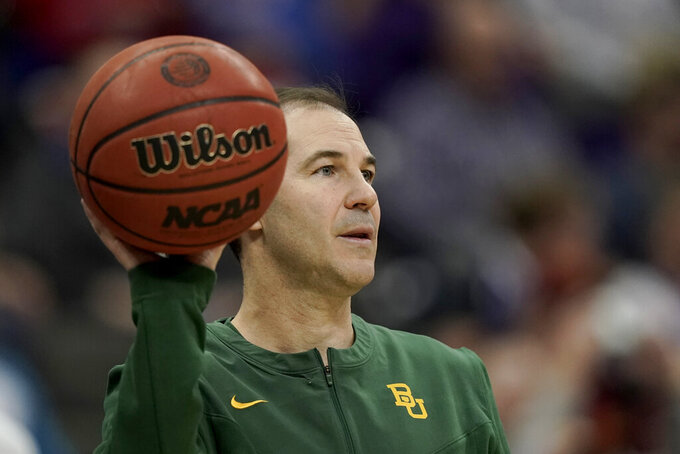 Baylor head coach Scott Drew catches a ball during the second half of an NCAA college basketball game against Oklahoma in the quarterfinal round of the Big 12 Conference tournament in Kansas City, Mo., Thursday, March 10, 2022. (AP Photo/Charlie Riedel)

Baylor shook off an early loss in last season’s Big 12 Tournament to race to a national championship.

The Bears can only hope they can do it again.

Baylor’s repeat bid for a national title starts in the East Region against Norfolk State. The Bears are the top seed in the East and open the tournament Thursday close to home in Fort Worth, Texas.

The Bears (26-6) are a No. 1 seed for the second straight season and only the second time in program history. Their potential path out of the region -- which plays Sweet 16 and Elite Eight games in Philadelphia -- includes No. 8 North Carolina, No. 4 UCLA and No. 2 Kentucky.

Baylor won five straight games before it was upset by Oklahoma in the Big 12 tourney quarterfinals.

Second-seeded Kentucky is back in the tournament for the first time since 2019.

The Wildcats were 9-16 last season but coach John Calipari got a quick turnaround going and they put the smack down this season on tournament teams Tennessee (28-point win), Kansas (18 points) and North Carolina (29 points).

The Wildcats play No. 15 seed St. Peter’s in the first round.

North Carolina is in the bracket as the eighth seed and plays Marquette. The Tar Heels won 12 of their final 15 games, with the biggest a win over Duke in coach Mike Krzyzewski’s final home game at Cameron Indoor Stadium. UNC lost in the first round last season.

Purdue failed to win the Big Ten title on Sunday but the Boilermakers earned a stout No. 3 seed in the East. The Boilermakers play Yale and here’s one reason to think Purdue could be a contender: It’s back to playing nonconference teams. All seven of Purdue’s losses came in conference play. Purdue earned it’s first No. 1 ranking in The AP Top 25 poll in December.

Jaden Ivey is a likely lottery pick and Matt Painter is regarded as one of the best coaches in the country. But Purdue was upset last season as the No. 4 seed and the Boilermakers have never made a Final Four under Painter.

“You get kind of to the end and it’s a little bit different, but I think really what we learn is just you’ve got to lay it on the line. You get yourself in close games, especially on a neutral court, like anything can happen, but you’ve got to play better,” Painter said Sunday. “You’ve got to be more efficient, you’ve got to be able to defend.”

Indiana is back in the NCAA Tournament for the first time since 2016.

The Hoosiers will play Wyoming on Tuesday in the First Four in Dayton, Ohio. If the Hoosiers win, they will play fifth-seeded Saint Mary’s in the East.

Indiana beat top-seeded Illinois, the regular-season co-champ, to reach the Big Ten Tournament semis and they beat eighth-seeded Michigan in the quarters. And they lost to No. 24 Iowa on Saturday when Jordan Bohannon banked in a tie-breaking 3-pointer from about 35 feet away with 0.8 seconds left and as the shot clock was about to expire. Iowa won 80-77

When in doubt, go with No. 1. Baylor faces a long haul to win another championship -- no team has won back-to-back titles since Florida in 2005–06, and 2006–07 under Billy Donovan. But playing close to home early should help the Bears, and they could roll that early success all the way to New Orleans.

“Really excited about Fort Worth. The guys worked really hard to make that happen, getting a No. 1 seed two years in a row,” Drew said of having to travel only about 90 miles from the Waco campus. "The perks of that are playing in Fort Worth.”