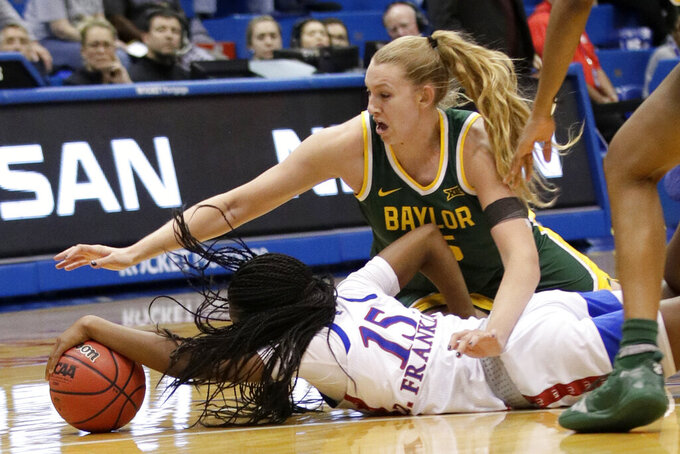 The Big 12 continues conference play with second-ranked Baylor trying to protect a perfect conference record when the Bears (14-1, 4-0) head to Oklahoma State on Saturday. Here's what else is going on in the league:

While the Cowboys try to spring the upset — which is certainly possible after another topsy-turvy week in college hoops — the biggest game on the docket will happen a couple hours later in Austin, Texas. Sixth-ranked Kansas (13-3, 3-1) is trying to keep pace with Baylor after losing to coach Scott Drew's crew at Allen Fieldhouse, while the Longhorns (12-4, 2-2) are coming off wins over Kansas State and Oklahoma State and can earn a major win for embattled coach Shaka Smart.

No. 23 Texas Tech (11-5, 2-2) bounced back from consecutive losses to Baylor and West Virginia by handling Kansas State earlier this week. The Red Raiders will try to keep that momentum going Saturday against Iowa State. ... An intriguing doubleheader awaits Monday when Texas heads to No. 12 West Virginia (14-2, 3-1) and Oklahoma (11-5, 2-2) heads to Baylor. ... Kansas State (7-9, 0-4) has struggled during a rebuilding season after trying for the conference championship a year ago, but the Wildcats can make much of that pain go away with a win over Kansas in Allen Fieldhouse on Tuesday night.

The Big 12 has three of the nation’s top 10 teams in the NET ratings, which are used to help determine the NCAA Tournament field. Baylor is No. 1 and Kansas is No. 2 with West Virginia at No. 8. ... The Bears are allowing 57.9 points per game, sixth in the country, a big reason why the Big 12 is holding opponents to a nation-low 62.9 per game. ... Kansas C Udoka Azubuike continues to lead the nation in field-goal percentage at 77.6. His career mark is 75.2. ... Texas was 15 of 32 from beyond the arc during its win over Oklahoma State last week. ... Texas Tech's Kyler Edwards scored a career-best 24 points to lead four Red Raiders in double-figures scoring in their win over Kansas State.

The Bears' Jared Butler was chosen the Oscar Robertson national player of the week by the NABC after leading his team to wins over the Jayhawks and Red Raiders. Butler had just five points in the defensive-minded 57-52 win in Lubbock, but he bounced back to score 22 in Allen Fieldhouse. He wasn't finished, either, scoring 19 points to lead the Bears to a 68-55 win over Iowa State on Wednesday night. Butler is now averaging 16.9 points while shooting 44% from the field.

Second-ranked Baylor (14-1, 3-0) had an easy win over Kansas to prepare for a showdown Saturday with No. 17 West Virginia (13-2, 3-1). The Mountaineers will try to bounce back from a lopsided loss to Oklahoma last week. ... The Sooners' Taylor Robertson hit eight 3-pointers and scored a career-high 31 points in their win in Morgantown. ... The Lady Bears are in the midst of their toughest stretch of the season. They follow their game against West Virginia with a trip to TCU and a home date with Texas Tech. ... Baylor forward NaLyssa Smith followed her big game against then-No. 1 UConn by posting a career-high 30 points and 15 rebounds in a win over Oklahoma State.