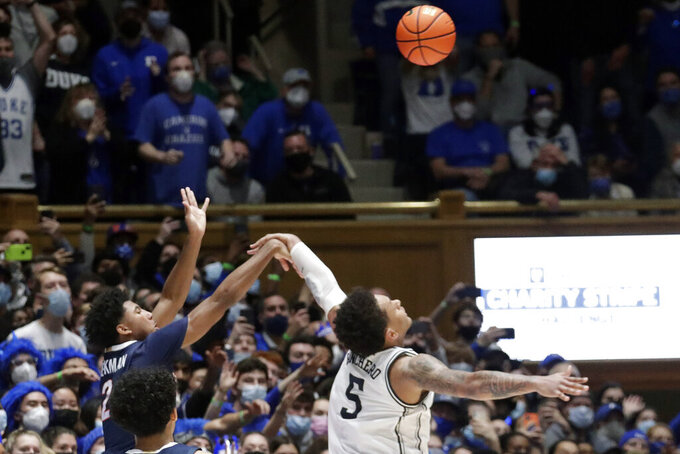 Virginia guard Reece Beekman (2) shoots a 3-point shot with under three seconds against Duke forward Paolo Banchero (5) for the go-ahead and eventual winning points during the second half of an NCAA college basketball game, Monday, Feb. 7, 2022, in Durham, N.C. (AP Photo/Chris Seward)

DURHAM, N.C. (AP) — Reece Beekman has a knack for connecting on big shots and he did it again Monday night on another big stage for Virginia.

“Another big shot, and I hit it,” Beekman said.

Beekman’s 3 over Duke’s Paolo Banchero was just the second made 3-pointer on 12 attempts for the Cavaliers. And five of Beekman's seven points came in the last two minutes.

“We don’t have a nickname for Reece,” teammate Jayden Gardner said. “He just shows up and performs.”

Beekman also drained a 3 at the buzzer to beat Syracuse in the 2021 Atlantic Coast Conference Tournament — the final game the Cavaliers won last season, meaning he's connected on winning 3s in two of the team’s last 16 wins dating to last season.

Gardner scored 17 points, redshirt sophomore Kadin Shedrick posted a career-high 16 points — many coming on a variety of dunks — and Armaan Franklin had 11 points. Virginia (15-9, 9-5 ACC) has won three games in a row.

Foul-plagued Mark Williams scored 16 points and Trevor Keels got all 12 of his points in the second half for Duke (19-4, 9-3), which had a five-game winning streak snapped.

Banchero was held to a season-low nine points and his desperation 3 hit only the side of the backboard to end the game.

“You don’t come to Duke to not play tough games,” Williams said. “We weren’t able to close it out.”

Before the last sequence, Beekman made a backcourt steal and basket to knot the score but failed to complete the three-point play. Then Keels put Duke back on top with two free throws with 1:26 left.

Virginia’s Kihei Clark had a look at an open 3, but it bounced off with about a minute left. Another Duke turnover came before Gardner missed.

Duke coach Mike Krzyzewski said there was a defensive breakdown off the inbounds pass, with Clark delivering his game-high ninth assist.

“The end of the game, that wasn’t complicated,” Krzyzewski said.

Beekman said there was no reason for alarm when Virginia’s perimeter shots weren’t falling. The Cavaliers held a 52-28 advantage in points in the paint.

“I feel like we took good shots, some just didn’t go in,” Beekman said. “We had a lot of plays going to the rim.”

Duke didn’t lead in the second half until Jeremy Roach’s drive for a basket at the 4-minute mark. Keels then put back his own miss to make it 66-63.

“We kept responding,” Gardner said. “Credit this group for never backing down.”

Virginia led 34-29 at halftime, aided by a 15-3 stretch that began around the midway mark of the half.

A pair of 3-pointers from reserve Bates Jones helped the Blue Devils stay in range after the Cavaliers built a 32-20 edge. Still, Duke was stuck with its largest halftime deficit of the season.

Virginia: The Cavaliers are 48-39 against ranked opponents in coach Tony Bennett’s 13 seasons. Virginia had made at least three 3-pointers in every previous game this season.

Duke: The Blue Devils had sloppy execution at times during their only home game during a six-game stretch. Krzyzewski said he was concerned about the energy level following a 20-point win two nights earlier at rival North Carolina.

Banchero, a freshman forward, was bottled up by Virginia's double- and triple-teams. He had averaged a double-double during Duke’s latest winning streak.

But with the Blue Devils, who entered the game averaging an ACC-best 80.7 points per game, struggling to find offensive flow, he failed to score in the second half — with just one shot attempted after halftime.

“He’s touching the ball,” Krzyzewski said. “(We need him) to take more shots.”

Classmate A.J. Griffin scored a season-high 27 points at North Carolina over the weekend, but he was 1 for 7 from the field for two points.

The Blue Devils are bound to pay for this result, with two of their four defeats coming on their home court against unranked opponents. But Duke will have two more chances this week to rebuild its résumé with road games.

Duke: At Clemson on Thursday to make up a postponed game.