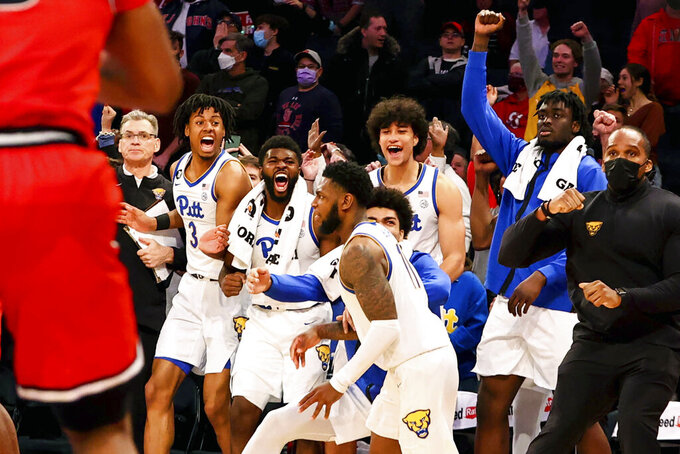 Pittsburgh's Jamarius Burton passes in front of players on the bench as they celebrate beating St. John's in an NCAA college basketball game, Saturday, Dec. 18, 2021, in New York. Pittsburgh beat St. John's 59-57 on Burton's shot with 0.4 seconds on the clock. (AP Photo/Jessie Alcheh)

After St. John’s (8-3) had tied the game on two Dylan Addae-Wusu free throws, Burton took the inbounds pass and stormed down the court before lifting the game-winning shot from the left side.

“I came down with pace and I saw the ball screen,” Burton said. “I just found a spot. I looked at the shot clock and I found a spot that I liked. And I just raised and elevated.”

“This was a big time win for us,” Pitt coach Jeff Capel said. “We're really proud of our guys for fighting.”

Despite having three players finish in double-figure scoring, St. John’s had its three-game winning streak snapped. Addae-Wusu led the Red Storm with 12. Posh Alexander added 11, and Joel Soriano had 10 points.

St. John’s played without that star swingman Julian Champagnie, who was out after testing positive for COVID-19.

“It's a tough, tough game for us,” St. John's coach Mike Anderson said. “It comes down to making plays at the end.”

What transpired on the Madison Square Garden court in the matinee was an ode to Big East Conference basketball. Which was fitting since St. John’s was among the conference’s founding members and Pitt was a member from the 1992-93 season through 2012-13.

Nothing came easy for either the Red Storm or the Panthers. Seemingly every shot was contested, and seemingly every body dove onto the court to retrieve loose balls.

Pitt took its first lead since early in the first half on Burton’s left corner 3 with 11:55 left in the second. The 45-44 lead lasted for all of 17 seconds as Soriano responded with a jump hook to allow St. John’s to regain the advantage.

After Alexander knocked down a pull-up jumper with nine minutes left in the second half, the teams combined to not score nearly 3 1/2 minutes. The drought ended with a John Hugley jump hook which let Pittsburgh close the gap to two, 50-48.

“Just not making the plays,” said Anderson, when asked why St. John's was not able to extend leads. “That's all.”

Alexander had an opportunity to give St. John’s the lead, but Hugley blocked his jumper. The Panthers extended the lead to three on a Jeffress free throw, but Addae-Wusu's two made free throws set the stage for Burton's game-winner.

“I work on the mid-range shots a lot,” Burton said. “I had that confidence going into (the play).”

With the win, Pittsburgh improved to 25-35 in 60 meetings between the programs. Pitt has won four straight meetings, the last occurring on Feb. 24, 2013.

Pitt: What is the last thing an offensively challenged team needs? For its leading scorer — Hugley — to be held to seven points. The sophomore entered the game averaging 15.9 points and had scored in double figures in Pitt’s five previous games, and eight times overall this season.

St. John’s: About 45 minutes prior to the game, it was announced Champagnie would not play. The school said Champagnie had entered protocols. Champagne is averaging 20.3 points and 6.7 rebounds per game. “We just found out a few days ago," said Anderson, who later added he had spoken to Champagnie. “He's okay," Anderson said. “It's just talking with him, making sure we keep his spirits up. ”

The Gotham Classic was supposed to be a doubleheader, with No. 16 Seton Hall meeting Iona in the second game. But due to a COVID-19 outbreak within the Seton Hall program, the school announced Thursday the game was canceled. The Big East announced Friday that Seton Hall’s upcoming conference opener on Monday against St. John’s was canceled. Due to the conference’s policy, since the Pirates would not have had enough players for the game, Seton Hall was assessed a forfeit, and St. John’s was credited with a win.