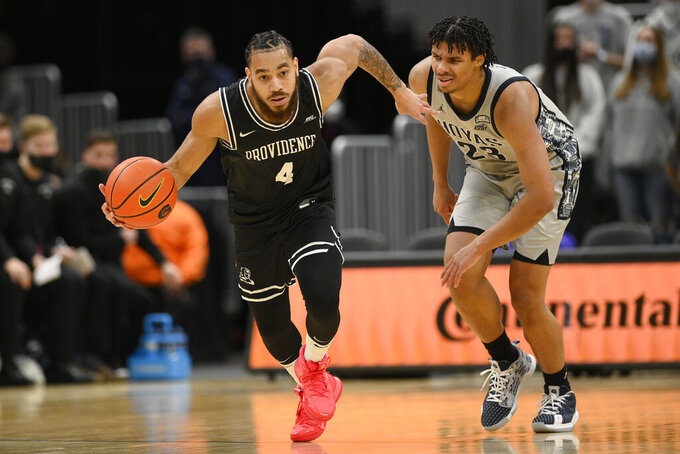 Providence guard Jared Bynum (4) steals the ball away from Georgetown forward Collin Holloway (23) during the first half of an NCAA college basketball game, Sunday, Feb. 6, 2022, in Washington. (AP Photo/Nick Wass)

WASHINGTON (AP) — Jared Bynum scored a career-high 32 points and No. 15 Providence won its seventh in a row, beating Georgetown 71-52 Sunday and sending the Hoyas to their school-record 11th straight loss.

The Friars (20-2, 10-1 Big East) completed a season sweep of the sputtering Hoyas and have won 12 of 15 against their longtime conference rival since 2015.

Bynum had only five points at halftime, but personally outscored Georgetown 27-22 in the second half.

“Jared put on a cape and it was as good of a performance as I’ve seen since I’ve been the head coach here,” Providence’s Ed Cooley said.

“We’re only going to win when everybody in that room decides that whatever we’re doing right now is not working,” Georgetown coach Patrick Ewing said. “They have to decide if they’re going to listen to what we want them to do and get it done.”

It seemed the Hoyas might end their slide against an unlikely opponent when they held a lead early in the second half. But Georgetown’s sloppiness and Bynum’s slick shooting ended any chance of that.

Providence already led by five when Bynum made a pair of free throws. It proved to be the start of a 13-0 personal run for Bynum, who hit three consecutive 3s to make it 59-41, then added another 3 after a basket by Mohammed to become responsible for 16 consecutive points by the Friars.

Bynum’s previous career high was 23 against Temple in 2018 when he played for Saint Joseph’s. A native of nearby Largo, Maryland, who played high school ball at Georgetown Prep, Bynum shot 11 of 15 from the field and 7 of 8 from 3-point range.

“It felt like an ocean,” Bynum said of the basket. “It felt like everything I was putting up was going down. That was pretty fun to see those shots fall. And being back at home with a lot of family and friends here, being able to play in front of them, I was really excited.”

Georgetown committed 19 turnovers, leading to 18 Providence points. The Hoyas were just 5 of 25 from the floor in the second half and made just two field goals in the first 12:26 of the half as Providence pulled away.

The Friars entered the day averaging 11.8 turnovers, but had 10 giveaways in the first half alone. Georgetown had nine of its own, but still took a 30-27 edge into the break. It was only the second time this season the Hoyas have led a Big East opponent at halftime, but advantage didn’t last long.

“I’m proud of our resilience once again, and I’ve used that word a lot this year,” Cooley said. “Sometimes in the past, we would have folded in those situations. We didn’t let our frustration carry over to the second half.”

Providence: The Friars had won their last five games by single-digit margins, but they didn’t require another nerve-wracking finish to complete their sixth regular-season sweep of Georgetown in the last eight seasons.

Georgetown: The Hoyas haven’t won a game since Dec. 15, and just lost three home games in the span of six days. The question facing Georgetown isn’t if it can turn things around this season, but rather whether it can win even one Big East game.

Georgetown recognized longtime play-by-play man Rich Chvotkin during a first-half timeout for working his 1,500th broadcast. Chvotkin began calling Hoyas games in 1974-75 and has since worked continuously except for missing most of the 1990-91 season while deployed as an Army reservist during the Gulf War.

With No. 11 Wisconsin, No. 12 Villanova and No. 13 Michigan State each losing in the last week, Providence is well-positioned to move up at least a couple spots when Monday’s poll is released.

Providence begins a stretch of four of five at home Saturday against DePaul.

Georgetown travels Wednesday to DePaul for the teams’ first meeting of the season.