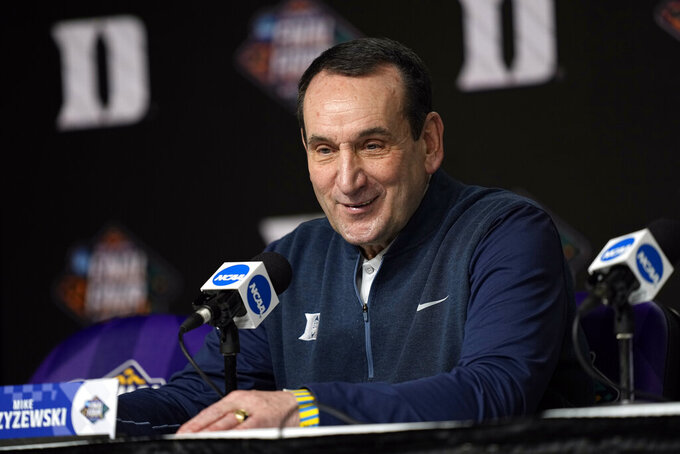 NEW ORLEANS (AP) — In one of his tried-and-true motivational speeches, Mike Krzyzewski outlined his four pillars of team building: making everyone feel important, taking ownership in the team, adapting to setbacks and playing with feeling.

Duke perfected the first three to help Coach K reach his 13th and most amazing Final Four. Next comes the “feeling” part.

Now that the record-setting, 75-year-old coach is in New Orleans, he knows he must walk a fine line between enjoying the moment and letting it overwhelm both him and his team.

“I've always thought that shared emotion is the best,” Krzyzewski said Thursday, as his team settled in for its run at the coach's sixth national title.

The Blue Devils (32-6) meet archrival North Carolina on Saturday in a national semifinal matchup plucked straight from a screenwriters' script.

When Duke lost two games over the span of a week in early March, starting with the 94-81 setback to the Tar Heels in Krzyzewski's final home game, the thought he might be coaching at the Final Four this weekend felt like a dream only a Blue Devils fan could believe.

But once the NCAA Tournament began, Duke started playing better. Wins over Cal-State Fullerton and Michigan State propelled the Blue Devils into the Sweet 16. There, they knocked off Texas Tech, then Arkansas. Krzyzewski passed John Wooden by qualifying for his record 13th Final Four. On Saturday he looks to improve on a record he already holds, by notching a 1,203rd career victory.

One of Krzyzewski's keys to the turnaround was convincing his players that the rest of this season was about them, not him.

“This is our season, too," Duke's Wendell Moore Jr., said before the team's win over Michigan State.

In many ways, Coach K's final team is fulfilling the vision he shared back in 2015 when, fresh off a championship after his 12th run to the Final Four, he gave the keynote address to a gathering of U.S. Olympic athletes and administrators in Colorado Springs.

“You are not paying rent. You're here, it's yours,” Krzyzewski told the rapt audience as he moved through his four pillars of team building.

He talked about his first Olympic experience, back in 1992, when he was an assistant to Chuck Daly on the Dream Team. Krzyzewski was coming off back-to-back titles with Duke and thought he was a “hot ticket.”

His eyes were opened when none other than Michael Jordan approached him after a practice one day. Krzyzewski braced for the inevitable smack talk from the best player in the game, one who happened to have played at North Carolina. Instead, Jordan asked if the coach could work with him on some of his offensive moves.

In his speech, Krzyzewski said he realized something after that workout.

“It's like a totem pole," the coach said. “Michael Jordan was at the top of the totem pole. And I was near the bottom."

But, Coach K said, ”Michael Jordan had a horizontal totem pole, where everybody was important."

Though there certainly is a pecking order on this year's version of the Blue Devils — freshmen Paolo Banchero and AJ Griffin look like NBA lottery picks — at least four players have scored double figures in each of Duke's four NCAA victories. Five players average in double figures for the Blue Devils this season.

In his news conference Thursday, the coach spoke about the players taking ownership in their fate as the season wore on.

“When you go into competition, if you haven't worked, you have a hard time trusting yourself," he said. “But if you've worked, you can trust, but you also own it. You own it more.”

In his keynote address, Krzyzewski said his first two building blocks lead to the third, which is adaptability. In 2022, it played out after the losses to North Carolina, then one week later to Virginia Tech in the Atlantic Coast Conference Tournament, forced Krzyzewski to take a long look in the mirror.

“I just had a good meeting with myself. I said that I've got to do something. I've got to help in some way, and part of it was my approach with them,” Krzyzewski said before Duke's win over Arkansas in the Elite Eight.

Coach K described using the first five minutes of halftime during the Michigan State game to do something different by “just pull(ing) out a chair, and I sit with them for about five minutes and just, ‘OK, here’s where we’re at, and just talk to them.’”

Duke overcame a late, five-point deficit in that one, and now, Krzyzewski has led his team across his proverbial bridge that only a few lucky teams cross. They made it to college basketball's biggest stage.

In his motivational speech, Krzyzewski said one method of getting a room full of superstars to “feel” the mission they were on at the Barcelona Olympics each night was to play the soulful version of the national anthem sung by Marvin Gaye at the 1983 NBA All-Star Game in Los Angeles.

The promise, the U.S. coaches told the Dream Team, was that they would hear that song twice on the day of the title game — once beforehand, then again while they were standing on the podium receiving their gold medals.

The song that closes out March Madness is “One Shining Moment.” Whether Duke will bask in confetti when that song plays at the end of the title game is a big part of the drama that will unfold between now and Monday night.

Whether or not it happens, everyone at Duke is feeling it at this point — even if the coach insists he's been focusing on basketball.

"I didn't do this season to have a storybook,” Krzyzewski said. “I did it because I wanted to coach one more year and I wanted to have a good succession plan for our program. And we've won 32 games, and my guys have been terrific.”