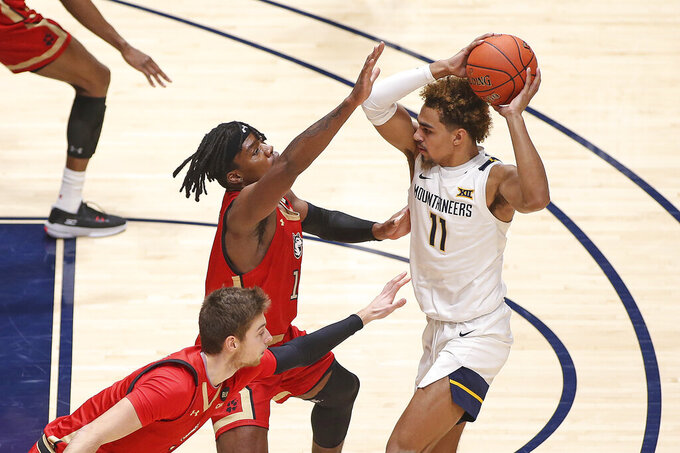 MORGANTOWN, W.Va. (AP) — West Virginia's inside game is its runaway strength entering the heart of the Big 12 schedule.

It's the outside shooting that's giving coach Bob Huggins headaches.

With Derek Culver and Oscar Tshiebwe pounding away in the paint, No. 9 West Virginia used its size advantage to beat Northeastern 73-51 on Tuesday.

Culver scored 18 points, Tshiebwe had 12 points and 15 rebounds and fellow forward Emmitt Matthews added 13 points for the Mountaineers (8-2), who now turn their attention to league play over the next month.

“Having them two down there is always a plus,” Matthews said. "If one of them’s not playing good, the other one usually is. Today, obviously both played good.

"I hope that this happens every game from now on, because I personally feel like if they both play well and we make shots from the outside, I don’t think we’ll lose to anybody.”

The Mountaineers went 2 of 21 from beyond the arc Tuesday. Huggins has praised his team’s efforts in practice, but that hasn’t converted over to game days. The Mountaineers are shooting 30% for the season from 3-point range.

“We came into the year thinking that was the one area that we certainly had fixed," Huggins said.

West Virginia added Tuesday's game after Buffalo canceled for the same date due to COVID-19 concerns. It was the only game on West Virginia’s schedule over a 10-day period, and Huggins wanted to give some of his reserves valuable court time.

Northeastern made the Mountaineers earn it.

The Huskies scored the first two baskets of the second half to trim an eight-point deficit to 34-31. But Northeastern got sloppy with the ball and its momentum quickly fell apart.

Culver, Tshiebwe and Matthews put on a display of inside strength with a variety of layups and putbacks to help the Mountaineers gain control. Culver's steal and dunk gave West Virginia a 59-39 lead with 8:40 remaining and Northeastern got no closer than 15 the rest of the game.

The Mountaineers held a 45-34 rebounding advantage.

“They presented a lot of problems for us,” Northeastern coach Bill Coen said. “As you can see, live and in person, they have a big front line. Those guys aren’t moving around either.”

Tshiebwe had his second double-double of the season after amassing 10 as a freshman. He was the team’s leading scorer and rebounder a year ago, but his production has dropped and he entered Tuesday's game averaging 8.1 points — fifth on the team — and seven rebounds.

“Oscar has struggled a little bit early but I think he’s starting to come out of it from an offensive standpoint,” Huggins said.

Tyson Walker scored 10 points for Northeastern (1-5) but was held seven points below his team-leading average. The Huskies committed 19 turnovers.

Northeastern: The Huskies have two players averaging in double figures for points, not enough production to keep up with most teams over a full game.

West Virginia: The Mountaineers gained back some confidence after nothing went right in the second half of a 79-65 loss at No. 3 Kansas on Dec. 22. Their next test is a pair of league road games two days apart.

West Virginia got 15 players onto the court against Northeastern but lost backup freshman forward Isaiah Cottrell to a lower leg injury in the first half. He did not return.