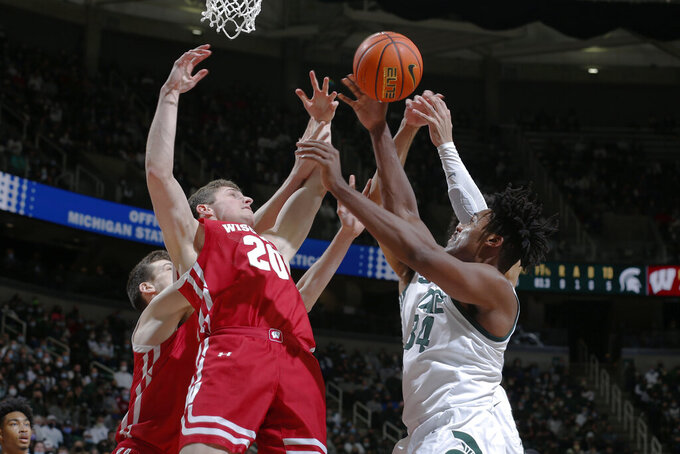 The win lifted the second-place Badgers (19-4 overall, 10-3 Big Ten) to within a half-game of first-place Illinois in the Big Ten Conference.

“I'm extremely proud of my group,” Wisconsin coach Greg Gard said. "The grit and the perseverance and togetherness they showed against a really good team, coached by a terrific coach, I knew we were going to have to play really well to accomplish this."

“That was a poor coaching job," Michigan State coach Tom Izzo said. ”The team wasn't ready to play. We got punked from the very beginning. I thought we played better in the second half, but we got what we deserved. I get credit for doing a good job sometimes, and I should get the blame for doing a bad job. I'm taking full responsibility for this one."

Chucky Hepburn and Tyler Wahl both added 11 points for the Badgers, who outshot the Spartans 47.2% to 41.5%

“We knew we were going to have to have contributions, and were starting to get more and more,” Gard said. “I thought Johnny was really efficient tonight. He didn't force things. He let the game come to him, and when it was time to make plays down the stretch, he made plays.”

Davis had 18 points in the second half.

The Badgers led throughout the first half, thanks in part to ice-cold shooting by the Spartans, whose shooting percentage was below 30% for most of the half until Bingham hit a shot from the top of the key just before the buzzer to cut Wisconsin's lead to 29-23 at the break.

“We didn't play with enough passion,” Izzo said. “I don't know why, but it's on me. We have to do something about that.”

It was the fourth win in five games for Wisconsin, which won in East Lansing for the second year in a row. It was the second loss in a row for Michigan State.

Wisconsin: The Badgers improved to 16-0 in games they've led at halftime this season and kept their surge going.

Michigan State: The Spartans are slumping at the wrong time and likely will fall again in the national rankings. They were ranked No. 13 last week.

With 660 overall wins, Izzo is two behind Bobby Knight for most overall wins by a Big Ten coach. Knight still holds the advantage in Big Ten victories, 353-319. ... Going back to 1998, either Wisconsin or Michigan State has been ranked when they've played each other.