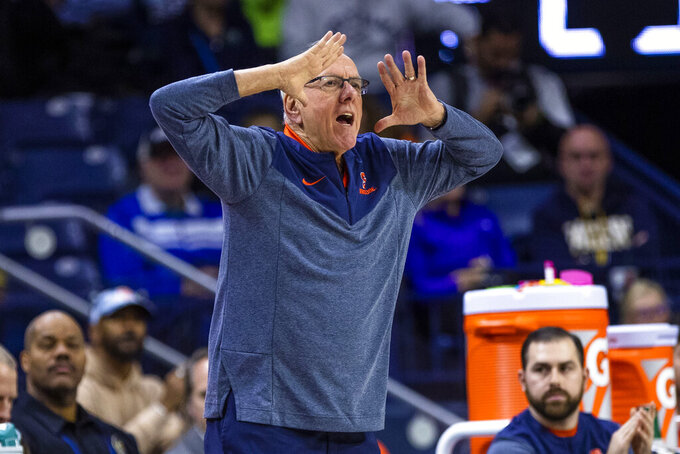 Syracuse head coach Jim Boeheim gestures towards his players as they compete against Notre Dame during the first half of an NCAA college basketball game on Saturday, Dec. 3, 2022 in South Bend, Ind. (AP Photo/Michael Caterina) 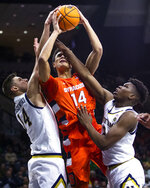 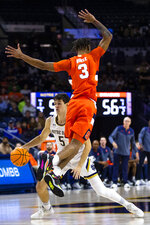 Judah Mintz scored on a baseline drive to give the Orange (4-4) the lead with 13.3 seconds remaining. Syracuse had three fouls to give and used them to cut the clock to 7.1 before Dane Goodwin missed a well-defended 3-point jumper at the buzzer.

The Orange fed Edwards inside as he finished 10-of-15 shooting with 22 points and 14 rebounds for his third double-double of the season. Girard, who averages double figures but had only nine points in his last three games, including zero in a 73-44 loss in Syracuse's previous contest, was 9 of 18 with 20 points, though only 2 of 10 from beyond the arc.

The Orange shot 48%, making only 3 of 18 3-point attempts, but outscored the Fighting Irish 34-18 in the paint and was plus-7 on points off turnovers.

The Fighting Irish (6-2), coming off a 70-52 win over No. 20 Michigan State, shot just 38%, well below their season average of 49%, though they made 11 of 33 from beyond the arc. Goodwin scored 16 points with nine rebounds, Cormac Ryan had 14 points and Ven-Allen Lubin had 10 points and eight rebounds. Nate Laszewski, who came in as the team's leading scorer at 16.9 points per game, had just two points on 1-of-6 shooting.

Neither team led by more than five points in a game with 12 lead changes and 12 ties. It was 35-all at halftime.