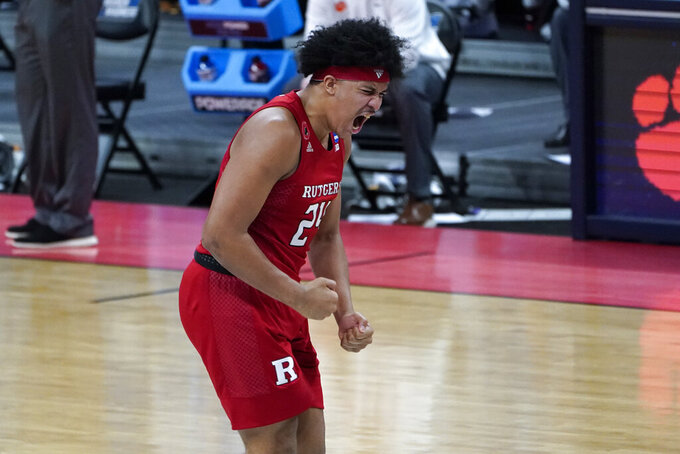 INDIANAPOLIS (AP) — Geo Baker spent part of this week using his voice to raise awareness about inequities in college sports.

He’ll get to use his platform for a couple more days after helping Rutgers to its first NCAA Tournament victory in 38 years.

Baker scored 13 points, including the decisive layup with 10 seconds left, and the 10th-seeded Scarlet Knights toppled No. 7 seed Clemson 60-56 on Friday night in the Midwest Region.

“It’s better than I imagined, honestly,” Baker said. “This is something that we’ve all dreamed of for a really long time, but to hear the Rutgers fans and they’re just going crazy, and just knowing that we survived and advanced in March, that’s something that I’ve always imagined. It was crazier than I ever even pictured.”

Rutgers (16-11) was last selected for the NCAAs in 1991, an appearance that ended with a first-round loss to Arizona State. The Scarlet Knights' last victory in the tournament came in 1983 against a school that’s since changed its name from Southwest Louisiana to just Louisiana.

The drought is over for Rutgers, which will face No. 2 seed Houston on Sunday.

Jacob Young and Caleb McConnell both scored 13 points and Ron Harper Jr. added 10. Baker scored the final five points for Rutgers after the Scarlet Knights built an 11-point lead and nearly gave it all away.

“Certainly for the first time these guys being on this stage, they were locked in from the beginning,” Rutgers coach Steve Pikiell said. “We’ve had great practices this whole week, and I like how they played with that swagger at the end.”

Aamir Sims led Clemson (16-8) with 15 points, but was held in check for most of the second half. Clyde Trapp had 12 of his 14 points after halftime, but the Tigers failed to make a shot in the final four minutes.

Baker has been one of the loudest voices on social media this week during a coordinated effort among some players to raise awareness about inequities in college sports. The players got #NotNCAAProperty trending on social media as they called for rules changes and requested meetings with the NCAA president and lawmakers.

When it came time for the game, Baker was focused on getting Rutgers its sixth-ever tournament victory.

“This is the stuff that you grew up watching on TV, and then my first two years here I’m watching on TV,” Baker said. “So just to be here and to win a game is just really special.”

The Scarlet Knights brought the 1,000 or so fans decked out in red and white inside Bankers Life Fieldhouse to their feet midway through the second half with a 16-2 run to take control.

That was the final made field goal for Clemson. Baker’s 3-pointer out of a timeout pushed Rutgers back in front. Clemson’s missed its last four shots and had a pair of turnovers, including Sims being called for traveling with 43 seconds left.

“Aamir still got a drive. We were going to put it in our best player's hands,” Brownell said.

Clemson reached the round of 16 in its last tournament appearance in 2018, but the Tigers have lost in the first round in four of their last six NCAA trips.

Only once has Rutgers won multiple games in the tournament. In 1976, the Scarlet Knights reached the Final Four, where they lost to Michigan.