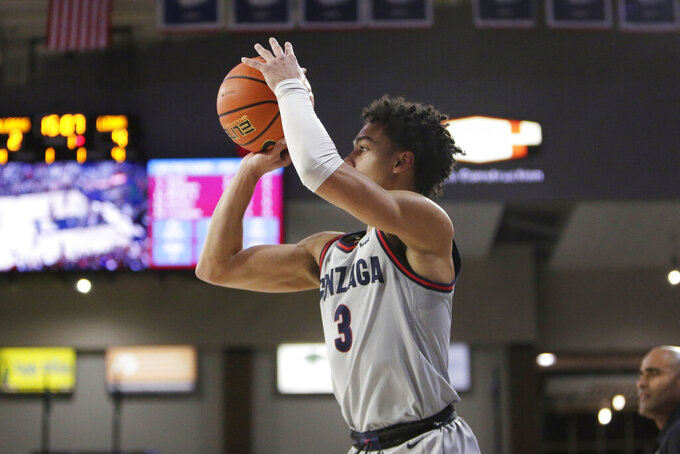 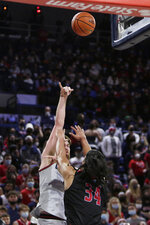 SPOKANE, Wash. (AP) — Chet Holmgren scored his team's opening basket on an alley-oop and never let up as No. 2 Gonzaga pounded Loyola Marymount 89-55 on Thursday night.

The freshman sensation had 21 points, nine rebounds and three blocked shots to help the Bulldogs win their ninth straight game.

Holmgren made seven of eight field goal attempts and all three of his 3-point tries despite getting hit in the left eyebrow in the first half, an injury that required stitches.

He's also confident in his teammates, who shot 61.8% against the Lions and lead the nation in scoring.

“We've got five people on the floor who can score at all times,” Holmgren said. “Everybody is a threat."

Nolan Hickman had 11 points and Julian Strawther and Rasir Bolton scored 10 apiece for Gonzaga (16-2, 5-0 West Coast Conference), which dropped behind top-ranked Auburn in the AP poll this week despite winning both its games last week. Gonzaga has won 63 consecutive home games, the longest streak in the nation.

Bulldogs coach Mark Few pointed to his defense, which held the Lions to 32.8% shooting.

“Our defense kept us in it,” Few said of the first half, when the Zags had trouble getting untracked.

“We rebounded a lot better in the second half, and that got us out running.”

Keli Leaupepe had 12 points for Loyola Marymount (9-9, 2-4), which has lost four of six. The Lions have dropped 25 straight games to Gonzaga dating to their last victory in 2010.

Loyola Marymount coach Stan Johnson declined to speak with a reporter after the game.

The Lions were undone by poor shooting in this one. They made just 22 of 67 shots from the field, including 6 of 22 from 3-point range.

Both offenses were slow to get started, and the score was 10-10 eight minutes into the game.

Drew Timme's basket ignited a 26-9 Gonzaga run, and Loyola Marymount went nearly six minutes without a basket as the Bulldogs built a 36-19 lead at halftime.

Gonzaga sank five 3-pointers early in the second half, three by Holmgren, to build a 56-34 lead. The Zags followed with a 15-2 run to put the game out of reach.

Gonzaga has been in the Top 25 for 107 consecutive weeks, the longest streak in the nation, and is in no danger of dropping out anytime soon.

Gonzaga outscored the Lions 23-0 in fast-break points and 40-28 in the paint.

Loyola Marymount: The Lions came in averaging 69.9 points per game and lacked the firepower to compete with the Zags. ... Loyola Marymount is 3-46 against Gonzaga since the 2000 season.

Gonzaga: The Bulldogs have won 26 straight West Coast Conference games dating to their last league loss in 2020 at BYU. ... Gonzaga leads the nation in scoring at 90 points per game and field goal shooting at 53.5%