No. 12 Texas Tech undefeated at home with win over K-State 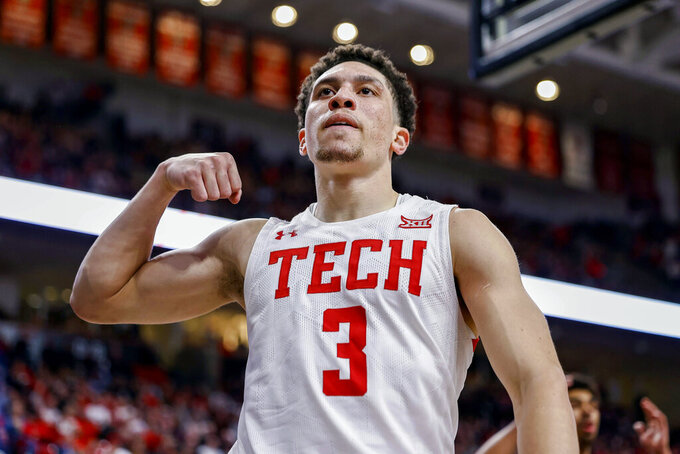 Texas Tech's Clarence Nadolny (3) celebrates after a foul call during the second half of an NCAA college basketball game against Kansas State on Monday, Feb. 28, 2022, in Lubbock, Texas. (AP Photo/Chase Seabolt)

Warren's 23 points included the go-ahead basket with 1:05 left, and the Red Raiders finished undefeated on their home court with a 73-68 win over Kansas State in a back-and-forth game Monday night.

“Nobody has beat us at home and we knew Kansas State wanted to do that tonight, and we knew it wasn't going to be easy,” Warren said. “So just stay the course, stay level-headed the whole game and get the job done"

“This is probably the craziest environment we’ve played this year,” said Selton Miguel, who had 12 of his 14 points for K-State after halftime.

Williams and Warren, first-year transfers but among five Red Raiders seniors recognized before the game, combined for 18 of their last 20 points.

There were nine ties and eight lead changes in the second half, the last on Warren's jumper that hit the front of the front of the rim, bounced up and then fell through to make it 69-68. He added two free throws with 13 seconds left.

“Very proud of him. ... Davion, he kind of took the game over,” coach Mark Adams said. “They were double-teaming Bryson. Bryson obviously has a good game night in and night out.”

Kansas State (14-15, 6-11), which played without standout guard Markquis Nowell (hamstring), missed two 3-pointers in the final minute. Mike McGuirl missed one before Nijel Pack's shot from beyond the arc was blocked by Mylik Wilson — a play K-State thought was a foul.

McGuirl had 18 points while playing all 40 minutes for the Wildcats, whose NCAA Tournament hopes may have taken a fatal blow. It was their seventh Big 12 loss by five points or less, and came two days after their one-point loss at home to Iowa State.

“We were undermanned without Markquis ... but we came and played against one of the top teams in the country in a place that no one’s beat them here,” coach Bruce Weber said. “And, you know, we played them till the end like we’ve done all year.”

Back-to-back 3s by McGuirl and Pack (13 points) tied the game at 50, and Kansas State went ahead on a jumper by Miguel. But the margin was never more than three points for either team until Warren's final free throws in the closest game of Tech's 21-game home winning streak.

The Red Raiders finished the first half with a 14-2 run, with Williams scoring their first eight points in that span and Warren's late 3-pointer making it 39-31 at the half.

Kansas State got even at 40-40 on Mark Smith's 3-pointer less than 2 1/2 minutes into the second half. The Wildcats' senior guard scored seven points in a row over a 42-second span and finished with 11. .

Kansas State: The Wildcats started 9-of-14 shooting with five made 3s to go ahead 23-14 midway through the first half. But they couldn't build on that early momentum, going 3 of 12 from the field the rest of the half without another bucket from beyond the arc.

Texas Tech: The Red Raiders entered the game tied with No. 7 Kentucky (17-0) for the most home wins without a loss this season. “The crowd’s unbelievable here. ... It might be better than Kansas to be honest. The noise, the music, the energy,” Weber said. ... The only of the five seniors in the program multiple seasons is second-year transfer Marcus Santos-Silva.

STILL IN THE RACE

The Red Raiders' only Big 12 title was three seasons ago, when they made it to the national championship game after sharing the conference crown with Kansas State. Texas Tech has to win its finale and get help to share the Big 12 this season. Third-ranked Baylor would have to lose its finale and No. 6 Kansas would have to lose at least two of its final three games. Tech swept Baylor and split with Kansas.

Nowell was Kansas State's second-leading scorer at 12.6 points a game, along with his team-leading 5.1 assists and 2.2 steals a game. ... Kevin McCullar (left ankle), who averages 10 points and five rebounds for Texas Tech, has missed three of five games since stepping on TCU coach Jamie Dixon’s foot after missing a shot.

Kansas State: At home Saturday against Oklahoma, which could become the third Big 12 opponent this year to sweep its regular-season series against the Wildcats.

Texas Tech: The Red Raiders, 3-6 on the road, finish the regular season at Oklahoma State on Saturday.