No. 14 Indiana sinks 11 3-pointers to blow out Nebraska 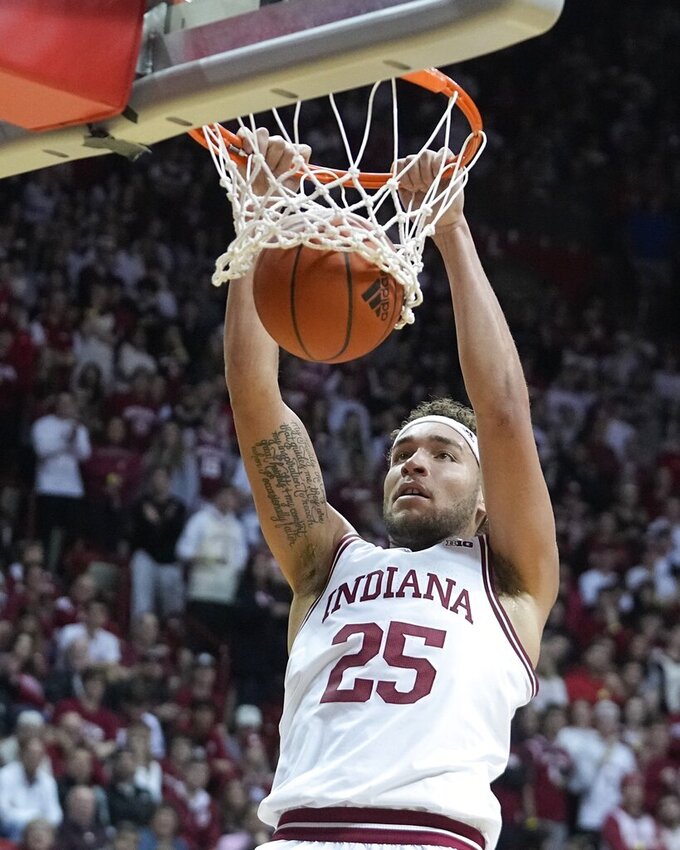 “We didn't have a good game against Rutgers honestly,” All-American senior center Trayce Jackson-Davis said of a 63-48 loss on Sunday. “They obviously took that with a little chip on their shoulders coming into this game because that's not how we play basketball. Coach (Mike) Woodson was kind of telling us we've got to get tougher. They took that to heart.”

Jackson-Davis had the first triple-double of his career and third in program history with 12 points, 11 rebounds and 10 assists.

“Life is pretty damn good when you can make shots,” Woodson said.

“Give them a lot of credit, they made a lot of shots tonight,” Hoiberg said. “I thought they were the most physical team all night long.”

Galloway attributed his breakout game to a summer of constant shooting.

“I did a lot of shooting because I was out with my groin injury, so I couldn't really move much,” Galloway said.

“The good thing is getting him back healthy because he works,” Woodson said. “I have no problems with that kid. He works his butt off on the floor. In practice, he gives you effort. And it spills over into the game. Tonight, he was reckless. Defensively, he was great, and he made shots, which was nice to see.”

The Hoosiers led by as much as 22 in the second half in cruising to a seventh consecutive win in the series. The Cornhuskers trailed by 13 at halftime and were never closer than a seven-point deficit after the break.

Jackson-Davis threw down an alley-oop dunk for a quick 10-2 lead and later fed Bates for a 3-pointer to make it 20-5. Nebraska was forced to call another timeout when Bates converted inside off a Jackson-Davis pass for a 28-13 edge. The Hoosiers were comfortably ahead 39-26 at halftime.

The Cornhuskers were often out of sync offensively without senior point guard and second-leading scorer Sam Griesel, who was a late scratch due to illness. “Listen, this was a monumental challenge even if we had Sam in the lineup,” said Hoiberg, who was told 90 minutes before tip-off that Griesel was out.

The Hoosiers didn't have freshman guard Jalen Hood-Schifino (sore back) for a second consecutive game. The seven-game starter is Indiana's fourth-leading scorer.

Nebraska: After three consecutive road wins against ranked foes dating back to last year, the Cornhuskers never overcame a lousy start. Just like coach Fred Hoiberg in his playing days, the Huskers have grit. They just didn't shoot well enough.

Indiana: A bounce-back win after an ugly conference-opening road loss was imperative. The Hoosiers played with purpose from the outset and never trailed.

Indiana: Versus No. 10 Arizona on Saturday night in Las Vegas.