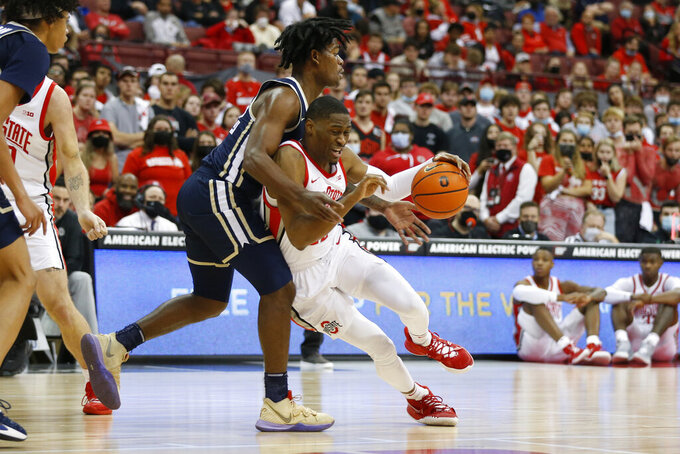 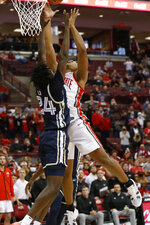 COLUMBUS, Ohio (AP) — Zed Key saved No. 17 Ohio State from a season-opening embarrassment, catching a sharp pass from freshman Malachi Branham in the paint and laying in a buzzer-beater to give the Buckeyes a 67-66 win over Akron on Tuesday night.

Akron was in position for the upset thanks to Ali Ali, who was fouled on a step-back 3-pointer and converted the four-point play to put the Zips ahead 66-65 with 6 seconds left in a game that was tied six times in the second half.

E.J. Liddell led Ohio State with 25 points and 11 rebounds, but fouled out on Ali's late 3-pointer. Key had a career-high 14 points and touched off the opening-night victory celebration with the game-winning layup.

“It was exciting. I couldn’t breathe,” Key said. “It was really exciting."

Ali had 17 points and K.J. Walton 16 for the Zips, who were excruciatingly close to getting their first win over Ohio State in more than century.

The Buckeyes led 36-28 at halftime, powered by Liddell’s 13 points and eight rebounds. But the Zips came out after the break with an 8-0 run. A basket by Enrique Freeman and back-to-back 3s by Xavier Castaneda to tie the game at 36.

“I thought we played well enough to win," Akron coach John Groce said. "At the end of the day, I’m really proud of how our guys competed, the toughness that they showed.”

JUST GET THE W

Ohio State was eager to get rid of the bad taste from an opening-round loss in the NCAA Tournament to Oral Roberts, which was one of the biggest upsets last year. Opening the season with another upset would have been a blow.

“I thought we had a game full of some really good moments from some of our guys,” Ohio State coach Chris Holtmann said. “I thought we were tested.”

Akron: The Mid-American Conference squad was tenacious against the Buckeyes and just wouldn't go away. The Zips finished 24-7 last season and look to be on the way to another good season in the MAC.

Ohio State: It was all the Buckeyes could do to survive unranked Akron. Liddell was the best player on the court, but others — particularly guards Meechie Johnson and Jamari Wheeler — are going to have to contribute more. Ohio State lost both starting guards from last season.

“I just think it’s a work in-progress right now,” Holtmann said. “Meechie had some really good moments. Jamari is still figuring out what all our expectations are for him offensively. With a new backcourt and with some young pieces, we’re a work in progress.”

Holtmann and Groce played together at Taylor University under head coach Paul Patterson, who died in September after battling Alzheimer’s disease. Patterson coached for 34 years at the Indiana school and had 28 winning seasons.

“He had a big influence on both Chris and I," Groce said. "I know he’s smiling down tonight. We’re two of his pupils from Taylor University. Hopefully we made him proud by how our teams played.”