No. 2 Baylor still undefeated after 84-72 win over Auburn 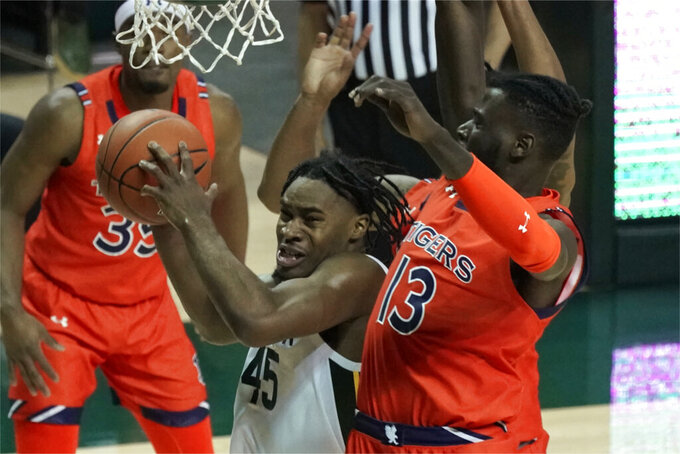 WACO, Texas (AP) — This Baylor win was for Davion Mitchell, and the junior guard did his part against his former team.

Mitchell swished a 3-pointer after losing a shoe and finished with 13 points and seven assists, helping the Bears stay undefeated with an 84-72 win over Auburn in the Big 12/SEC Challenge on Saturday.

“This was a tough game because it was emotional,” coach Scott Drew said. “The team wanted to win it for Davion, and obviously Davion wanted to play well being a transfer from Auburn.”

Matthew Mayer soared for two highlight dunks when scoring 10 of his 13 points in a short spurt as Baylor (16-0) built its lead in the second half. Adam Flagler, a transfer like Mitchell, scored a season-high 19 points. Jared Butler finished with 16, and MaCio Teague had 15.

“And that’s OK, because Butler, and Teague and Davion Mitchell and Flagler are all really good,” Pearl said. “But I think our guys are good too. But that was disappointing.”

Mitchell was coming off a career-high 31 points in Baylor’s 107-59 win over Kansas State on Wednesday night. He played 34 games at Auburn as a freshman in 2017-18 before transferring to Baylor, and Butler was initially enrolled at Alabama, though he never played for the Crimson Tide.

The sock-footed shot by Mitchell, who got a sudden pass from Butler after coming out of his shoe, put Baylor up 59-43 with about 11 1/2 minutes left. That occurred during a 3 1/2-minute span when Mayer had 10 points — two 3s, and his big dunks.

“Matt really got us a great life and a great run where we could get separation,” Drew said.

Mitchell made a nifty pass to Butler, who missed the 3 that Mayer rebounded in midair and slammed home. Mayer then drove the baseline for a two-handed slam before he followed an Auburn miss with a 3-pointer from the top of the key for a 66-45 lead midway through the second half.

“They really just weren’t boxing out, and I went in and got the putback dunk,” said Mayer, who got a emphatic bump from Butler before the two conversed going down the court.

“We have a competition to see who can get the most dunks on the season," Mayer said. "That conversation down the court, that was pretty cool.”

Butler made two free throws with 4:50 left in the first half for a 23-22 Baylor lead. Mayer then helped increase the advantage, making a 3 before grabbing a defensive rebound, driving, twisting and passing to Jonathan Tchamwa Tchatchoua, who made a layup while being fouled and added the free throw.

Auburn: Cooper, a freshman playing only his seventh game, had scored or assisted on half of Auburn's points in his first six games. He finished 6-of-17 shooting (1 of 5 on 3s), with seven rebounds and five assists. The Tigers are 2-4 in the Big 12/SEC Challenge, and are now 1-26 on the road against top-five teams.

Baylor: Baylor is 7-1 in Big 12/SEC Challenge games, the best record by any team in either league in the annual showdown. The Bears have won their last 18 nonconference games overall, one short of the school record set during that 2011-12 season. ... Flo Thamba was scoreless in 17 minutes, but had 11 rebounds.

Baylor will extend its streak to 31 consecutive polls ranked when the new AP Top 25 comes out Monday. It will be the Bears’ 22nd poll in a row ranked in the top five. They had reached the top five in only 12 polls throughout its program history before then.

Auburn looks for a regular-season sweep when it hosts Georgia on Tuesday night. The Tigers beat the Bulldogs 95-77 on Jan. 13.

Baylor travels about 100 miles south to play No. 5 Texas on Tuesday night.