No. 2 Ohio State gets another test with No. 22 West Virginia 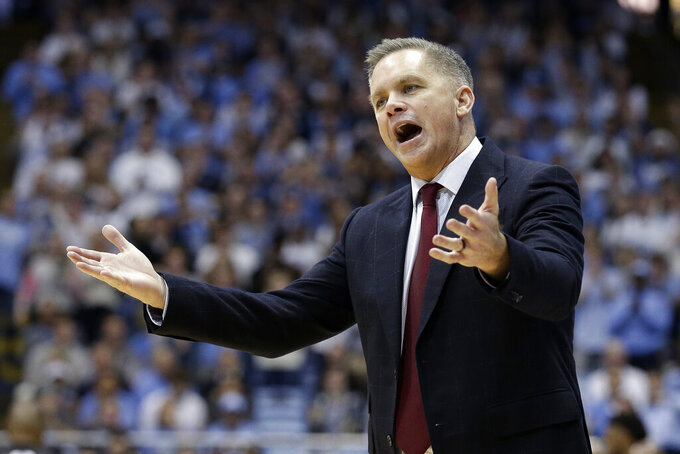 RALEIGH, N.C. (AP) — Chris Holtmann has already seen his Ohio State team claim three wins against marquee nonconference opponents. The second-ranked Buckeyes have a chance to get another before getting into the bulk of their Big Ten schedule.

Fresh off a victory against Kentucky, the Buckeyes face No. 22 West Virginia on Sunday in Cleveland in one of two games on this week’s AP Top 25 schedule matching a pair of ranked teams.

Ohio State (11-1) beat now-No. 10 Villanova by 25 points on Nov. 13, then opened the December schedule by going to North Carolina and winning by the same margin to give Hall of Fame coach Roy Williams his most lopsided home loss in Chapel Hill.

Then came a win against Kentucky in the CBS Sports Classic in Las Vegas over the weekend, a game that saw the Buckeyes shoot 50% while holding the Wildcats to 34.5% after halftime. Ohio State led for nearly 33 minutes of the 40-minute game.

It’s the type of schedule that Holtmann believes has challenged his players for what’s ahead and is a selling point in recruiting.

“We still want to have games that are going to grab the attention of our fans and probably more importantly are going to engage our players and challenge them,” Holtmann said before the Kentucky win.

The Buckeyes’ only loss came Dec. 15 at Minnesota. And their marquee wins could help them secure a high seed in the NCAA Tournament come Selection Sunday, if they keep winning.

Louisville and Kentucky have both been part of the revolving door at No. 1 in the AP Top 25 this season. Now they’re preparing to meet in Saturday’s renewal of the instate rivalry at Rupp Arena in Lexington.

The third-ranked Cardinals (11-1) have lost six of seven meetings with the 19th-ranked Wildcats (8-3), who fell 13 spots in Monday’s poll after losing to Utah in Las Vegas, followed by the Ohio State loss.

Top-ranked teams have quickly suffered losses after taking over the top spot. The good news for new No. 1 Gonzaga is the Zags are guaranteed to make it through the week without a stumble.

That’s because the Zags don’t play until hosting Detroit Mercy next Monday after another poll has been released.

Gonzaga (13-1) became the sixth different team to hit No. 1 this season on Monday, marking the first time that’s happened before New Year’s Day. The record for most teams to reach No. 1 in a season is seven, set in 1982-83. And so far, no team that stood at No. 1 this season won more than twice before stumbling.

The Zags have won five straight since suffering their only loss to No. 14 Michigan in the championship game of the Battle 4 Atlantis in the Bahamas on Nov. 29.

No. 21 Washington (10-2) is headlining the Diamond Head Classic field in Honolulu.

The Huskies opened the tournament by beating Ball State on Sunday, then beat host Hawaii late Monday. That sent Washington into the championship game set for Christmas Day, where the Huskies will face Houston.

Wichita State (10-1) is the leading vote-getter among unranked teams, finishing 13 points behind No. 25 Iowa in the latest poll. The Shockers are off until hosting Abilene Christian on Sunday before opening American Athletic Conference play next week.

Further down the list, Indiana (11-1) hosts Arkansas on Sunday in a matchup between power-conference teams, while Liberty (14-0) carries its perfect record into LSU on Sunday in a game that could secure more votes for next week with a win.