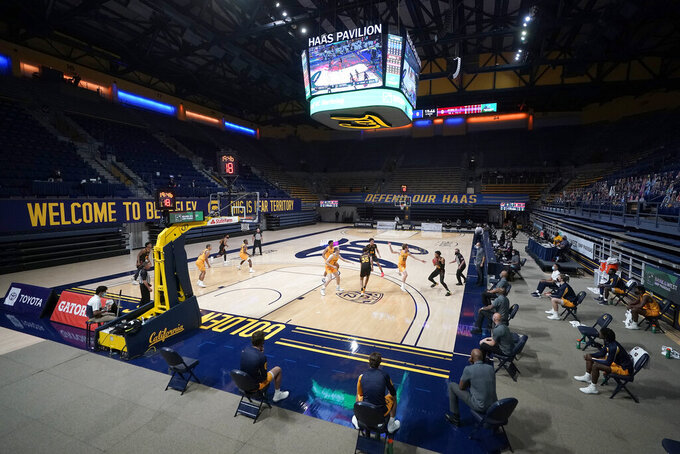 Players and coaches sit apart on the sideline to maintain social distance during the first half of an NCAA college basketball game between California and Arizona State in Berkeley, Calif., Thursday, Dec. 3, 2020. (AP Photo/Jeff Chiu) 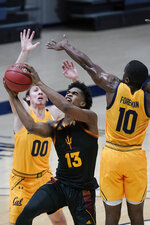 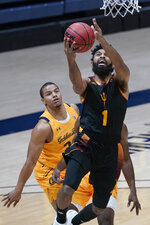 Martin produced another impressive performance on Cal's home floor, finishing with 22 points, five assists and four rebounds as No. 25 Arizona State beat the Golden Bears 70-62 on Thursday night in the Pac-12 opener for both schools.

Prized freshman Josh Christopher added 14 points for the Sun Devils (3-1), and Holland Woods knocked down a key 3-pointer with 2:24 remaining.

“These guys, a number of our guys, have been in some big games the last couple years,” coach Bobby Hurley said.

Freshman forward Marcus Bagley had to be helped off with a lower left leg injury after he went down near midcourt with 1:42 to play. He was scheduled for an MRI and X-rays on Friday.

The injury was believed to be to Bagley's calf and initially was not considered “catastrophic,” Hurley said.

Cal star Matt Bradley had 20 points and eight rebounds but was just 1 for 9 on 3-pointers. He was coming off a 26-point performance Monday in the team's home opener, a 60-49 victory against Nicholls State.

The Bears missed chances and were sloppy with the ball when it mattered.

“We knew we’d have to play fairly mistake-free to have a chance to win,” coach Mark Fox said.

The Sun Devils again were without guard Alonzo Verge Jr., last season’s Pac-12 Sixth Man of the Year, as he quarantines in Tempe, Arizona, for COVID-19 contact tracing. Hurley was clear Verge's absence was not injury-related or disciplinary.

In addition, Sun Devils associate head coach Rashon Burno, operations director Eric Brown and other support staff stayed back at a nearby hotel as a precaution for contact tracing after a staff member not currently with the team tested positive for the coronavirus.

That made pregame preparations more difficult for Hurley as he dealt with the off-court situation.

Bradley converted a three-point play with 14:46 remaining to pull the Bears to 46-43. The Sun Devils answered, as they did every time Cal (2-2) threatened late. The Bears got within 54-53 on Grant Anticevich's putback with 7:52 left before a 7-0 burst by ASU.

Arizona State returned from a split of two games at the Empire Classic in Connecticut, losing 83-74 to No. 3 Villanova for the tournament title.

Martin is averaging 20.3 points over four games at Haas Pavilion. He shot 8 for 11 and made all four shots in the first half.

“Remy Martin is just terrific. He controlled the game and led his team to victory,” Fox said.

Martin averaged 22.6 points over 11 road games last season, good for 13th in the nation — and he was the fifth-highest returning road scorer.

Players from both teams united against racial injustices by taking a knee before returning to standing for the national anthem.

Arizona State: The Sun Devils began 3 for 9 and missed their initial four 3-pointers. They shot 3 for 11 from deep in the first half and finished 6 of 21 behind the arc. ... ASU has won the last six meetings with Cal and improved to 11-4 vs. the Bears since January 2013. ... The Sun Devils have won the last four at Haas Pavilion.

California: Cal grabbed 11 offensive rebounds but couldn't overcome 20 turnovers and 40% shooting. ASU scored 19 points off those turnovers. ... The Bears are 13-6 on their home court under second-year coach Fox — six of those victories vs. Pac-12 opponents.

The Sun Devils don't play for a week. They are scheduled to host San Diego State next Thursday.

Cal hits the road to play at UCLA on Sunday night.