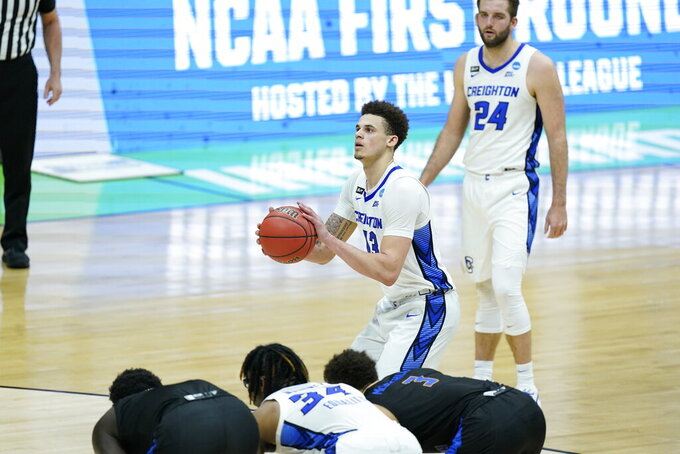 during the second half of a college basketball game in the first round of the NCAA tournament at Lucas Oil Stadium in Indianapolis Saturday, March 20, 2021. (AP Photo/Mark Humphrey) 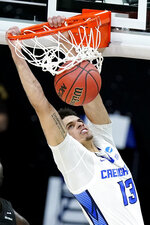 You never would have known it when he went to the line with 16 seconds left for a one-and-one with the BlueJays down a point to UC Santa Barbara on Saturday at Lucas Oil Stadium.

The 57% shooter barely touched the rim while sinking two shots to give fifth-seeded Creighton the lead, and the Bluejays hung on to beat the 12th-seeded Gauchos 63-62 in the first round of the NCAA Tournament.

“It felt really good to step up to the line and hit those two big free throws,” Bishop said. “I’ve been practicing every day so it’s nice to see the hard work pay off.”

The last three weeks for Creighton (21-8) have been have been anything but ordinary since coach Greg McDermott made a racially insensitive remark in the locker room to his players after a game. He received a one-game suspension and returned for the Big East Tournament last week.

The Bluejays' season will continue Monday in the West Region against 13th-seeded Ohio thanks to some unlikely clutch foul shooting.

Bishop was fouled by Amadou Sow on the floor after grabbing an offensive rebound and went to the line with the Gauchos (22-5) up 62-61. The junior delivered like Stephen Curry.

“Just being in the situation, I never thought I’d be here, so playing in March Madness is a dream come true and being the one to hit the big shot at the end at the end of the game was even better,” Bishop said. “So I’m excited to see what we’ve got in store.”

Bishop finished with 15 points and 11 rebounds.

“I thought he really elevated his game and as a result got us back into the game, on both ends," McDermott said.

The Gauchos (22-5) came right down and put the ball in the hands of their best player, JaQuori McLaughlin. The Big West player of the year split a double-team behind the 3-point line and found Sow in the lane, but the 6-foot-9 junior couldn't finish at the rim.

“I was looking to come off and shoot it, but they were on me, double-teaming me and Amadou was wide open,” McLaughlin said. “So I made the right pass right there, and he’s money in the paint.”

Shereef Mitchell rebounded the miss for Creighton and was fouled with a second left. He missed the front of his one-and-one, but it didn't matter as UCSB's full-court heave was way off the mark.

Sow scored the last four points for UC Santa Barbara, including two free throws for the lead with 37.9 seconds left, and finished with 12 points. McLaughlin led UCSB with 13 points.

The Big West champions with a beachside campus were making their first NCAA Tournament appearance since 2011 and nearly won in the Big Dance for the first time in 31 years.

“Our guys competed as well as they can compete,” UCSB coach Joe Pasternack said.

The Bluejays won an NCAA Tournament game for the first time since 2014, when they reached the second round for the third straight season behind McDermott's son, Doug McDermott.

It seemed hardly certain the elder McDermott would lead the team into the tournament this year after he created a firestorm by twice using the term “plantation” as part of an analogy urging team unity.

He was suspended for the final game of the regular season, apologized multiple times and was reinstated. Creighton reached the Big East tourney final before being blown out by Georgetown.

Neither team could break away in this one.

Creighton grabbed the lead back with 3:08 remaining when Bishop finished a pick-and-roll with a reverse two-handed dunk to make it 59-58. After a long UCSB possession that produced no points, Zegarowski made a straight-on jumper with 1:39 left to make it 61-58.

UC Santa Barbara: The Gauchos started fast, making nine of their first 12 shots and taking a 23-15 lead. After grabbing a six-point led in the second-half on McLaughlin's 3, UCSB tried to run the clock and shorten the game, but they didn't get enough good looks down the stretch.

Creighton: McDermott said between Bishop’s free throws and Sow’s miss, it might have been a little divine intervention.

“We were lucky,” he said. “We had a great fan that passed away six or seven weeks ago. Christian was her favorite player. Bette Walker was her name. And I think she slid that layup out of the rim and I think she steered Christian's two free throws into the basket from heaven today.”

Creighton will play for its first Sweet 16 appearance since 1974.