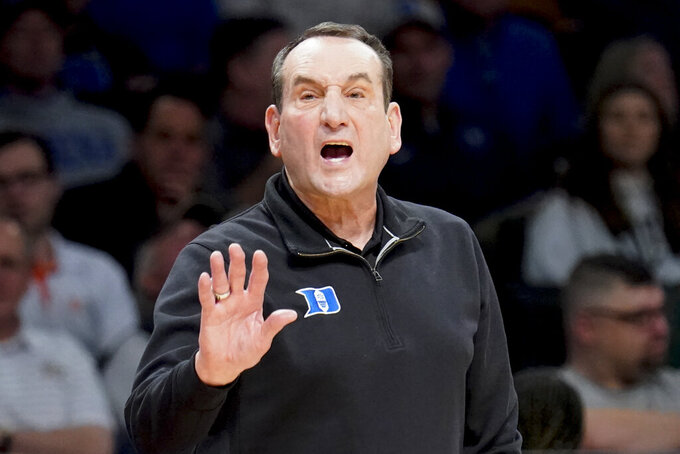 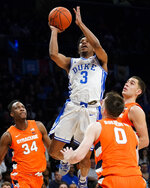 NEW YORK (AP) — Mike Krzyzewski and Jim Boeheim shook hands as they usually do after the two Hall of Fame coaches faced off on the court for the final time Thursday.

There was no need for the friends to say some kind of special good-bye. They know they'll keep in touch and cross paths again.

Coach K is retiring after this, his 42nd season at Duke. Boeheim says he's coming back for a 47th season at Syracuse

“I don’t like to play against him, but we’ll have dinner together,” Boeheim said after the Blue Devils eliminated the Orange from the Atlantic Coast Conference Tournament with an 88-79 quarterfinal victory.

Playing without suspended star Buddy Boeheim, ninth-seeded Syracuse took a one-point lead with 3:32 left in the second half, but top-seeded Duke closed with 10-0 run.

“We got the game we expected,” Krzyzewski said.

Wendell Moore Jr. scored 26 points and Jeremy Roach had 16 in the second half for the Blue Devils (27-5), who advanced to Friday's semifinals at Barclays Center against fourth-seeded Miami.

Coming off a jarring loss to end the regular season against North Carolina in Coach K's Cameron send-off, Duke looked like a team still trying to find its March form.

“We had to learn from that game, but at the same time we had to move on,” said Williams, who scored 15 points. “Can’t be playing mind games with yourself: ‘What if this happens? What if that happens?’ ”

The Blue Devils couldn't shake the Orange until a closing kick that came after Jimmy Boeheim's tip-in put Syracuse up 79-78.

Freshman Paolo Banchero made a tough shot in the lane with 2:13 left to put Duke up 82-79. Moore found Roach for an open 3 about a minute later and Williams' breakaway dunk made the lead eight with 48 second left.

“Wendell really led us down the stretch,” Krzyzewski said. “Jeremy had a sensational game.”

The loss leaves Syracuse (16-17) with a losing record. With the NCAA Tournament out of the question and the NIT highly unlikely, the Orange are looking at their first sub-.500 season under the 77-year-old Jim Boeheim.

“I thought we played with a tremendous purpose today,” Jim Boeheim said.

Playing without ACC leading scorer Buddy Boeheim, Syracuse got a lift from big brother Jimmy Boeheim, who scored a season-high 28 points and was 6 for 9 from 3.

“I was playing for this kid today,” Jimmy said, sitting next to Buddy during a postgame news conference with their dad. “I wanted to do everything I could to get him one more game."

Buddy Boeheim was suspended for the game by the conference for a “flagrant act” after he punched Florida State's Wyatt Wilkes in the stomach during the Orange's second-round victory Wednesday.

“Sitting on that bench I couldn’t be prouder watching my big bro doing his thing,” Buddy Boeheim said.

Buddy Boeheim stood under the basket in a blue warmup suit while his teammates shot around pregame, occasionally grabbing a rebound. Relegated to the bench, he took a spot toward the end, just before the walk-ons but was often the first to greet his teammates coming off the floor.

The Orange lost two games to Duke during the regular season with Buddy Boeheim by a combined 45 points. Syracuse didn't seem to have much of a chance without him.

Joe Girard, who came in averaging 13.5 per game, did his best “Buddy Buckets” impersonation in the first half. He scored 18, including a corner 3 at the buzzer. The junior guard ran off the floor waving on the Syracuse fans to bring the noise, with the Orange leading 40-36.

Syracuse upped the lead to seven early in the second half, but Duke started getting the ball inside and a fourth foul on Cole Swider with 15:00 to go left the Orange struggling to finish the upset.

Syracuse: Buddy Boeheim apologized again, several times, for striking Wilkes and struggled to hold back tears as he spoke about watching his college career come to an end.

“Been thinking about the play the last 24 hours,” Buddy Boeheim said. “I don’t think I've thrown a punch in my life. I never meant to intentionally hurt him.”

Jim Boeheim criticized the decision to suspend his son, saying if the incident was handled properly during Wednesday's game by the officials, at worst Buddy Boeheim would have been ejected and eligible to play against Duke.

But because there was no video review of the play during the Florida State game, it cost Buddy Boeheim the Duke game.

"That makes no common sense to me," Jim Boeheim said.

Krzyzewski stopped short of criticizing the ACC's decision, but did say: “I wish what happened (Wednesday) was adjudicated during the game.”

The 75-year-old Krzyzewski called Boeheim, who he spent more than a decade working with on USA Basketball, his best friend in coaching.

“There's nobody except a former player who I cheer for more,” Krzyzewski said about Boeheim. “His team did him proud.”

Duke is 13-5 in matchups between Krzyzewski and Boeheim.

Duke lost at home to Miami in January.