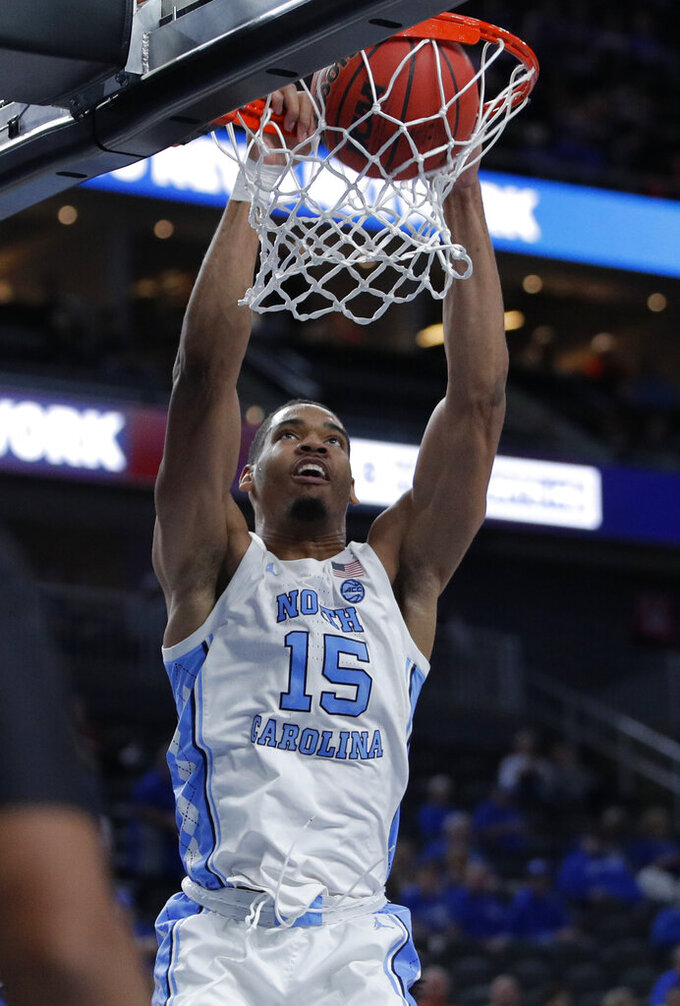 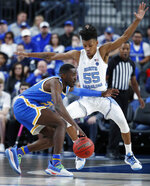 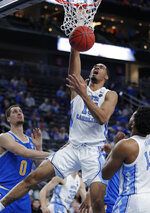 LAS VEGAS (AP) — North Carolina was fully in control in the first half, using a big run to build a double-digit lead. The way the Tar Heels were playing, it looked like their losing streak would come to an emphatic end.

Then the shots stopped falling. UCLA quit turning the ball over as much. The lead went down to one, the losing streak in jeopardy of continuing.

The Tar Heels found a way to gather themselves and pull out the victory, a good sign they're learning how to play without Cole Anthony.

“We didn't play well early and right before the half, had a nice little run and then came out in the second half and just got dumb again,” North Carolina coach Roy Williams said. “But we weathered that storm and then we made a little run.”

The Tar Heels (7-5) led by 13 at halftime, went more than five minutes without a field goal to start the second half and pulled away late to end their first four-game losing streak nine years.

The Bruins (7-5) overcame a turnover-filled first half with a big run to pull within one early in the second half, but never made it all the way back from the early hole.

UCLA shot 4 of 21 from the 3-point arc and had 23 turnovers that led to 24 points for North Carolina.

“We lost the game in the first half, in particular, the last 10 minutes of the first half,” UCLA coach Mick Cronin said. “We're just not capable of sustaining playing smart, playing hard. We got beat to multiple loose balls and the turnovers give us absolutely no chance.”

The Tar Heels limped into Sin City. They lost Anthony, their star freshman point guard, for four to six weeks with a right knee injury and dropped out of the AP Top 25 for the first time since 2013-14, a span of 106 weeks. Three of North Carolina's losses during its streak came against top-five teams, but it also lost to Wofford at the Smith Center.

The Bruins are still trying to find their footing under first-year coach Mick Cronin. UCLA lost to Hofstra before going 1-2 at the Maui Invitational and was coming off a 14-point loss to Notre Dame.

Neither team found many answers early.

The Bruins went on a turnover spree in the first half, coughing it up 14 times, many on weak passes, traveling calls or dribbling off their legs.

“Every possession, especially in games like this, are extremely important and those turnovers definitely hurt us,” Bernard said.

North Carolina had a hard time getting shots to drop, clanging one after another before finding a rhythm late in the first half. Taking advantage of UCLA's turnovers, the Tar Heels went on a 16-2 run to build a 15-point lead and were up 36-23 at halftime.

The start of the second half brought new life to the Bruins.

UCLA scored the first 12 points of the half to pull within 36-35 and held North Carolina without a field goal the opening 5:41.

“We've been terrible coming out in second halves," said North Carolina's Brandon Robinson, who had 12 points. "Coach told us to step up and make shots. We weren't too comfortable. We let them be too comfortable. We have to be better at guarding the ball and making stops.”

The Bruins followed with three quick turnovers, a stretch of one field goal in more than eight minutes and a nearly three-minute scoring drought.

North Carolina pushed the lead to 57-45 and kept it at double digits the rest of the way.

North Carolina is still finding its way with Anthony out, but had a nice bounce back out West after the loss at Gonzaga.

The Bruins had a hard time getting out of their own way, repeatedly committing ugly turnovers that North Carolina converted into points at the other end.

Barnard missed the Notre Dame game with a shoulder injury and was questionable for Saturday.

He came off the bench against North Carolina and showed no ill effects from the injury, hitting 6 of 10 shots.

“He hit a lot of big shots, caught it in the passing lanes, got rebounds, played really, really hard," Jaquez said. “We're glad to have him back and he was a huge help during this game."