Pippen expects Vandy to compete, 'didn't come back to lose' 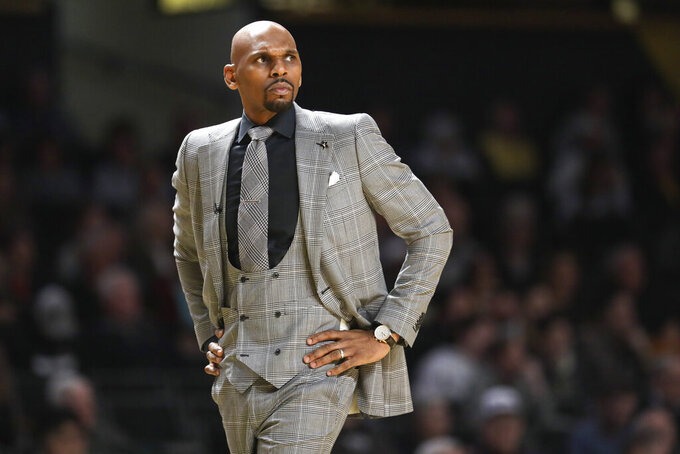 FILE — In this March 7, 2020, file photo, Vanderbilt head coach Jerry Stackhouse watches the action during an NCAA college basketball game against South Carolina in Nashville, Tenn. Stackhouse got his biggest win even before Vanderbilt started practice for this season when he convinced Scotty Pippen Jr. to return for his junior season. (AP Photo/Mark Humphrey, File)

NASHVILLE, Tenn. (AP) — Scotty Pippen Jr. has returned to Vanderbilt and the high-scoring guard expects things to be different. He believes Vanderbilt can be an NCAA Tournament team.

Having Pippen back for his junior season is already a big win for coach Jerry Stackhouse.

“I didn't come back to lose,” Pippen said. “That’s my main mindset coming back. ... I want to be a (NCAA) tournament team this year. I think we can do that.”

Pippen declared for the NBA draft in April but didn't sign with an agent. Son of six-time NBA champ Scottie Pippen, the Vanderbilt guard ranked second in the Southeastern Conference both in scoring with 20.8 points and 4.8 assists a game. He ranked 16th nationally in scoring per game.

Vanderbilt went 9-16 last season but finished the season 3-3, including a win over Texas A&M in the SEC Tournament. The Commodores lost eight SEC games by single digits, five by four points or less.

Stackhouse took all of his staff with him to California to talk with Pippen about returning for his junior year. Stackhouse had ideas of how Pippen could improve his game with another year in college, and the feedback Pippen received from league officials was he needed to show he could win more games and be more efficient on the court.

Stackhouse, who brought in seven new players this offseason, wants Pippen to be remembered as a winner. He also sees the Southeastern Conference preseason player of the year as a first-round NBA draft pick.

“I’m not looking for him to come back for a senior year," Stackhouse said. "I want him to have a hell of a junior year and propel himself up into the top 30 of that draft.”

Even as a sophomore, Pippen was pretty good. He was All-SEC after setting the school scoring record for a sophomore with his 20.8-point average that was the seventh-highest in program history and highest since 1999-2000.

He also was third in the SEC and ninth nationally making 142 free throws. Pippen was second in the SEC averaging 1.7 steals a game. In the SEC Tournament, he set the record for most made free throws without a miss hitting all 25 over two games.

Stackhouse landed 7-foot Liam Robbins as a transfer this offseason, giving the coach his first real post threat at Vanderbilt. Robbins transferred in April from Minnesota where he averaged 11.7 points and 6.6 rebounds last season, and he started his college career at Drake.

The 7-footer is recovering from a foot injury, and Stackhouse said he won't be rushing Robbins back during the non-conference because he wants him ready for the SEC slate.

“We win our share of games that we should win at that level, then I feel like we’re a tournament team and can really get in there and make some noise because we can play a lot of different styles,” Stackhouse said.

Stackhouse has three freshmen in four-star shooting guard Shane Dezonie and a pair of three-star recruits in Peyton Daniels and forward Gabe Dorsey. Robbins is among four transfers all eligible to play immediately in guard Rodney Chatman from Dayton, TCU forward Terren Frank and forward Jamaine Mann from Gardner-Webb.

Vanderbilt's nonconference slate also includes home games against VCU, Temple and Loyola-Chicago with trips to Pittsburgh and SMU. The SEC schedule begins with a visit to Arkansas on Jan. 4 with home-and-home games with No. 10 Kentucky and No. 18 Tennessee.