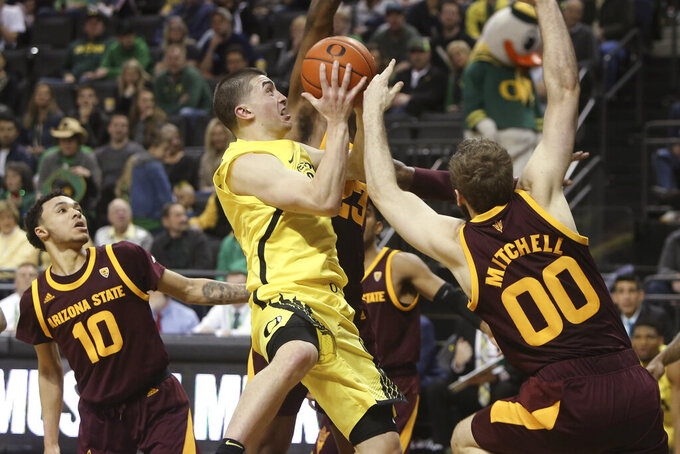 Oregon's Payton Pritchard, center, is fouled while going to the basket between Arizona State's Jaelen House, left, and Mickey Mitchell, right, during the second half of an NCAA college basketball game in Eugene, Ore., Saturday, Jan. 11, 2020. (AP Photo/Chris Pietsch) 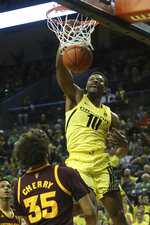 He hits 3-point shots, going 6 of 9 on Saturday night. He drives for baskets. He makes his free throws.

“He controls the game,” ASU coach Bobby Hurley said. “Even when he’s got the slightest of an angle he can get by you.

“He’s so crafty and then he’s a threat from so far away he creates a lot of problems.”

So did ASU’s Remy Martin, who matched Pritchard’s career-high point total. Much of the game was a personal duel between the two high-scoring guards.

Arizona State (10-6, 1-2) remained one of only two Pac-12 teams, along with Washington State, that has never won at Matthew Knight Arena, which opened in 2011.

After Arizona State pulled within 65-60 with 4 minutes remaining, Pritchard responded with a three-point play and the Ducks milked that advantage to the end, even hitting five of their final six free throws after being 10 of 18 before that.

“You hit some free throws and it’s a 15-point game and (the outcome) looks a little different,” Oregon coach Dana Altman said. “We’ve had some nights where we shot (free throws) OK but tonight we shot poorly.

“We’ve just got to do a better job from the line.”

The Ducks started the game shooting well from distance, with five 3-pointers in seven attempts in the opening six minutes on the way to a 19-12 advantage. The Sun Devils rallied to tie it at 24.

“We were just kind of going back and forth and that hasn’t been a good formula for us in the past. I didn’t like the way the game was going. We were scoring but so were they.”

Oregon kept up its torrid shooting and took advantage of ASU missing seven of its last eight shot attempts in the first half for a 40-31 halftime lead.

Pritchard’s sixth 3-pointer pushed Oregon’s lead to 45-31, but the Sun Devils battled back and Martin scored seven consecutive Arizona State points to cut it to 53-48.

The Ducks pushed the lead back into double digits, but again it was Martin responding with another seven-point spurt to draw the Sun Devils to 65-60 before Pritchard’s three-point play put Oregon back up by eight.

“We’ve got a long way to go,” Altman said in a familiar refrain. “It’s a work in progress, it’s going to be for a long time.”

Arizona State: The Sun Devils continue to have problems with Oregon, losing 11 of the last 12 meetings. After three road games to begin the Pac-12 season, Arizona State is home for the next three.

Oregon: The Ducks are 10-0 at home, sweeping the Arizona schools at home for the second consecutive year.

Oregon freshman C.J. Walker was not in uniform for the third consecutive game due to an ailing back. The 6-foot-8 Walker had started six games and was averaging 5.7 points and 3.1 rebounds.