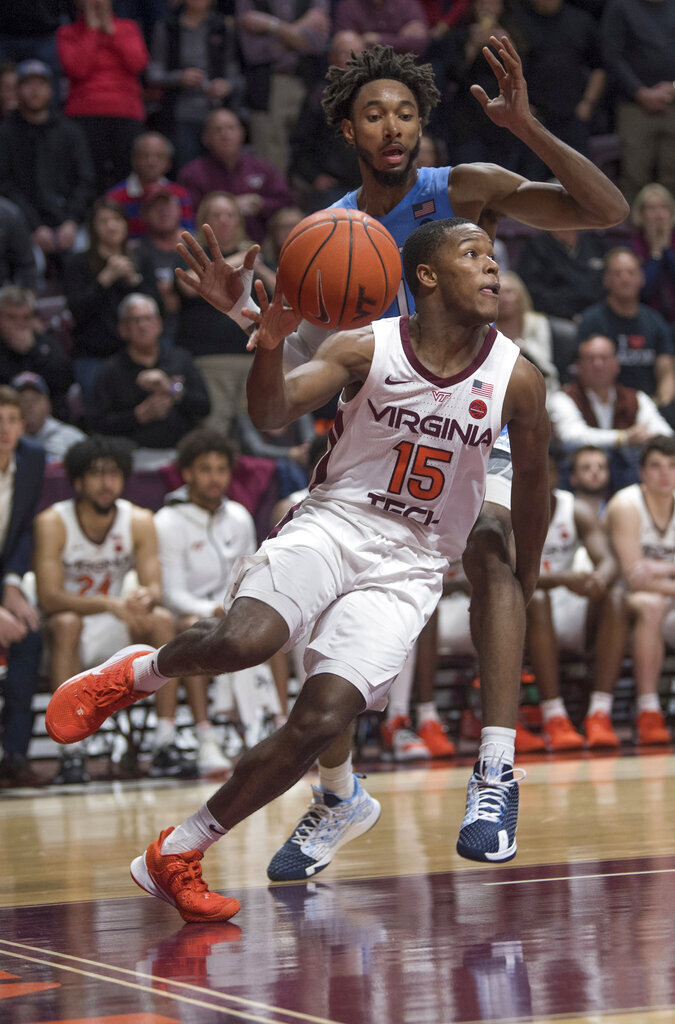 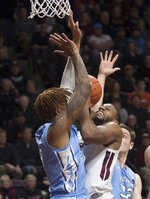 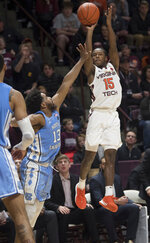 BLACKSBURG, Va. (AP) — Tyrece Radford hadn't made a shot all game, but when the ball came to him with the clock racing toward 0.00, he knew it was time to do something.

The redshirt freshman made a short jumper with 0.4 seconds left in the second overtime Wednesday night and Virginia Tech sent North Carolina to its fifth consecutive loss, 79-77.

“I just was staying on my toes, staying ready in case anything happened," Radford said of the final play, which started with a pass from Landers Nolley. "Luckily, the ball came my way, and I was able to take it off Landers’ shoulder and go finish with contact. It was a big moment, and you live for more moments like that.”

It happened so fast, Radford figured there was only one thing to do. He drove into the lane and made his only field goal of the game from in front of the basket for the Hokies (14-5, 5-3 Atlantic Coast Conference).

“I knew it was time to go,” he said. "The time was running down, and we needed a bucket. It was already double overtime, so I just went to the goal. I was focused on finishing through the contact I knew I was going to receive from it. It (the shot) was big.”

Unlike an overtime loss against Syracuse on Saturday, when Nolley settled for a long 3-pointer that missed in a 71-69 setback, this time, he “made exactly the right play,” first-year Hokies coach Mike Young said. “He learned from his mistake.”

Nolley scored 22 points and Jalen Cone 18 for the Hokies.

“Yes. I think we're getting better,” Williams said, “but I also think we made so many just silly plays and didn't do what we needed to do to make a winning play.”

The Tar Heels, without top scorer Cole Anthony (19.1 ppg) since early December, also played without No. 3 scorer Brandon Robinson (12.1), who the school said continues to suffer from persistent neck pain after a car accident on Jan. 11. Also, freshman guard Anthony Harris (right knee) has played in only five games, and junior forward Sterling Manley (left knee) hasn't played in any.

“If you asked me in August who our top seven players were going to be, I'd say we're missing four of the seven,” Williams said.

North Carolina had a chance to win it in regulation, but Brooks' turnaround jumper from just inside the free throw line hit the back rim and missed. They also came up empty at the end of the first overtime with the score at 67-all.

North Carolina: It was an especially difficult night for guard Andrew Platek, who was jeered whenever he touched the ball with chants of “Airball. Airball” after a poor shot early and seemed somewhat affected. The junior had at least two more airballs to the delight of the crowd and then had a rushed attempt to beat the shot clock rejected by the 6-foot-1 Radford in the second half. Platek finished 2 for 11 from the field.

Virginia Tech: The Hokies didn't have an especially good night from 3-point range, one of their bread and butters plays this year, except for freshman Cone. He hit two 30 seconds apart in the final minutes of regulation to pull Tech within 59-58 and was 6 for 11 on the night. The rest of the Hokies were 8 for 26. The 5-10 guard is now 40 for 72 (55.5%) for the season.

The Tar Heels return home to face Miami on Saturday.

Virginia Tech heads on the road to face Boston College on Saturday.