Tennessee, Michigan square off with Sweet 16 berth at stake 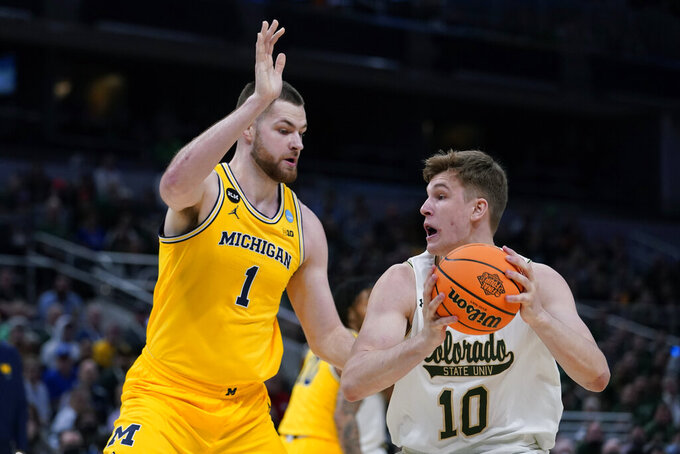 Colorado State forward James Moors (10) drives past Michigan center Hunter Dickinson (1) during the first half of a college basketball game in the first round of the NCAA tournament in Indianapolis, Thursday, March 17, 2022. (AP Photo/Michael Conroy)

INDIANAPOLIS (AP) — Tennessee has already gone farther in the NCAA Tournament than the Vols did in their last appearance.

They opened with an opening-game rout that allowed the Volunteers to get comfortable. Just not too comfortable.

The road gets tougher Saturday in a South Region second-round matchup against Michigan (18-14). The third-seeded Volunteers (27-7) are looking to reach their first Sweet 16 in three years.

“I think we’re playing really good basketball right now,” Vols guard Josiah-Jordan James said Friday. “I think we have a lot of areas that we can get better in. That’s the exciting part about it.”

And they'll need to play well.

The 11th-seeded Wolverines figure to be a tough out, especially if guard Devante’ James is available after sitting out Michigan’s opening-round win in concussion protocol. It’s the first meeting in the tournament between the teams since 2014 when Michigan won the Midwest Region semifinal.

James practiced with the team after missing Michigan's 75-63 victory over No. 6 Colorado State. Coach Juwan Howard said his availability will be a game-time decision and added that he’d be “on his knees praying” for him to ready.

Just seeing James on the floor was encouraging enough for Michigan players.

“It’s not easy for a lot of guys, so it was great to see him back,” Wolverines guard Jace Howard said. “Felt like we were a full team again and made us ready for (Saturday) even more.”

The upside to James’ absence was seeing players such as guard Frankie Collins fill the void with a career effort. He made 6 of 7 shots for 14 points and grabbed six rebounds, helping the Wolverines rally past the Rams after trailing at halftime.

Michigan’s 60% shooting after halftime helped fuel the comeback, though not as much as its defense. Colorado State shot just 29% in the final 20 minutes and finished 35% overall.

Their aim is duplicating that performance against Tennessee, which has won eight in a row and clicked in nearly every phase to blow out Longwood 88-56 on Thursday.

The Vols never trailed as Santiago Vescovi sank six 3-pointers for 18 points to lead five players in double figures. Tennessee also clamped down defensively in holding Longwood to 39% shooting, the ninth time in 10 games it has held an opponent below 40%.

Michigan presents a size challenge with 7-foot-1 Hunter Dickinson, who could be more of factor if James is available to open up the court.

“I think the versatility and the fact that they have some shooters around those guys, you can’t just dare them to shoot the ball, you just can’t,” Tennessee coach Rick Barnes said. “The biggest thing is they know exactly what they’re looking for and exactly how they want to play. They’re an unselfish team. I don’t think they would still be playing if they weren’t.”

Neither would Tennessee, which effectively shared the ball with a school tournament-record 29 assists in its opener.

The Vols know the challenge they face, but are playing with confidence.

“We have a couple more games to win,” guard Zakai Zeigler said. “We want bigger and better things.”