Tshiebwe scores 27 in No. 5 Kentucky's win over Florida 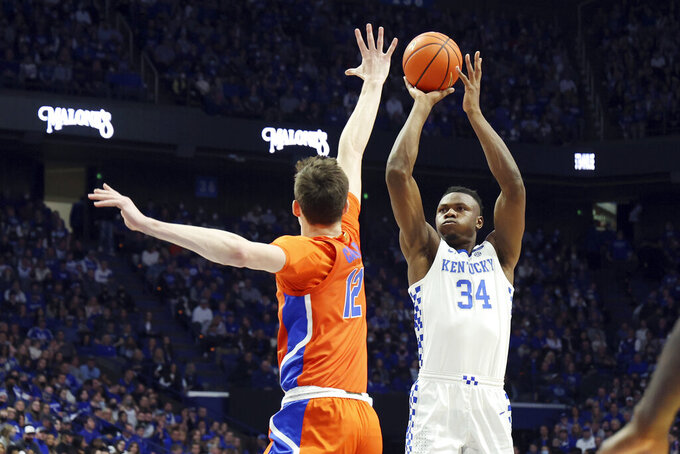 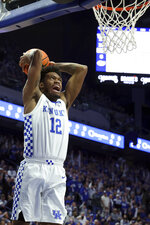 LEXINGTON, Ky. (AP) — Oscar Tsbiebwe seemingly hasn't been distracted by his candidacy for National Player of the Year honors, considering the Kentucky standout continues to go about his business on the court.

Tshiebwe scored 27 points and had 19 rebounds to lead No. 5 Kentucky to a 78-57 win over Florida on Saturday.

Tshiebwe stood out above the Gators and collected a nation-leading 18th double-double of the season and his 11th in a row. The Wildcats (21-4, 10-2 Southeastern Conference) have won six straight.

Tshiebwe promised a young fan Friday that he would attempt to grab 20 rebounds, which provided extra inspiration.

“That's why I came in today with a different mindset to rebound for her," he said. “... I think she'll be more than happy for 19 rebounds.”

TyTy Washington had 10 points for Kentucky, including eight in the second half, before leaving the game with 12:51 remaining with a lower left leg injury. He didn't return. Calipari said an X-ray was negative, adding the freshman guard is “day-to-day.”

“He still might be out a week or two,” Calipari said. “It could be a muscle, it could be something that separated.”

Kellan Grady had 15 points and Davion Mintz added 11 for the Wildcats.

The Gators (16-9, 6-6) saw their four-game winning streak snapped. Colin Castelton led Florida with 18 points, while Myreon Jones, who made seven 3-pointers in a win over Georgia on Tuesday, finished with just six points.

Kentucky made their first four field goals, including back-to-back 3-pointers by Grady and used a 14-2 to produce a 20-6 lead. Grady scored all nine of his first-half points during the spurt, which included 12 unanswered by the Wildcats.

Despite the sluggish start, the Gators used a 15-2 run of their own to narrow the margin to 22-21 with six minutes remaining in the first half. Kentucky regrouped and responded with six straight points — all by Tshiebwe — and led 33-28 at the half.

The Wildcats put the game away by scoring 13 of the first 15 points to open the second half.

“This is a tough place to play and there was a lot of energy," Florida coach Mike White said. “When the second half starts the same way, it can be disheartening. We have to be tougher mentally ... we've got to be better than that and then go on to the next play.”

Kentucky was without forward Jacob Toppin, who suffered a sprained ankle in the first half of Kentucky’s win at South Carolina on Tuesday. The Wildcats have played just 12 games this season with a full roster. One of Kentucky’s key players off the bench, Toppin is averaging six points and four rebounds per game.

Florida: The Gators fell 5-15 against teams ranked in the top 10. Seeking much-needed momentum going into the postseason, Florida’s next three games are against Texas A&M, No. 1 Auburn and surging Arkansas.

Kentucky: The Wildcats continue to build their case for a top seed in the NCAA Tournament and could make a jump in the Top 25 following losses by No. 1 Auburn and third-ranked Purdue this week. The schedule doesn’t get easier for Kentucky, which closes out February at Tennessee, followed by home games against Alabama and LSU and a road game at Arkansas. ... The Wildcats were outrebounded in their previous three games, but held a 41-25 edge over the Gators.

Florida: At Texas A&M on Tuesday.

Kentucky: At No. 19 Tennessee on Tuesday.