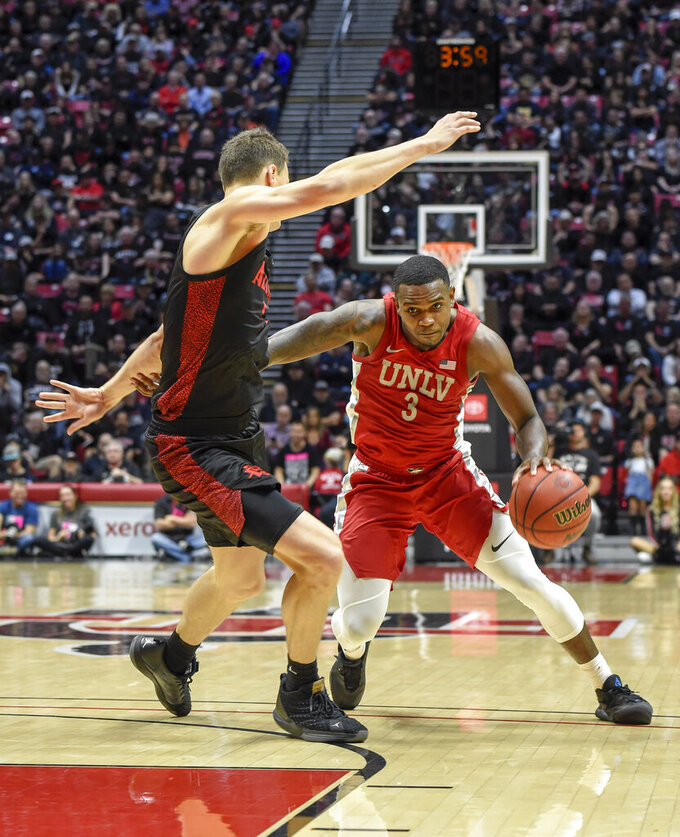 “We lost. It was the first time it happened, so it doesn't feel good,” Flynn said moments after the fired-up UNLV Runnin' Rebels beat SDSU 66-63 on Saturday night, snapping the Aztecs' 26-game winning streak and ending their run as the nation's only undefeated team.

"Well we tasted defeat for the first time and it doesn't taste very good," coach Brian Dutcher said. "Anybody that was saying they thought a loss would be good for the Aztecs, we don't feel that way at all. We're vastly disappointed. We wanted a perfect season, but it didn't happen, and that's college basketball."

SDSU erased almost all of a 14-point deficit when it pulled to 64-63 on Flynn's 3-pointer with 14.5 seconds left. Mitrou-Long was fouled by Matt Mitchell with 11.5 seconds left and made both free throws.

Flynn missed a contested 3-pointer with 3.3 seconds left and the ball went to the Runnin' Rebels. After a long pass down the court, Mitchell ended up with the ball and his desperation shot at the buzzer fell short.

SDSU (26-1, 15-1 Mountain West) unveiled the regular-season conference banner before the game and then looked nothing like the team that raced to the best start in school history. The Aztecs trailed by 14 midway through the second half and were down 11 with 4:32 to go.

They were uncharacteristically porous on defense and sloppy on offense, missing easy shots and committing careless turnovers.

Dutcher said his post-game message to the team was "Disappointment, but it's college basketball. It happens every night, and it hadn't happened to us all year. So now we'll see how we respond to it. And I said all year, even though we hadn't lost a game, I felt if we did, this team is built the right way. They're connected, their chemistry is great and if there was a team able to handle defeat, this one is probably as good as any.”

As the Runnin' Rebels ran off Steve Fisher Court after the game, some players pointed at and jawed with the SDSU student section.

“They've had a historic year. Is there a chance it got talked about in our locker room before the game? Certainly, but I seem to forget what they said,” coach T.J. Otzelberger said.

“It’s a really great win for our program. It’s a culmination of the hard work we’ve been putting in. I credit our guys for being so focused. I’m really proud of our guys.”

Mitrou-Long said UNLV “took it in a disrespectful way, but they can do whatever they want. It’s their home court. We focused on just winning.”

Said Hardy: “I feel like tonight we played a full 40 minutes. We stuck to the game plan and played for each other. Credit to them. They were 26-0 and now they’re 26-1. We had business to take care of and we came here and did it.”

Hardy's jumper gave UNLV a 44-30 lead three minutes into the second half before SDSU pulled within seven, thanks to Flynn's layup and Jordan Schakel's 3-pointer. But Hardy then made a jumper from the free-throw line and a layup to put the Runnin' Rebels back up by double digits.

UNLV took advantage of numerous SDSU breakdowns to take a double-digit lead midway through the first half and pushed it to 37-25 at halftime on a steal and slam dunk by Mitrou-Long.

SDSU had the lead just once, at 14-13 after Flynn’s 3-pointer, and then allowed UNLV to go on a 10-0 run. Mitrou-Long started it by converting a 4-point play when he hit a 3-pointer and was fouled by Flynn. Cheikh Mbacke Diong scored inside and then Hardy hit a floater and Mitrou-Long made a layup.

SDSU’s only points in a four-minute span were two free throws apiece by Mitchell and Flynn. UNLV kept connecting, though, getting a bank shot by Hamilton and a 3-pointer by Mitrou-Long to take its first double-digit lead, 28-18 with 7:12 before halftime.

The Aztecs will drop from their No. 4 spot in the Top 25, which matched the highest ranking in school history.

UNLV: The Runnin’ Rebels lost at home to SDSU by just four points on Jan. 26. They came out strong on the road and let SDSU have the lead just once in the first half, at 14-13 after Flynn’s 3-pointer.

SDSU: Mitchell was recognized before the game for reaching the 1,000-point plateau, which he accomplished in the previous home game, Feb. 11 against New Mexico.